I shut down the morning post before I got to election stuff, and I find myself at loose ends, so I might as well continue. Joe Biden's "Red Rant" in Philadelphia continues to draw fire. At Reason, In Philadelphia, Joe Biden Peddled a Competing Brand of Authoritarianism, "The current president becomes what he criticizes by delegitimizing opposition." Insty disagrees with the premise, OUT ON A LIMB: Biden’s Speech Had It All Backward.

Mr. Trump and his followers, believe it or not, are essentially antifascists: They want the state to stand aside, to impose the least possible interference and allow market forces and entrepreneurial energies to work. Freedom isn’t fascism. Mr. Biden and his vast tribe are essentially enemies of freedom, although most of them haven’t thought the matter through. Freedom, the essential American value, isn’t on their minds. They desire maximum—that is, total—state or party control of all aspects of American life, including what people say and think. Seventy-four years after George Orwell wrote “1984,” such control (by way of surveillance cameras, social-media companies and the Internal Revenue Service, now to be shockingly augmented by 87,000 new employees) is entirely feasible. The left yearns for power and authoritarian order. It is Faust’s bargain; freedom is forfeit.

Herr Professor Jacobsen at LI,  Biden “on a war footing” to dehumanize “roughly half the population who voted against him”. At The Stream, The Horror: Joe Biden and His Demons. "Others have pointed it out, but it really was shocking how President Biden’s recent speech in Philadelphia resembled a cinematic cameo by one of the lesser demons of hell. Biden ranted and raved, his dementia illuminated by hellish red lights in the background. It was like the horrifying ending of Heredity." At PJ Media Stacey Lennox explains Why Republicans Shouldn't Take the Bait and Make the Midterms a Referendum on Trump. At Twitchy, an Australian commentator grades Biden, ‘DIVISIVE, hate-filled … worst speech I’ve heard from a president’: Rita Panahi holds NOTHING back savaging Biden and his ‘red speech’ (watch). Even News Week notes how Biden Denounces MAGA Threat While Democrats Spend Millions Helping Them Win. At Star News, White House Official Claims Biden’s Speech Attacking Trump Supporters Was About ‘Optimism.’ “I see words of encouragement, I see optimism, a commander in chief who’s calling out to all of us no matter our political affiliation.”

After relenting a bit, Biden was back at it on Monday, CNBC, Biden assails ‘Trumpies’ in visits to key swing states as midterm crunch time begins. At Haut Hair, KT wonders Are "Trumpies" the new MAGA Republicans?

Insty reviews Bidens record, MONDAY: Biden gives MAGA Republicans a new name – ‘Trumpies’ – and calls heckler an ‘idiot’ who is ‘destroying democracy’: President launches latest attack on ‘extreme right’ in Wisconsin Labor Day speech. Friday: ‘I don’t consider any Trump supporter a threat to the country’: Now Biden walks back his attacks on MAGA Republicans — and insists he was talking about people who call for ‘use of violence’ and reject election results. Thursday: Biden Repeatedly Stokes Fears of ‘Violent, Extremist’ MAGA Republicans, a ‘Threat’ to America. 2020: Biden embraces healer-in-chief role in return to campaign trail.

At JTN, Virginia's Winsome Sears, Democrats have 'hatred' for black conservatives, says Virginia Lt. Gov. Winsome Sears, "For Democrats "to continue to win, they need to get 80 to 90% of the black vote," said Winsome Sears. "That's why they are so full of hatred when conservatives like me, or libertarians, don't think the way they do.""  At Da Wire, Winsome Sears Explains Why Democrats Feel ‘Hatred’ For Black Conservatives. Hate, mixed with fear.

Matt Margolis remembers That Time John Fetterman Grabbed a Shotgun and Chased Down an Unarmed Black Jogger, and likens it to the Ahmaud Arbery case. Spencer Brown at Town Hall catches how a Pittsburgh Editorial Board Questions Fetterman's Fitness for Office Editorial: Beneath campaign nastiness, legitimate concerns about Fetterman's health. It's only brain damage.

WaPoo snarks Election deniers repeatedly visited Ga. county office at center of criminal probe, video shows. They're not allowed to visit public offices? At Da Mail, EXCLUSIVE: Computer programmer and voting rights activist who bought stolen election machine on eBay says authorities haven't even bothered to CONTACT him about the purchase - despite the fact that it may be first looted ballot tabulator in US history 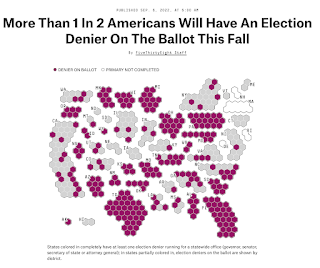 Althouse is on an election security jag. I'm disgusted by the burgeoning "Denier" rhetoric. "Like this, at FiveThirtyEight this morning:" "The election season begins officially today, the day after Labor Day, and if this is the way it's launching, what a horrorshow!" "Since when can we not ask questions about our elections?" "Lake was responding to a reporter who said: "You feel like Joe Biden is dividing the country. Do you feel Donald Trump is doing the same by falsely telling people he won that election when he lost it?"" And, a rare personal opinion, I wish President Biden would support investigating the security of the mechanisms of American elections instead of demonizing the millions of people who feel skeptical.


Why all the intensity against American citizens? It's not going to decrease skepticism. Quite the opposite! We're supposed to be so afraid of getting called "deniers" or being lumped in with the minuscule segment of Americans who breached the Capitol that we will never dream of asking what are you hiding? Why can't you check? Shouldn't you be checking all the time?

Insty quips The simplest hypothesis is that they aren’t checking because they don’t want to know. Or don’t want us to know.

But here's the thing: If a constitutional convention is called and proposes amendments, they still have to be ratified by legislatures or conventions (the convention gets to decide which) in 3/4 of all states:

The Congress, whenever two thirds of both houses shall deem it necessary, shall propose amendments to this Constitution, or, on the application of the legislatures of two thirds of the several states, shall call a convention for proposing amendments, which, in either case, shall be valid to all intents and purposes, as part of this Constitution, when ratified by the legislatures of three fourths of the several states, or by conventions in three fourths thereof, as the one or the other mode of ratification may be proposed by the Congress;

Maybe I'm wrong, but I expect that this will be a pretty serious bar to any particularly radical proposals. If you disagree, tell me this: What amendments do you think a convention could propose that would get the support of legislatures or conventions in at least 38 of the 50 states, and how conservative (or liberal) do you think those amendments would be?
. . .
Just to be clear, I'm skeptical that a convention would produce any particular useful amendments, either.

So abortion, gun control and the electoral college are probably out of the question. What else could you do?