WUSA 9, Creature, believed to be alligator, spotted in Lusby, Maryland


A creature appears to be lurking in the waters of Lusby, Maryland, according to one local photojournalist who snapped a photo of what could be an alligator. 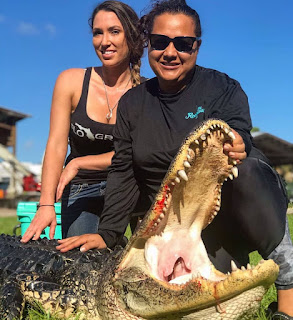 The Maryland publication stated the image has been sent to the Department of Natural Resources in the state for identification, and that original RAW files have been preserved for authentication. They added that the exact location is undisclosed until official substantiation.

WUSA9 reached out to the department, which confirmed that the photograph provides insufficient detail for them to confirm the species.

"We do know of alligators in the past found in that region -- having been illegally released into Maryland waters -- so it is possible," said a spokesperson.

Just last year, a father and son in Lusby spotted a 7.6-foot alligator in the weeds while on a Father's Day fishing trip in the Chesapeake Bay.

It's pretty clear by now that alligators can survive and grow in Southern Maryland waters. Whether they can breed is another question. First of all, we would need enough adult alligators that they have a reasonable chance of encountering another during breeding season. I have no doubt our summers are warm enough to support the breeding, and hatching of the baby gators, but would the baby gators have enough time to grow enough to handle a typical (let alone a cold) Maryland winter? 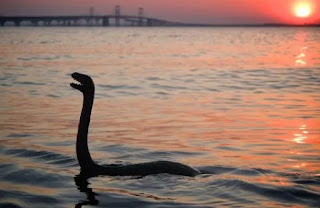 And just for fun, an Indian student's take on Chessie. Otakukart, The Chesapeake Bay Creature: Chessie The Sea Monster


A long slithering creature was crawling below the surface of the waters stretching from Cape Henry to Cape Charles when the Captain of an anonymous ship peeped out to check what was causing the whiskering turbulence in the bay near Virginia Beach only to see that a creature with the head of an alien being probing above the rippling blue. The captain’s name was said to be Lawson.

Later in 1934, Francis Klarrman and his fellow fisherman, Edward J. Ward, could see something rumbling in the sea 75 yards from their fishing boat. The creature that was partially out of the water had pitch dark hide, with a horse head the size of a football and its visible body over 12 feet in length. Multiple times it twisted its head to its back to stare at the two men. None were privy to its origins, just that it wanders the Chesapeake Bay.

In the evening, at half past 7, Robert Frew had his friends over to his house to spend some fun time together in the May of 1982. While watching over the cerulean water, the group witnessed “Chessie”, forty feet long and wobbling through the high tide. It beat and struggled, and everyone in the house could have a clear view of it. It was absolutely real to them, and they could not avert their gaze until it disappeared into the darkness, but before it did, they wiped out their camera to catch it on film.

Robert did, a gritty video quality, but evidence nonetheless of that cryptid being that everyone was confessing to having seen but never had any proof of. The recording caught up with the American media but aired first on WJZ-TV. Smithsonian Institution’s Museum of Natural History agreed it to be an animate being, but they were not able to identify it. There was no credibility to the tale with the captain’s endeavor at Virginia Beach, but now, with technology, the locals and everyone in America began to trust the accounts.