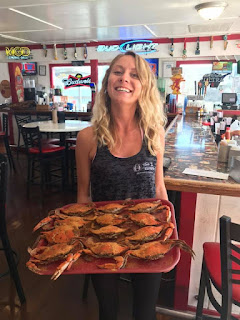 The Chesapeake Bay blue crab, icon of our region, has turned up in Irish waters for the first time ever. And wildlife experts there say its presence could pose a serious threat to native marine life.

Blue crabs are an invasive species in Europe, like snakeheads or blue catfish here on the Bay. Marine scientists consider them a large and aggressive crab species, highly effective at reproducing.

Ruth McManus spotted a dead blue crab washed up among seaweed on Dollymount Strand in Dublin on Feb. 15. She’d never seen anything like it before, and so she sent a photo to Dave Wall at the National Biodiversity Data Centre in Waterford, Ireland.

Wall confirmed the species and tells Bay Bulletin a blue crab claw was also found on Dollymount Strand around the same time. He says it may be from the same crab. Certainly, Irish biologists hope there aren’t more than one. 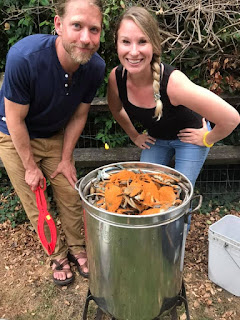 They should be so lucky.

A breeding population of blue crabs began to establish in the Mediterranean Sea around 2012. How did they get there? Wall says it’s likely they arrived via ballast waters from ships traveling from America. There are now blue crab fisheries established on the Mediterranean, some of which import the crab into Europe.

As for the crab that wound up on the Dublin shore, Wall theorizes it may have been an import from a local fishmonger that someone bought and released into the water—not realizing the consequences of introducing an invasive species to local waters. The National Biodiversity Data Centre notes an investigation by the Irish Sea Fisheries Protection Authoriy found an Irish wholesale fishmonger was regularly importing blue crab to sell to Asian customers.

Wall says the invasive blue crab has had a major impact on marine ecosystems in the Mediterranean, “wiping out native shellfish species and fouling and damaging fishing nets.” He notes they have no natural predators in Europe, so the population is difficult to control.

“It’s definitely not a species we want to see becoming established in Ireland,” Wall says.

Will it become necessary for St. Patrick to return to drive the Blue Crabs out of Irish waters? Stay tuned.

I'm not all that worried about Blue Crabs establishing themselves in Ireland. The waters off Ireland are pretty cool year round compared to the Blue Crab habitat on the East Coast of North America. With planktonic larvae, and a large oceanic gyre moving from North America, across the North Atlantic, and down Europe, if Blue crabs could survive there in, they probably would already be there.

The Wombat has Rule 5 Sunday: Lilly Bakamoto waiting at The Other McCain.
Posted by Fritz at 5:14 PM