Election 2020: The Rise and Fall of Blue Anon

Politico, ‘It is a trap!’: Inside the QAnon attack that never happened or "Why fears of violence on March 4, the mythical day Trump was supposed to be inaugurated to a second term, proved unfounded." 'Fuzzy Slippers' (I'm pretty sure that's a pseudonym) at LI, Media-Hyped March 4 Capitol Attack Never Happened, So Now They’re Hyping Future Dates

Democrats and their media cohorts are furiously trying to spin out their Capitol riots Reichstag moment by hyping lunatic conspiracy theories as if they have any basis in reality. The goal is two-fold: demonize Republicans, particularly Trump supporters, and create a climate of fear in order to justify a new war on “domestic terror.”

However, for their fevered dreams of rampant civil rights-violating policies used against American citizens on American soil to come to fruition, they will have to come up with something better than a pretend “threat” from a lunatic fringe group. This time the made-up insurrection against the Capitol was to take place on March 4th. It didn’t.

In fact, so much nothing happened that the headlines warning of the March 4 armed insurrection read like ludicrous parodies of news.

Apparently, the crazy took hold because some QAnon followers were blathering on social media and in obscure online forums about March 4th being the day Trump would triumphantly ride into DC and resume the presidency. I think a brain cell or two died just typing that sentence. Anyway, yep, that’s the ‘threat’ that got DC Democrats, the FBI, the Capitol police, and the increasingly clownish legacy media all wee-wee’d up. 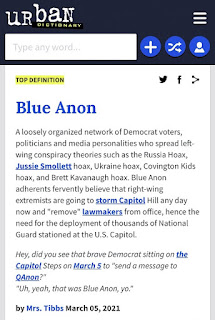 You may have never heard of the new political term “Blue Anon,” and if Google has its way you won’t, either. That’s because the term was invented by online conservatives to push back against media pundits who look for QAnon conspiracies everywhere.
. . .
But guess what? Google the term “Blue Anon,” and you won’t find any reference to it. However, the search engine “DuckDuckGo,” reveals plenty of listings.

Apparently mocking liberals is now a violation of their terms of service.

Althouse takes on the case of the "QAnon shaman""I am not belittling my client... but my client was wearing horns. He had tattoos around his nipples. He wasn’t leading anywhere. He was a follower."

Said Albert Watkins, the lawyer for Jacob Chansley (AKA "The QAnon Shaman"), quoted in "U.S. judge scolds ‘QAnon Shaman’ for appearing on ‘60 Minutes Plus’ without permission" (WaPo).

What is the government interest in suppressing communication by persons charged with crimes? I can understand why someone's lawyer might advise him not to give public interviews, but why is there a requirement of "clearance from the U.S. Marshals Service, the detention facility or the judge" — and what is the extent of the clearance? Is it just about giving interviewers access to a detention facility? If it's nothing more than that, then the lawyer's assumption was correct. If it is more than that... why is it more than that?

Can anyone think of a case where a left-wing activist being accused of a crime has been censored by the prosecutors and judges? I can't , but it happens routinely to conservatives. Examples include Roger Stone, and General Flynn.

"It is the policy of my Administration to promote and defend the right to vote for all Americans who are legally entitled to participate in elections," the executive order stated. "It is the responsibility of the Federal Government to expand access to, and education about, voter registration and election information, and to combat misinformation, in order to enable all eligible Americans to participate in our democracy."

Agency heads will be required to post "relevant information" – like how to vote-by-mail and vote in an upcoming election – on websites and social media platforms. Those who visit vote.gov will be directed to the appropriate state website that provides greater details on how to vote in that individual state.

Federal prisoners who are currently incarcerated with be educated on their voting rights, including whether or not they will be restored once their sentence is completed. Those who are eligible to vote will be registered to do so.

The executive order also establishes an "Interagency Steering Group on Native American Voting Rights" aimed at "protecting voting rights of Native Americans." The committee will include the attorney general, interior secretary, agriculture secretary, labor secretary, health and human services secretary and the VA secretary. Other agencies can be invited as needed. The steering committee's ultimate goal is to increase voter education, registration and turnout in the Native American communities.

Despite having already broken records for the largest number of executive orders signed in the shortest period of time after taking office, Uncle Joe is making his pen work overtime this weekend. To commemorate Bloody Sunday, Biden is signing an executive order intended to “promote voting access” around the country. But can he actually change the nation’s voting laws without new legislation being passed by Congress first? Technically he cannot. But the details of these vaguely defined orders don’t actually make it look like he’s really changing much of anything.
. . .
Biden’s address paints these orders as some sort of sweeping reform, but even the Associated Press describes the details as “modest.” That’s putting it mildly. Let’s look at a few of the specifics. . . .

But from AllahPundit at Hot Hair Whoa: Manchin Open To Using Reconciliation To Pass Voting-Rights Bill? But that's far from clear.

“You have to wonder whether the transition to Harris has already begun,” he said.

The JP,  Trump vows to campaign against Alaska's Republican Senator Murkowski "Decision motivated by Murkowski's support of Rep. Deb Haaland for interior secretary." Is that all?

And from Insty, NOW OUT: The Deep Rig: How Election Fraud Cost Donald J. Trump the White House, By a Man Who did not Vote for Him. Barnes & Noble version in nook is here. We've seen a lot from Byrne already, and he clearly thinks the election was stolen. I'm amazed Amazon is carrying it.