Forget It Jake, It's Baltimore!

Maryland residents received some good news yesterday from Governor Larry Hogan. Starting at 5 pm on Friday, capacity limits were lifted for a wide range of businesses and social activities. These include both indoor and outdoor dining, retail outlets and churches. Gyms and bingo halls were also included, along with bowling alleys and skating rinks. Hogan credited the progress the state has made in vaccinating people and the continued decline in new COVID cases for the decision.

Unfortunately for the people of Charm City, their new mayor was not a fan of Hogan’s decision. Brandon Scott immediately issued a statement saying that the current conditions did not warrant lifting the restrictions in Baltimore on the governor’s schedule. I’m not sure who will be coming for Scott’s scalp first… the Governor or his own residents. (CBS Baltimore)

Baltimore City will not join much of the rest of Maryland in lifting capacity limits and other restrictions on Friday, announced by Gov. Larry Hogan earlier this week.

“The numbers and public health indicators clearly do not warrant a reopening at the Governor’s pace at this time. The Mayor remains confident in Baltimore’s authority to maintain the common sense, local public health mandates currently in place as we continue to navigate this pandemic,” Mayor Brandon Scott’s office said.

Mayor Scott plans to continue to cap indoor dining and retail stores at 25% capacity. The same goes for gyms, churches and other places where people gather. Outdoor dining remains limited to 50% capacity.

We should be asking if Brandon Scott can actually do this and, if so, should he? As to the first question, I see no record of Larry Hogan issuing an order like the one in Texas that forbids local and municipal governments from imposing their own restrictions beyond what is ordered at the state level. If that’s the case, Scott can probably issue his own executive order covering the city of Baltimore. We’ve seen other mayors around the country doing the same thing and it’s not always a bad idea. Cities tend to have very different conditions than the more rural parts of their state. The population density is much higher, so the chance for a new outbreak is increased. Rural and suburban regions have generally been seen as safe to reopen earlier.

But at the same time, this choice could carry a political cost for Scott very early in his mayorship. CBS News talked to a number of residents and business owners yesterday about how they viewed this announcement. They found a couple of people who supported Scott and felt the city wasn’t ready to reopen yet, but the majority seemed to feel otherwise. Various residents expressed their desire to get back outside and socialize now that the weather is finally improving. Some business owners said that they were “hanging by a thread” after a seemingly endless cycle of shutdowns and partial reopenings and they need to return to full capacity or they might still go under.

It's my understanding that for Maryland, the WuFlu restrictions that Gov. Hogan is promulgating are floors, and not ceilings; counties (and Baltimore City is it's own county) are free to be more strict than the state guidance, but not more liberal.

Surprisingly, Baltimore City is not doing much worse than the rest of the state currently when it comes to numbers of cases: 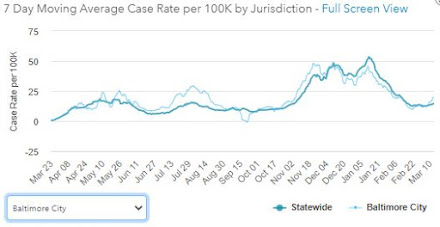 At the same time, I fully expect the majority of Baltimore citizens to do as they routinely do with all the rest of the laws, up to and including murder, ignore them.