The Supreme Court on Monday rejected a bid by former President Trump's legal team to overturn his electoral loss in Wisconsin, which Trump won in 2016 but lost by more than 20,000 votes in 2022 to now-President Biden.

The court did not reveal the final vote or how each justice voted.

In his lawsuit, the Trump team argued the Wisconsin Election Commission enacted policies, such as the establishment of absentee ballot drop boxes, that illegally overrode the state legislature’s power over election rules. The former president filed the suit in late December, asking that the high court review the case before Jan. 6, when Congress was set to certify the results of the Electoral College. The court rejected that call..
. . .
In the unsigned order that included no dissent, the Supreme Court justices refused to hear Trump’s lawsuit that said Wisconsin election officials violated the Constitution. That means fewer than four justices had voted to hear the case.

You can't take the case to the court before the damage occurs (Laches) and you can't take the case to court afterwards because "moot".  From the Wombat's In The Mailbox: 03.09.21 Vox Popoli calls it The End Of The Legal Option, "This concludes the judicial portion of the program. The legislative portion ended some time ago. The question is, is there a third act in the cards?"

Speaking of doubts about the election,  and also from the Wombat's In The Mailbox: 03.09.21, Geller Reports Georgia Fails To Produce Chain Of Custody For 404,000 Absentee Ballots Months After Contested Election. What was that margin of the Biden win in Georgia again? 12,670 votes. And, via the Daley Gator, from Gateway, BREAKING EXCLUSIVE: Ballots In Arizona’s Maricopa County Found Shredded and In Dumpster – Days Before Senate Audit To Begin. Sure, they could be ballots from 4 yrs ago or more, but what do you want to bet? It should be easy to reconstruct enough to check. Also, Georgia Senate Passes Election Reform Bill That Would End No-Excuse Absentee Voting – Zero Hedge and.Judge Orders Election Do-Over As Voter Fraud Proved For 78% Of Mail-In Ballots – Neon Nettle  JTN, Georgia Senate passes election reform legislation eliminating no-excuse absentee voting 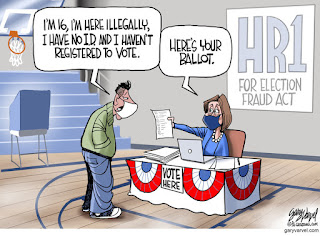 ET, Biden Signs Election Executive Order to Increase Voting by Criminals, only 1 of many bad things. Even one of the Bulwark Boyz, Charles Sykes, What’s Wrong With H.R. 1? A Lot, And That’s Tragic. Stacy Lennox at PJ Media, James Clyburn Says the Quiet Part Out Loud While Insisting HR-1 Must Pass. “If Manchin and Sinema enjoy being in the majority, they had better figure out a way to get around the filibuster when it comes to voting and civil rights.”  HR-1 is the Fraudulent Votes for Democrats Act. 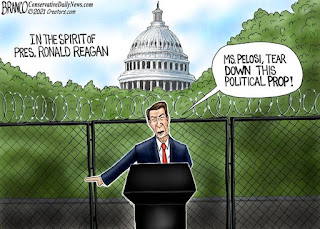 Also from the Wombat's In The Mailbox: 03.09.21,This Ain’t Hell: Troops Might Never Leave DC,   Ace, Racist Madman in Charge of Nancy Pelosi's Taskforce Proposes Permanent Military Force to "Protect" DC "I'm sure the "anti-authoritarians" of NeverTrump will be writing many scathing blogposts about this. Kyle Sammin at Da Fed writes of How Democrats’ Capitol Fortifications Undermine Their Plans For DC Statehood. This Ain't Hell, Troops might never leave DC. Sundance at CTH, Military Extended To Protect DC Politicians Through May 23rd. Rick Moran at PJ Media, Report Suggests Never-Ending Presence of National Guard Troops at the U.S. Capitol and Jazz Shaw at Hot Hair, A Permanent National Guard Force At The Capitol? Make 'em wear funny hats and stand at attention all day.

NYT whines via Hot Hair, Don’t Let QAnon Bully Congress. All three of them. Sundance, FBI Rleases New Video of Suspect Planting Pipe Bombs in DC on January 5th – But Wait for it….

Seeking your help. Comments turned off. See the problem?

Actually, it’s not a problem… it is just an affirmation of intent. The FBI is in the business of creating, engineering and supporting political narratives. The FBI is a political institution, that’s why the request doesn’t align with the system… they don’t really want the public’s help; because it is pushing and promoting the investigation itself that is the goal.

Once you accept the FBI is a political organization with political interests, expectations and objectives, then everything makes sense.

The lawsuit demands "any and all records regarding, concerning, or related to the telephone call between House Speaker Nancy Pelosi and General Mark Milley on or about January 8, 2021," and "any and all transcripts, recordings, and/or summaries of the call, as well as any other records produced in preparation for, during, and/or pursuant to the call." Judicial Watch is also looking for "any and all additional records of communication between Gen. Milley and House Speaker Nancy Pelosi between November 1, 2020, and the present."

At the time, the Wall Street Journal called the speaker's behavior "A Coup of Pelosi's Own."

Nice Deb at Am Great, ‘Blue Anon’ Strikes a Nerve—Naturally, Big Tech Is Trying to Censor It

Am Mil News, China has 1 million people behind propaganda machine to undermine US, top US admiral says, Wa Free Bee, Chinese Dissidents Petition Supreme Court to Strike Down Donor Disclosure Law "Brief argues 'a single exposure is all that is needed to invite harassment and reprisals' against anti-CCP activists"

Sundance on Liz Cheney and being a Battered Conservative No More

Yes, Liz Cheney is toxic to the base of support within the republican party; and yes, the GOP putting Cheney into a very visible position of leadership tells us something. However, the visiblity of Liz Cheney is not because the GOPe are stupidly disconnected from their base, Liz Cheney is purposefully visible because the GOPe wants her there. She is a feature not a flaw or mistake; and the GOP totally gets it.

When you finally accept that the RNC wing of the UniParty hates you, literally hates their base of voters, only then can you begin to break the cycle known as “Battered Conservative Syndrome.”

However, to break this toxic mindset we must stand firm against the abuser. THEY are the problem, not you. THEY work for you, not vice-versa.

Something a little more modern?

Wombat-socho has Rule 5 Sunday: Kalinka Fox and FMJRA 2.0: Scenes From An Italian Restaurant ready for your digital amusement at The Other McCain.
.
Posted by Fritz at 10:48 AM