Let's Not All Jump to Conclusions

I'm generally reluctant to comment on mass shootings before the facts have been given a decent chance to emerge from the fog of media coverage, and they has has paid off numerous times, most recently in regard to the supermarket massacre in Boulder, Colorado.

Yesterday Stacy McCain took it on early  but was circumspect in his coverage: Boulder,  10 Dead, Including Police Officer; Suspect in Custody, Not Yet Identified

There is something . . . off about this story, and I don’t know what it is yet. We saw the suspect walked out in handcuffs and yet, several hours later, police have still not identified him. While I have seen some speculation online about the gunman’s identity, the fact that police did not name him at their press conference strikes me as significant, because why not name him? Certainly, his identity will be public very soon, so what is accomplished by delaying the release of this information?

What this delay has done, in practical terms, is to allow the media to build the narrative that this is a gun-control story. The shooter reportedly used an AR-15-style weapon, and so the narrative is not about the shooter and his motive, but rather about his choice of weapon.

Is it paranoid to suspect that perhaps police delayed the identification of the shooter for this very reason? That is to say, it may be that police believed that publicly naming the shooter would have some undesired political consequence, and so they delayed this, to prevent the public from reacting in an undesirable way. Meanwhile, this delay gives the media a chance to spin it as a gun-control narrative, even though we have no reason to believe that any proposed gun-control measure (short of outright confiscation) could have prevented this particular shooting.

As always in cases like this, I discourage speculation about motives, particularly when we don’t know the identity of the shooter. Yet the delay in identifying the suspect strikes me as significant. Once we learn who it is, perhaps we will be able to deduce the reasons for the delay. 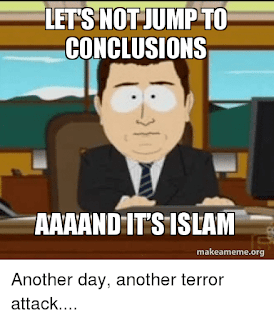 
Early this morning — it was about 2:30 a.m. — I noted that there was something odd about how police were dealing with the shooting in Boulder. Even though they had the shooter in custody, they didn’t name him. Why? What purpose was served by withholding that information?

It was not until about 11 a.m. today we discovered why:

The 21-year-old Arvada man arrested in Monday’s mass shooting at a Boulder King Sooper’s was violent, short-tempered and paranoid during high school, his former classmates said Tuesday.
Ahmad Al Aliwi Alissa is suspected of killing 10 people at the grocery store Monday when he walked in around 2:30 p.m. and began shooting, according to law enforcement. He was taken into custody about an hour later with a gunshot wound in his leg.
Alissa was hospitalized for treatment and is expected to be transported to the Boulder County Jail Tuesday to face 10 counts of first-degree murder.
He attended Arvada West High School from 2015 until he graduated in 2018, Jeffco Public Schools spokeswoman Cameron Bell confirmed Tuesday. He was on the wrestling team his junior and senior years.
“He was kind of scary to be around,” said Dayton Marvel, a teammate on the wrestling team. Alissa once had an outburst and threatened to kill people during an intra-team match, Marvel said. . . .

Now brace yourself for this:

The suspect’s identity was known to the F.B.I. because he was linked to another individual under investigation by the bureau, according to law enforcement officials.

So the FBI actually knew about this gun-wielding Syrian psycho, but they were too busy chasing down “white supremacists” to do anything. 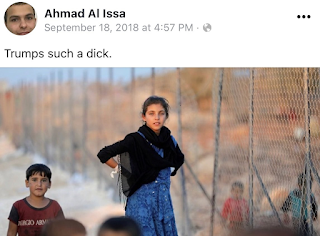 And, of course, he was virulently anti-Trump.

Less fastidious "liberals" early on leapt on the picture of him being led away to assert that he must be a white guy because he survived arrest, only to be embarrassed when he turned out to be Muslim. I could fill a page with examples, but let's got to the Wombat's In The Mailbox: 03.23.21 for some choice examples.