After yesterday's poor showing, I was beginning to be afraid that the 2020 election was fading from the news, but today has reaffirmed my faith that it will continue to fester for many more months.

'Jack Wisdom' at Am Think, The American Police State Is Now Forming. At Human Events, Charlie Kirk, not hiding behind a pseudonym, Under Biden "War on Citizens" Replaces "War on Terror". Well, citizens are more of a threat to the elite than terrorists.

But, from Natalie Winters at TNP, Capitol Police To Remove Fencing, Admitting No “Credible Threat Against Congress”. WUSA9, Security officials start to scale back fencing around US Capitol.

From NYPo, Sedition charges could be looming in Capitol riot, prosecutor says, and since the trial will be held in DC, they'll be show trials at best.

A number of rioters who stormed the the US Capitol in January could face sedition charges, the federal prosecutor who previously led the investigation into the siege said Sunday.

Michael Sherwin told CBS’ “60 Minutes” that he believes the evidence supports charging some of the suspects in the deadly attack with conspiring to overthrow the government.

“I personally believe the evidence is trending towards that, and probably meets those elements,” Sherwin said on the program.
. . .
Sherwin, who recently stepped down from supervising the investigation, also reiterated that prosecutors were looking into the conduct of former President Donald Trump in relation to the attack.

“It’s unequivocal that Trump was the magnet that brought the people to D.C. on the 6th. Now the question is, is he criminally culpable for everything that happened during the siege, during the breach?” Sherwin said.

Thomas J Farnan at TNP,  The Q Lie: The Power-Grab After January 6th Was The Real Insurrection.

It is now obvious that the continued military occupation of Washington D.C. under a phony, Q-pretext is a purposeful overreaction to silence objections over the use of mass mail-in ballots to swing the 2020 election.

In support of our election skepticism, we cite Time Magazine’s comprehensive report, The Secret History of the Shadow Campaign That Saved the 2020 Election.

If everything in that account is taken as true, then Trump supporters were correct to discern a “conspiracy” (Time’s word) to assure a Biden-win, and were well within their constitutional rights on January 6 to protest.

Also from 'Fuzzy Slippers',  Former Fed Prosecutor Seeks Pledge From “Every Business In America” That 2020 Election Was “Accurate” Agree with us, or else:

A former federal prosecutor, Glenn Kirschner, has launched a campaign to force “every business in America” to take a pledge that states, in part, that “The 2020 presidential election was free and fair, and produced accurate, reliable results.”

Any American business refusing to take this pledge, regardless of their own personal beliefs, will presumably be subjected to the cancel mob.

Milton Abdiel at Am Great, The Method in the Madness "A five-year effort to psychoanalyze and pathologize Donald Trump and his supporters bore fruit on January 6. But it won’t end there."

CNN whines Ron Johnson falsely claims there was 'no violence' on Senate side of US Capitol on January 6 at the 'mostly peaceful' Capitol incursion. Taylor Millard at Hot Hair, Blunt: Makeup Of 9/11-Style Commission Over January 6th Too Partisan. That was the point. Fox News, GOP rep says he intentionally sidestepped House metal detectors to get legal standing to sue Pelosi "Georgia Rep. Andrew Clyde is challenging his $15,000 fine." Resist the tyrant.

CNN and NYT enter the fight for HR. 1. CNN, Why the effects of Republican efforts to limit voting aren't clear and the NYT, In Restricting Early Voting, the Right Sees a New ‘Center of Gravity’ and also an opportunity to prevent massive fraud.

At the time, before the videos emerged of late-night counting, local and national media outlets announced that counting had stopped by 10:30 and would resume the next day. However, after the videos emerged, Regina Waller, a county spokesman, told Just the News that she had informed all those media outlets – the ones that claimed that everything stopped at 10:30, that counting had not stopped. Instead, she claimed that she “stated to all media...that although several workers were released to go home, a small team remained behind to assist with scanning ballots.”

Not a single media outlet, however, mentioned that counting would continue. Either Waller or the outlets were truth-challenged. Just the News reported on Sunday that it had obtained more information indicating that Waller’s statement to Just the News was an after-the-fact retrofit meant to cover for a fake narrative on election night itself:


In the email, timestamped at 10:22 p.m. on Nov. 3 and addressed to several county officials as well as State Farm Arena spokesman Garin Narain, Waller wrote: “The workers in the Absentee Ballot Processing area will get started again at 8 am tomorrow.” Waller goes on to request arrangements for news crews hoping to get live shots of the counting the following day.

Reached for comment via email, Waller said the email “was in response to a question received asking when all workers would return.” She did not respond to a request to see the original email to which she was responding.

That wasn’t the only interesting email Just the News obtained:


In a message sent at 11:15 p.m. that night, Fulton County Interagency Affairs Manager Fran Phillips-Calhoun wrote to Waller and several other county staffers: “FYI – [the Secretary of State's office] just sort of threw the team under the bus stating that ‘we had a great day, but we decided to throw in the towel for the night even though the public is waiting...’ on results.”

Again, the message lacks context, but it seems to hint that the official narrative for election night was that everyone was going home and that all counting would stop – except, of course, it didn’t stop at all.

Just the News has more information about mixed messages from Fulton County. Witness affidavits, sworn under penalty of perjury, support the charge that something sneaky happened, and now the officials’ own emails seem to bear that out. You can read the rest here.

The one thing that’s certain about election night is that, as long as the Democrat-run counties across America that deviated from election norms continue to resist scrutiny, at least half of all Americans are going to assume that they’re hiding election fraud that placed the wrong man in the White House. 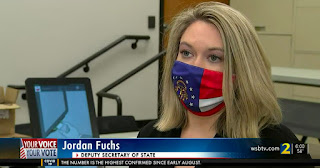 Of course, we know now that Trump didn’t say what Gardner said and hence no crime was committed.

Georgia is a one-party state. That means it is in fact legal to wiretap a conversation even if only one party to the conversation knows it is being recorded. Georgia Code Section 16-11-66 makes an exception to the general prohibition on electronic eavesdropping, excluding by statute “intercepting a wire, oral, or electronic communication where such person is a party to the communication or one of the parties to the communication has given prior consent to such interception.”

That means if one person on the call with the president was recording the call, it has an exception to the broad eavesdropping prohibition.

But that’s not the end of the matter, and you can’t count on Gardner at the Washington Post or NBC to give you the whole story.

Georgia might absolve the person actually running the tape machine, but it also criminalizes in a stand-alone law the act of giving the tape (or electronic file) to a third party.

In other words, whoever published or provided the content to the Washington Post might not enjoy the same protection of the one-party exception when they decided to give the tape or file to someone else. Georgia Code 16-11-62 prohibits:

6) Any person to sell, give, or distribute, without legal authority, to any person or entity any photograph, videotape, or record, or copies thereof, of the activities of another which occur in any private place and out of public view without the consent of all persons observed; or

(7) Any person to commit any other acts of a nature similar to those set out in paragraphs (1) through (6) of this Code section which invade the privacy of another.

Give. Distribute. That’s not the same verb as “intercept.”

Put very simply: Georgia might allow someone to intercept a wire transmission, but it has a criminal statute that makes it a crime to give that interception to a third party, like the Washington Post.