Continuing with the saga of the Washington Post's quiet repudiation of the widely spread story in which they claimed the Donald Trump browbeat the Georgia Asst. Sec. of State to switch the outcome of the election, with invented quotes and all, from NYPo Trump says Washington Post misquoting of his call with Ga. official was ‘media travesty’. Yeah, it even stands out as special among media travesties. Mollie Hemingway on twitter (makes sign of the cross) "Trump said he’s glad Wash Post had courage to admit mistake and that people running Georgia elections who fabricated the quote deserve blame. On Fox News." And who fabricated the quotes? Best guess is Georgia Sec. of State. Brad Raffensperger or one of his underlings, who obviously had the call to recorded, since a copy was recovered from his office: Mike Sylvester at Althouse:

The recording of the phone conversation was found in the trash file of a device that belonged to Frances Watson, the Chief Investigator for Georgia' Secretary of State Brad Raffensperger.

Watson played a key role in "water leak" justification for the late-night counting of votes in Atlanta, Georgia.

In that post, Althouse echoes Gleen Grenwalt who rhetorically asks  "How Do Big Media Outlets So Often 'Independently Confirm' Each Other's Falsehoods?". We know how; they all heard from the same source, shopped by the Democrats. Gabe Kaminsky at Da Fed has 5 Other Totally Bogus Stories Designed To Hurt Trump The Media Got Away With. Only five? Maybe it's a select few.

Insty cites his colleague OUR MILITARY IN DECLINE: Why Did The Guam National Guard Visit Marjorie Taylor Greene’s Office At The Capitol Yesterday? Bullshit at the Military Times Guard officials say troops’ march on Republican congresswoman’s office wasn’t a political statement. LI, Guam National Guard Chief: Our Soldiers Are “Non-Partisan” Despite Marching In Protest On Republican Rep’s Office. The soldiers may be. Their leaders weren't. The officer who allowed this should be court martialed.

Patrick Swan at Da Fed, The U.S. Military Just Became A Political Attack Machine Against Joe Biden’s Opponents. At JTN, the 'Whole thing is crazy': Some officials find Pentagon feud with Tucker Carlson 'undignified'. "We were almost rattled" by the mass military comments, Carlson said Friday on his show. "Then we realized if the woke generals treat us like they've treated the Taliban, we'll be fine. Twenty years later, the Taliban are still here." Matthew Walther at NYPo explains why A politicized US military should horrify all Americans

Poll after poll suggest the armed forces are one of the only institutions still trusted and revered by a majority of Americans. There are good reasons for this: Unlike politicians at all levels of government, the judges they appoint, the federal bureaucracy, the liberal media establishment, Hollywood, universities and Big Business, the military is broadly understood as apolitical.

Long before the Carlson incident, we had evidence that this perception is becoming outdated: In January, the Joint Chiefs of Staff fired off a passive-aggressive letter all but accusing Trump of sedition.

For many, including some in uniform themselves, the armed forces are now simply another part of our woke professional class. And they will use the full weight of their authority in exactly the same manner that progressive scolds do whenever they find their priorities challenged, even when it means violating the apparently sacred norms they claim to defend.

Even Da Beast, Even Tucker Carlson Has a Right to Bash the Military. Rod Dreher at Am Con, US Military: Social Justice Warriors

I still struggle to process the meaning of the Pentagon’s propaganda blitzkrieg against Tucker Carlson. Even if you think Carlson is wrong in his criticism of the woke military (see here for some of it), the fact that the Defense Department has reacted so aggressively is extraordinarily troubling. I would have been troubled by it had the DoD hit out at left-wing media critics like this. But to my knowledge, they never have. They reserved this kind of response for a conservative media figure who questioned the military’s new wokeness. This tells us something. 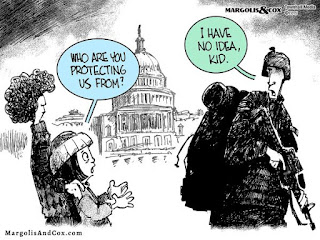 Military Times, Security fencing to be scaled back around US Capitol, officials say. Althouse keeps track of Nancy Pelosi, so you don't have to (but you probably should), "The U.S. Capitol Police, working with federal, state and local intelligence partners, has concluded that 'there does not exist a known, credible threat against Congress or the Capitol Complex that warrants the temporary security fencing.'"


"Therefore, alterations to the temporary fencing around the Capitol will soon be made, and the National Guard presence will also begin to draw down. However, the USCP will continue to monitor the threat posture, and plans will be adjusted if and as needed."

From a press release from Nancy Pelosi.

Senate Minority Leader Mitch McConnell (R-Ky.) has complained that Pelosi’s proposed commission has too “narrow” a focus on domestic violent extremist groups such as white supremacists. Republicans, he has said, want the independent group to look at “political violence” more broadly — a position that reflects uneasiness in the GOP with agreeing to scrutinize the pro-Trump, anti-government groups that stormed the Capitol without also examining left-wing extremists who participated in racial justice demonstrations that turned violent last summer.

Andy Ngo tweets Portland Police arrested 13 at an #antifa riot on Friday. The arrestees were found carrying illegal guns, knives & other weapons. Some are serial arrestees. The DA has already announced some charges are dropped. PM, WATCH: Dan Bongino slams Joy Behar after she claims Antifa is 'fictitious' and 'doesn't even exist'

Immanuel Goldstein found as WaPoo whines  Texas Three Percenters member charged in Jan. 6 riot set up security company to circumvent gun laws, obtain high-grade weapons, U.S. alleges. There were no such weapons at the Capitol.  Julie Kelly at Am Great the Capitol Investigation Seeks to Criminalize Political Dissent "The government's response to the January 6 melee isn’t about justice. It’s about partisan retribution and revenge. And the consequences will be disastrous."

A judge might unseal absentee ballots in Fulton County, Georgia to allow a look into claims of voting fraud related to the November 3rd elections.

A lawsuit argues that there were fraudulent ballots cast and additional irregularities that took place while workers tallied ballots at the State Farm arena on the night of the election, according to AJC, which said that the secretary of state's office has already probed and rejected such allegations. The outlet reported that a judge "said he's inclined to order the ballots to be unsealed and reviewed by experts hired by Garland Favorito, a voting-integrity advocate."

The judge "said he's willing to order the absentee ballots to be unsealed if he's assured their security will not be compromised. He requested a detailed plan, including who would review the ballots, how they would analyze them and how they would secure them," according to the outlet.

A Michigan judge ruled last week Secretary of State Jocelyn Benson (D) broke state law when she unilaterally issued rules related to absentee balloting, legitimizing a key claim made by the Trump campaign in its legal challenges to the 2020 election.

Emails obtained by the Wisconsin Assembly’s Committee on Campaigns and Elections and presented during a hearing Wednesday demonstrate that Genrich usurped the lawful authority of Green Bay City Clerk Kris Teske to run the election, thereby running afoul of Wisconsin Statute § 7.15(1)’s requirement that “each municipal clerk has charge and supervision of elections and registration in the municipality.”

Teske did not. Genrich used $1.6 million in grant money from Facebook founder Mark Zuckerberg’s Center for Tech and Civic Life to essentially replace Teske with Michael Spitzer-Rubenstein, the Wisconsin lead for the liberal National Vote at Home Institute.

When you are at the table with some of the top criminal profilers in the world, talking about industrial scale election fraud, you do more listening than talking. And the listening was interesting. The profilers have zero interest in U.S. elections. Two of them did not vote and had unflattering opinions about both presidential candidates. Their comments were most insightful because they saw the current questions about election fraud so differently than the American media.

To them, 2020 election fraud was an industrial level crime. It was of such magnitude that it moved from the category of an election crime to a sovereign crime.

Sovereign crime. It does have a ring to it.

Sovereign crime is not something we see a lot of in America as our governmental institutions are generally not organized to commit, support or hide a crime.

Most Americans have never seen an organized crime take place, in plain view, supported by or covered up by governmental institutions. But it happens all the time around the world, even in some countries that are quite Westernized.

Althouse And they say there's no election fraud.... "High-schooler and her mother hacked school records to steal homecoming queen election, police say" (WaPo)." People will cheat at anything, if the reward is worthy, and the chances of being caught and sanctioned are low. Presidential elections are no exception.

And more on HR. 1 from Da Fed, Democrat Bill H.R. 1 Would Let People Vote Up To Two Weeks After Election Day. If your candidate doesn't win on election day, you get two weeks to find more! And, Democrats Want ‘Vaccine Passports’ Required To Attend Concerts, But No IDs Required To Vote. Bruce Thornton at Front Page, Federalism Under Siege ,"It's not just an election that's at stake."

AllahPundit at Hot Hair is upset, Alaska GOP Censures Murkowski: We’re Recruiting A Challenger For You In 2022, RINO.