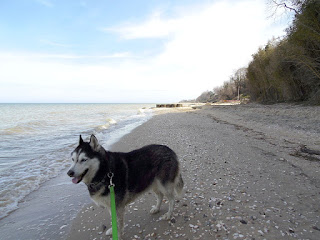 Skye and I were on our own today again, and are likely to be so for a while, as Georgia is recovering from some elective surgery, and will probably not be OK to walk these distances for a while.
Temperatures were in the low 50s, with partly cloudy skies, and a bit of a NW breeze. Not a terrible day. 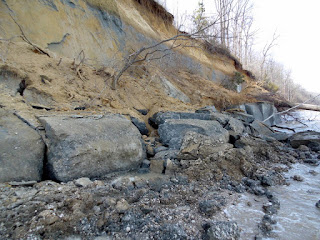 There was a huge fall on the cliffs, just south of the big fall that occurred last June. I haven't been there in a couple of day, but it seems really fresh. The clay in front of it was still very mushy, and I was lucky to get in and out with my boots still on. 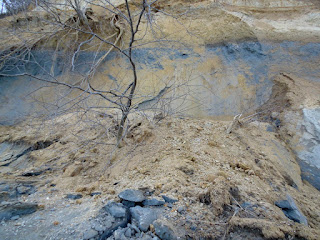 Hopefully, lots of good fossils will wash out in upcoming days and weeks, but I didn't find anything in this mess. Overall, a poor day for fossils, only six teeth. 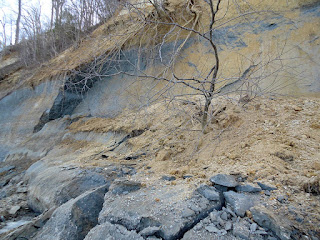 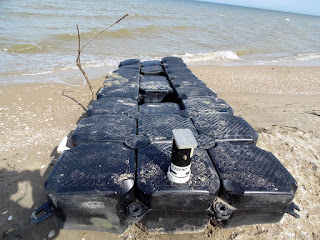 Need a free jet ski dock? This one is washed up near the Calvert Beach boat ramp. Tempting, but I don't have a jet ski. 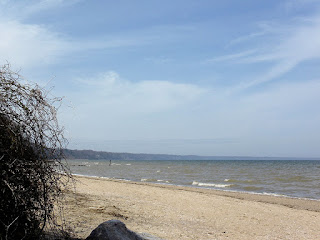 I think I saw my first Osprey today; it's a tiny smudge in this picture. St. Patrick's Day is taken to be the day Osprey's arrive in Maryland, but people on Facebook have been reporting them for a couple weeks. I swear ours are usually a week or more late. The sluggards. The eagles will be overjoyed.
Posted by Fritz at 5:48 PM