On the Sixth Day of Christmas Election 2020 Gave to Me

Alex Nitzberg at JTN, Trump campaign wants Supreme Court to consider Wisconsin election case. I'm sure he does, but it's pretty clear that the Supes are going to stay out of it, unless some new extraordinary development forces them to step in.

From Sundance at CTH, Sidney Powell Gives Her Elevator Pitch to Supreme Court 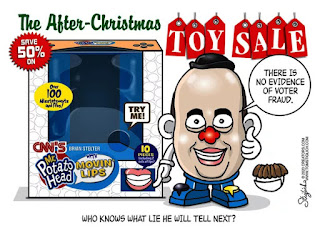 Their analysis, released on Monday by state Rep. Frank Ryan and more than a dozen colleagues, found different vote counts when comparing Election Day data from counties and the Statewide Uniform Registry of Electors, or SURE, system used by Pennsylvania Secretary of State Kathy Boockvar. They also raised suspicions about there being tens of thousands fewer votes in the presidential race than overall ballots.

Lott, a noted crime and gun researcher, alleged the wide-scale vote fraud plagued the recent presidential election, potentially “account[ing] for Biden’s win in” states such as Georgia and Pennsylvania.

On the plan to derail Joe Biden's congressional coronation, David Catron at Am Spec has Help Wanted: One GOP Senator With Guts "Someone needs to decide to have a backbone on January 6." Expecting spine from our legislators is a fool's bet. Via Hot Air, NYT whines Will Pence Do The Right Thing?, by which they mean count the fraudulently obtained electoral votes for Biden. Sadly, he probably will. And at Am Think Edward Davis thinks GOP congressional challenges to electors would be a catastrophic tactical mistake. More catastrophic than a Harris/Jill Biden administration? I'm not convinced.
Tim Pierce at Da Wire, Michigan AG Wants To Sanction Attorneys Over Election Fraud Lawsuits. Trump Responds. Sure, make it illegal to protest voter fraud.

Michigan AG Dana Nessel Pursues Sanctions Against Lawyers Questioning Election https://t.co/Hb5xckedoN via @BreitbartNews These lawyers are true patriots who are fighting for the truth and, obviously, getting very close. AG should be sanctioned. Fight on!

Fox, Georgia judge, Stacey Abrams' sister, rules against voter purge before Senate runoffs. 100%Fedup.com, Obama-Appointed Judge Who is Sister of Stacey Abrams Blocks Purge of 4,000 Voters in Georgia Before Senate Runoff Election. Ace, Stacy Abrams' Sister Is Judge Appointed by Obama (Of Course), and She Just Ruled that a County Cannot Clean Up Its Voter Rolls. Gee, I wonder why? 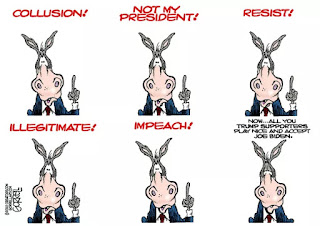 In other words, this clearly-compromised judge ruled in favor of her sister's vote fraud organization.

A county agreed to take 4,000 names off the voting rolls. For a very good reason: the Post Office had received a change-of-residence notification from these people, indicating that they had moved and were no longer eligible to vote from their old address.

Stacy Abrams' corrupt sister ruled that just because you've moved out of your address, doesn't mean you can't still vote from there.

If you're a Democrat, at least.

Regarding the two outstanding house seats, which look like they should fall to the Republicans, David Avella at WaEx wonders Are House Democrats prepared to steal two elections? Yes, they are.

Hart is challenging the certified election results and seeking for the U.S. House to declare her the winner. The same may occur in upstate New York, where Democratic incumbent Rep. Anthony Brindisi and former Republican congresswoman Claudia Tenney are separated by fewer than 20 votes.

House Democrats refusing to validate certified election results in two closely contested districts is not exactly a crime. However, it certainly would rob voters in Iowa’s 2nd Congressional District and New York’s 22nd District of what they decided with their votes. This would unlikely bother Speaker Pelosi, as it would give her two more Democratic votes that are completely beholden to her. It is almost impossible to imagine a single action by Speaker Pelosi and House Democrats doing more to unite House Republicans and becoming more determined in their opposition.

Recently, some House Democrats have openly suggested they might ignore these outcomes and simply seat the Democrats based on the Rules of the House that allow that body to make the ultimate decision as to who is allowed to hold office in the chamber.


It is certainly in Democrats’ playbook for keeping power and control. In 1985, when the Democrats were in the majority in the House, there was a very close election in the 8th Congressional District of Indiana. Republican Rick McIntyre was certified the winner by the Indiana Secretary of State. However, the House Democrats chose to ignore that outcome and seat the Democrat, Frank McCloskey. No Republican Speaker has ever required the House to take such action.