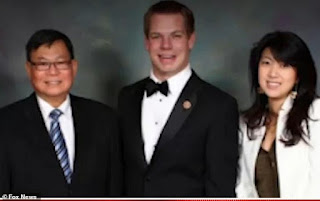 Lots of follow up on news that Eric Swalwell's early career was assisted by a presumptive Communist Chinese spy, Fang "Christine" Fang early in his carrier, until the FBI took an interest in her, and gave him a "defensive briefing", and she split for China. Stacy McCain: Eric Swalwell’s Chinese Honey Trap

When Chinese agent “Christine” Fang first befriended Eric Swalwell, he was just a city councilman in a suburb of Oakland, California. So how did she know to target him specifically? Swalwell challenged incumbent Rep. Pete Stark, who had Obama’s endorsement, in the 2012 Democratic primary. Out of all the local politicians in the San Francisco Bay area, why would Fang have made Stark a target of her influence operation, unless Fang’s Chinese spymasters had some inside knowledge?

Not to get too paranoid here, but it has been reported that Fang raised money for Swalwell, and you have to wonder if Beijing’s influence was a “thumb of the scale” of that 2012 election. In other words, Fang targeted Swalwell because China knew he would beat Stark — the fix was in.

That’s just a theory, of course, but it is a reasonable inference, given what we know about Swalwell’s pro-China/anti-American agenda. . . . 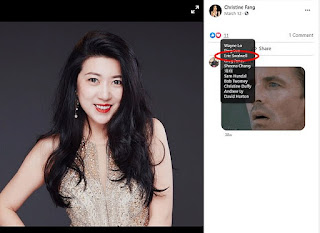 It does make you wonder what Fang, and the Chinese communists saw in Swalwell to make them think it would be a  good idea to support him. Fox, Swalwell refuses to explain relationship with suspected Chinese spy accused of affairs with mayors. JTN, Investigators delve into suspected Chinese spy’s' ties with Swalwell staff ""There were concerns about who else in his office she was close to," one intelligence official told Just the News. "Who could give her information or help her achieve her goals?""


The most amusing question is the most obvious one, Jordan Davidson at Da Fed, Swalwell Refuses To Disclose Whether He Had A Sexual Relationship With A Suspected Chinese Spy. So that's a yes. Even more amusingly, from Ace, Tucker Carlson: We Reached Out to Eric Swalwell to Ask If, As Has Been Reported, He Had Sex with Confirmed Chinese Spy Fang Fang; Swalwell Told Us He Could Not Answer, Because the Answer Might be "Classified" and from David Krayden at Da Caller, Matt Gaetz: If Swalwell Can Say His Sex Life Is Classified, ‘Bill Clinton Is Probably Kicking Himself’ Wishing He’d Said That.

More than once, I’ve said “screw the Chinese communists.”

Little did I know how closely Swalwell was listening.

Ya know, there’s actually a tiny part of me that wants to congratulate @RepSwalwell for getting a real, live woman to be intimate with him, even if she was a Chinese Communist spy. It’s gotta be so much harder for him now after he shat himself on live TV.

Yeah,  QAnon is a problem on par with Communist China. Ace, Granny Rictus McBotoximplants: Republicans Are Focusing On Eric Swalwell's Adulterous Sexual Affair with Chinese Spy to "Distract from QAnon".

Da Mail, Eric Swalwell refuses to admit wrongdoing over 'top secret' friendship with Chinese spy Fang Fang and demands probe into who leaked story - as he refuses to say if he slept with her (and she's STILL Facebook friends with his dad and brother) and SECOND Democratic congressman cuts ties with Fang Fang: California Rep Ro Khanna ends Facebook friendship at same time as Eric Swalwell's family. Stacy Lennox at PJ Media, Eric Swalwell Implicates Democrat Leadership, Blames Trump for Revelation of Chinese Spy Who Infiltrated Him. If Trump was going to do it, he'd have done it before the election.

Maybe the reason one set of politicians was so eager to tar other politicians as Russian lackeys is because they were Chinese running dogs.