Election 2020: Let's Here it for the Supreme Court

Don't let them take it (the election) away!  The faux controversy of the day is the rumor, traced by to lawyer Lin Wood (who attained settlements for the Covington kid from WaPoo, and is involved in the Georgia election controversy) that Chief Justice Roberts was overheard shouting at fellow justices that the precedents of Bush v Gore were should be ignored because of "riots." Sundance at CTH, Texas Congressman Matt Patrick Stunning Claim, Supreme Court Chief Justice Worried About Riots

To be fair – It should be noted the claim comes with no specific citation for further review or analysis; and considering the heightened sense of concern over the election, more details should be requested before making assumptions about the described incident.

AllahPundit at Hot Air, No, John Roberts Didn’t Demand That Texas’s Lawsuit Be Dismissed For Fear Of “Riots.  At Red State, 'streiff' takes on the rumor,  Did Chief Justice John Roberts Really Scream at Conservative Justices Over the Texas Challenge to the 2020 Elections

More importantly, there is a huge factual error in the account related by Mr. Patrick. The Supreme Court justices have not met in person for a conference since March. So there is no closed room from which shouting could be heard. If someone were outside the doors of Roberts or any of the other liberal justices, they could have heard one person screaming. If they were outside the conservatives’ doors, they would not have heard anything unless one or more of those justices had a kick-ass sound system.

I’m afraid that as much as we might like to believe this story, we must, sadly, say that the odds of it being anything other than an allegorical treatment of that conference are just about zero.

But can we really say CJR didn't meet with one or more of the justices? Until then, let's just say "case dismissed for lack of evidence." In more Supreme Court news via sundance, Sidney Powell Reports Supreme Court Rejected Arizona and Wisconsin Cases, Gives Georgia and Michigan Until Jan 14th to Respond. Doing their level best to keep us in suspense, aren't they? However, from Daniel Horowitz at Da Blaze, So much for state election powers: SCOTUS blocks Kansas from requiring proof of citizenship to vote, So they have them when they need to wield them against Trump, but not in this case.  Via the Wombat's In The Mailbox: 12.17.20, the Volokh Conspiracy: Chief Justice Roberts Has Fallen Into A “Truly Bottomless Pit From Which There Is Simply No Extracting [Himself]” 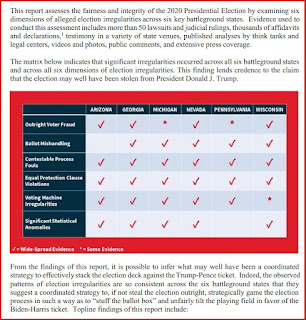 
Also from Nice Deb, ‘Arizona Certified Fraudulent Votes’ Data Scientists Claim and at NR, Andy McCarthy explains why he thinks Biden Won Wisconsin, but It Was Even Closer Than Reported. Because of massive diddling with the absentee voting. I think Trump would have won without it, even given more fraud.

Don Surber claims U.S. intelligence says Trump won by a landslide. Which would explain why the report on foreign election interference is being "delayed". OTH, US intelligence has a dubious record on any number of things.

Via Citizen Free Press, Maria Bartiromo reported, "An intel source told me President Trump did, in fact, win the election. He says that it is up to the Supreme Court to hear suits from other cases across the country to stop the clock. This follows the high court’s refusal to hear the lawsuit from Texas Attorney General Ken Paxton." Fact-check: True.

All it takes is one objection to force a floor vote on whether to accept a state’s electoral votes, remember. If Tuberville is committed to objecting — or if Kelly Loeffler and David Perdue feel obliged to object in order to shore up righty support for their runoff races — then there’s no point in 2024 hopefuls staying on the sidelines. A Ted Cruz or Josh Hawley might be willing to play ball with McConnell and hold their objections in order to spare their colleagues in swing states a tough vote. But once a single objection is registered, thereby forcing that vote, they might as well come off the sidelines and object themselves in order to pander to MAGA voters.

Insty, HAWLEY HAS A KNACK FOR CLARITY: Sen. Josh Hawley (R-MO) succinctly explains why people who worry about voting fraud are not going to shut up any time soon.
TNP, REPORT: Zuckerberg Spent Half A Billion Dollars Coercing States To Adopt Pro-Dem Turnout Measures. Only half a billion?
Sundance, Lt. General Michael Flynn Outlines Some Steps President Trump Could Take Facing Evidence of Election Fraud. Not quite martial law time?
Still more at the Wombat's In The Mailbox: 12.17.20 and at JJ Sefton's The Morning Report - 12/18/20 at Ace's.
Posted by Fritz at 10:29 AM