Well, it seems like it's all coming down to Texas, and the suit it filed against the four "battleground" states where regulators and judges made arbitrary changes in the election procedures not mandated by their legislators, which has now been joined by a number of other states, 17 at this point. The seventeen states include Missouri, Alabama, Arkansas, Florida, Indiana, Kansas, Louisiana, Mississippi, Montana, Nebraska, North Dakota, Oklahoma, South Carolina, South Dakota, Tennessee, Utah, and West Virginia. Fox, Missouri, 16 other states file brief supporting Texas suit to delay presidential elector appointment, Ace, Arizona Joins Texas' Supreme Court Lawsuit, Making It 18 States Now Petitioning to Reject Fraudulent Vote Totals. Sundance at CTH, 17 States File Amicus Brief With Supreme Court in Support of Texas Election Lawsuit

“States have a strong interest in ensuring that the votes of their own citizens are not diluted by the unconstitutional administration of elections in other States. When non-legislative actors in other States encroach on the authority of the “Legislature thereof” in that State to administer a Presidential election, they threaten the liberty, not just of their own citizens, but of every citizen of the United States who casts a lawful ballot in that election — including the citizens of amici States.

Robert Zimmerman (hey, ain't that Bob Dylan?) at Behind the Black, Key legal issues behind the Texas petition to Supreme Court re election issues

The key point however is this:


These injuries, Texas asserts, demand a remedy. But the remedy sought is not what some may surmise is the goal—a second term for President Trump.

No, what Texas seeks is for the Supreme Court to mandate that the defendant states comply with the Constitution, and that means that electors are selected by the states’ legislatures. Texas makes this point clear, stressing: “Plaintiff State does not ask this Court to decide who won the election; they only ask that the Court enjoin the clear violations of the Electors Clause of the Constitution.”

Texas is essentially demanding what I suggested several weeks ago: If election issues are not fixed, elected state Republicans must refuse to certify.

Texas is demanding that these four states put the decision to the legislatures, since their election counts cannot be trusted. While the arguments are sound, it remains to be seen whether the Supreme Court will listen.

And, from PM, Trump campaign joins Texas in voter fraud lawsuit against other states, Tyler O'Neil at PJ Media, 'The Big One': Trump Will Join Texas Lawsuit to Block 'Unlawful Election Results' in Swing States, and Bronson Stocking at Town Hall, Trump Asked This Republican to Argue Election Case Before the Supreme Court (Ted Cruz).

Or as the ever-never Trumper AllahPundit at Hot Air puts it, So SCOTUS Is Going To Be The Scapegoat, Huh? Update: 17 States Join Texas Suit and Trump Joins Doomed Texas Election Lawsuit, Eyeing SCOTUS Ruling; and then there's Patterico, Texas Files Shamefully Meritless Lawsuit to Toss Out Election Results in Four Other States, Plus Bonus Ted Cruz Self-Beclowning 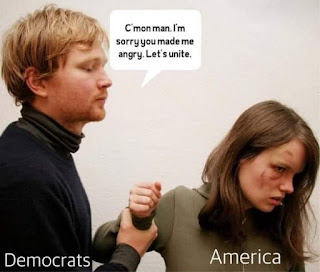 I agree that the suit is unlikely to succeed, but I'm not a lawyer, so it's just a hunch that the Supreme Court will be unwilling to intervene in another election on behalf of a Republican, and will tell the states to mind their own business and elections. But at the very minimum it indicates that a lot of states are  unhappy that their president is being determined by massive fraud (in just a few places, so don't you dare call it "wide-spread"). But Insty posts an interesting thought experiment from a friend:

Thought experiment. There are five Democrat justices on the Supreme Court. There was a Democrat president who just ran for reelection. He supposedly lost, but virtually all Democrat voters believe that massive fraud in several Republican controlled states caused him to lose. Many Democrat attorneys general file a lawsuit in the US Supreme Court, essentially identical to the one that is pending now.

Does anyone believe for a second that those five Democrat justices wouldn’t do absolutely anything necessary to make sure the Democrat control of the presidency was maintained? Democrats care about power. Democrats do not care about process, or rules. Now we are being asked to be so meticulous about adhering to the rules, that we are to allow a laughably egregious fraud to succeed, and to permit our own throats to be cut by turning over the executive branch to the people who just committed the biggest political crime in history. I hope five US supreme court justices will show just a tiny bit of the creativity, to put it politely, which Democrat justices had when they, for example, found an imaginary abortion right in the US Constitution. We’ll see what happens.

But some evidence the court is taking this seriously from sundance, Supreme Court Requests Michigan, Pennsylvania, Wisconsin and Georgia Respond to Election Lawsuit By 3pm Thursday

From atop Da Hill, Pierre Delecto claims It's 'Madness' for Republicans to challenge Electoral College vote, but Stacy McCain advises us on How to Maintain Your Sanity.

However much we might believe that Democrats stole the election, and however much actual evidence we can produce in support of this belief, what are the chances that the Supreme Court will agree with us? Even if I think it’s an ironclad certainty that Democrats cheated (they’re Democrats, and cheating is their historic modus operandi), I am not one of the lawyers working on the cases being sent to the Supreme Court, nor have those lawyers sought my advice. This means that it is beyond my control, and there’s no point getting myself all worked up about it. 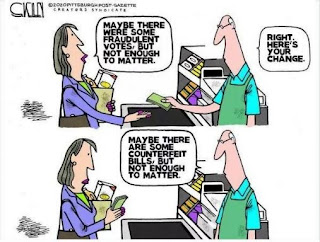 Ace, Statistician: The Likelihood that Biden Could Be So Far Behind at 3am the Morning After the Election and Yet Still Eke Out a Win Is... About One in a Quadrillion (1,000,000,000,000,000) "Google says we aren't allowed to discuss math." It's unlikely but not that unlikely (link to Amazon book, that if you buy it will put a very little money in my pocket). But more seriously, Lt. Col. Shafer at TNP: Here’s The Evidence Of Widespread Election Fraud, and we all know Lt. Cols. (Like Vindman) are fit to rule. Daniel Payne at JTN, Questions persist over early dismissal of Atlanta poll workers, alleged secret ballot counting and at People Who Did Not See Michael Brown Being Killed, Mike Sylvester (a regular Althouse commenter) discourses on How long did the imaginary burst waterpipe delay the ballot-counting?. Back when liberals cared, An HBO Documentary About How Easily an Election Can Be Stolen Was an Emmy Contender in 2014 (IOTW Report). Carrie Sheffield at JTN, Did non-citizen immigrants illegally vote in election? A growing number want to know , Of course they did, the tough question is where it was important enough to make a difference. Meanwhile, from WaEx, Michigan Supreme Court rejects another post-election lawsuit.

In an attempt to prevent having the Laches principle wielded against them again, RNC sues Georgia ahead of Senate runoffs to enforce election laws. Better late than never, but not by much. WaEx reports that Stacey Abrams may hurt Raphael Warnock more than help him in Georgia Senate race.

Mike Brest at WaEx, Nearly two dozen House Republicans urge Trump to demand special counsel investigate 2020 election integrity. Make Biden kill multiple special counsel investigations so it's clear what's at stake. James Fallows at the Atlantic wants Biden to investigate Trump, How Biden Should Investigate Trump, and AllahPundit whines on behalf of New York AG: I Think Trump Will Resign So That Pence Can Pardon Him. I suspect all these actions will be forgotten rather quickly with Trump out of office as they focus on how rapidly they can fuck up the US via other actions.

PM, WATCH: Democrat Rep. Cynthia Jones issues threat to Trump supporters, tells her followers to 'make them pay'. Ace, Michigan Representative Cynthia Johnson, Last Seen Attempting to Intimidate Election Fraud Witnesses, Now Threatens "Trumpers," and Calls Upon Soldiers Who Support Her to "Make Them Pay". I have an idea, let's get Trump supporters to cut off Detroit's food and power until they get rid of her. A down payment, Fox Detroit, Rep. Cynthia Johnson stripped of committees following video threat.

From the Wombat's In The Mailbox: 12.09.20, (in addition to numerous other links), Victory Girls: YouTube Will Ban ANY Video Criticizing Biden Win, Sundance, Google, YouTube, Announce They Will Block Content That Challenges 2020 Election Result, Ace, Monopoly Google's Monopoly Video Platform YouTube Sends Out a Warning to All YouTubers: If You Even Discuss Election Fraud, We Will Ban You From the Platform. Matt Margolis PJ Media, YouTube Says It Will Start Deleting Content Alleging 2020 Election Voter Fraud.  Althouse tries to find the nuance from the NYT: "YouTube to Forbid Videos Claiming Widespread Election Fraud."

Why does reaching the "safe harbor" deadline make any difference? Is there no free-speech interest in talking about something you think is going wrong because it might be too late to do anything?

YouTube’s announcement is a reversal of a much-criticized company policy on election videos. Throughout the election cycle, YouTube, which is owned by Google, has allowed videos spreading false claims of widespread election fraud under a policy that permits videos that comment on the outcome of an election.

That makes it sound as though YouTube wanted to change the policy and is using the "safe harbor" date as an excuse, to make it seem as though they didn't think their policy was wrong or that they wanted to appease critics without needing to say that the critics were right all along.

They're not, however, taking down videos uploaded before the "safe harbor" date, which makes me think the motivation is to appease critics. People can still watch the already-uploaded videos. What's the point of preventing more of the same? All I can think is that there's a concern that as the legal options for challenging the election become closed off, there will be a new and more desperate expressions about what possibly could be done.

Karen Townsend at Hot Air, GOP Members Of Inauguration Committee Refuse To Acknowledge Biden As President-Elect, and the media and Democrats (but I redund) have the sads. At Da Week, Bonnie Kristian whines about Trump's coup d'emotion.

Kerrie Picket at WaEx, Republicans gird for House fight on contested Iowa race. Right now it's down to 6 votes, and the Republican is ahead, and the Democrat want the House to refuse to seat her. Why not? They got away with it once before.