On the Fifth Day of Christmas Election 2020 Gave to Me

The latest scheme? Via Wombat's, In The Mailbox: 12.28.20,Ted Noel at Am Think thinks It’s For Mike Pence To Judge Whether A Legitimate Presidential Election Was Held At All,  AllahPundit whines Louie Gohmert, Kelli Ward, Others Try To Overturn Election By Suing … Mike Pence?   From Tyler O'Neil at PJ Media, Louie Gohmert Lawsuit Seeks to Give Mike Pence Power to Overturn Electoral College Vote

The lawsuit seeks to empower Pence to effectively overturn the election results by selecting alternate slates of electors and counting their votes instead of the votes cast by the state’s official electors based on the states’ certified election results.

Sundance at CTH The Guarantee Clause, The Electoral Count Act of 1887, The DNI Ratcliffe Report on Foreign Interference and VP Mike Pence

If DNI Ratcliffe produces a report (prior to January 6th) that outlines foreign interference in the election; and if the argument can be made the states with the contested (dual sets) of electors were subjects/targets of that interference; then a foundation to nullify the electors from the contested states is laid in congress.

In this approach the electoral nullification argument would appear to rest on The Guarantee Clause; where the state election outcome was not valid – as it is not representative of a republican form of government, and the majority vote requirement was manipulated.

From the never-Trumper Jerry Lambe at Law and Crime, Mike Pence Cannot Block the Certification of Joe Biden’s Victory When the Senate Formally Counts Electoral College Votes on Jan. 6th. You never know until you try, do you? Capt. Ed at Hot Air, NY Post To Trump: “Stop The Insanity” — It’s Over  "Pretty strong stuff, especially coming from the editorial board that went to war with Big Tech over its reporting on Hunter Biden." Mediaite, Rep. Mo Brooks Responds to Fellow Republican Adam Kinzinger Blasting GOP Election Fraud ‘Grifters’. Donald Devine at Am Spec, Stop Calling Trump’s Election Challenge Supporters Hypocrites. Also from  Wombat's In The Mailbox: 12.28.20,  , Brian Joondeph, Is Nothing Happening? Or is Trump is Channeling Sun Tzu? Vox Popoli: Why I Am Confident. I'm not. Also, The Geller Report: Sidney Powell Releases Massive 270-Page Document Detailing Alleged Election Fraud Volokh Conspiracy: Trump Campaign Loses Another Court Appeal and Shot In The Dark: Un-Krakened. 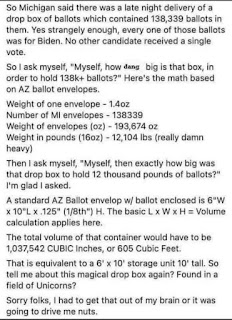 According to Ryan, the analysis compared official county election results to the total number of voters who voted Nov. 3, as recorded by the Department of State.

Ryan says they found that 6,962,607 total ballots were reported as being cast, while DoS/SURE system records indicated that only 6,760,230 total voters actually voted.

Among the 6,962,607 total ballots cast, 6,931,060 total votes were counted in the presidential race, including all three candidates on the ballot and write-in candidates, according to Ryan.

He says the difference of 202,377 more votes cast than voters voting, together with the 31,547 over- and under-votes in the presidential race, adds up to a discrepancy of 170,830 votes, which is more than twice the reported statewide difference between Donald Trump and Joe Biden.

That’s nice, but what is the state legislature going to do about it? It is their responsibility, and just whining about voter fraud allegations accomplishes nothing. They need to actually vote to decertify the election if they are convinced it “was absolutely premature, unconfirmed, and in error.”

The problem of course is their Republican leadership, which doesn’t want to do that, because it might hurt the feelings of the Democrats. God forbid! It is all right to disenfranchise millions of Republicans and allow for election fraud, but allowing Democrat feelings to be bruised cannot stand!

Doug Herz at Am Think, How Democrats are sneakily destroying the Electoral College

Add the Electoral College to the list of American institutions that the Democrats have destroyed (along with education, media, entertainment, Silicon Valley, sports, big cities, the justice system, the family, the FBI-CIA, the Supreme Court, etc.). By manufacturing massive fraudulent vote counts in the big cities they control, Democrats invalidate suburban and rural votes in key battleground states like Georgia, Pennsylvania, Michigan, Wisconsin, Nevada, and Arizona. Elections simply become who can produce the most votes, which is most easily accomplished in large Democrat-run cities like Atlanta, Philadelphia, Detroit, and Milwaukee. The Democrat machines that control those cities can effortlessly run up large vote counts for Democrats without fear of being found out by manipulating the voting rules and by manufacturing ballots. Local Democrat judges "on the payroll" look the other way, while Big Media leads in the cover-up with information blackouts. Large Democrat donors, Silicon Valley bigwigs, and geopolitical rivals like China bankroll the operation. By relying on big city votes to swing the national elections, our electoral system degenerates into a de facto direct voting structure, thus invalidating the Electoral College and violating the Constitution.

PM,  Failed Georgia gubernatorial candidate Stacey Abrams says 'Republicans do not know how to win without voter suppression' Democrats always telegraph what they are doing by accusing you of it.

Matt Margolis at PJ Media hopes Here's How a Republican Could End up Speaker of the House Instead of Nancy Pelosi If pigs could fly.

While House members can vote by proxy due to emergency rules adopted in May to protect members from getting and spreading COVID-19, but, as The Hill reports, “the proxy-voting rule expires with the new Congress, requiring lawmakers to be in the Capitol in person if they want to participate in the Jan. 3 floor vote for Speaker.”

New rules governing the 117th Congress happen after the vote for speaker.

House Democrats have been taking advantage of this proxy-voting rule in significant numbers. On December 18, nearly 90 Democrats voted by proxy.

This means that candidates for speaker of the House must receive a majority of the votes cast in person to be elected speaker. Democrats already have a thin majority of 222 seats following the 2020 election, and three moderate Democrats say they don’t intend to vote for Pelosi when the vote takes place on January 3. In addition, several Democrats have health conditions that have kept them from the Capitol in 2020. It would only take a small number of Democrats being exposed to COVID-19 prior to the vote for Pelosi to potentially be in trouble.

President Trump tweets his support for American voters to travel to Washington DC to have their voices heard on January 6th, the same date the Senate is scheduled to certify the results of a fraudulent election result. [Unofficial Information – Not From POTUS]

But from Carol Brown at Am Think, Will Washington, DC lock out Trump supporters on January 6th? They might try.