SERC researchers have spent the year tagging and tracking nearly two dozen dusky sharks as part of the Smithsonian’s Movement of Life Initiative. They’re finding that a protected zone, put in place after overfishing caused a population plunge in the 1980s and 1990s, has been working. 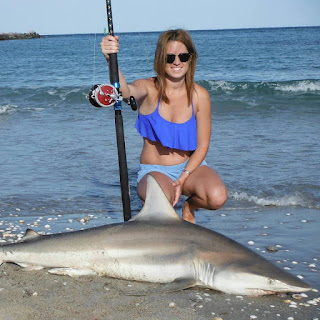 The dusky shark is a predator that grows up to 14 feet long and 765 pounds. Lead researcher Chuck Bangley calls duskies “the archetypal big, gray shark.” As a species, it’s especially susceptible to threats like overfishing because dusky sharks take 16 to 29 years to mature. If their populations take a hit, recovery can take decades.

They got into trouble in the 80s and 90s because fishery managers offered sharks as an alternative fishery while other fish stocks were collapsing. During that time, some 65 to 90 percent of duskies were wiped out, and dusky shark fishing was banned in 2000. 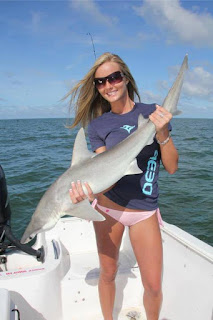 The Mid-Atlantic Shark Closed Area, which covers most of the North Carolina Coast, bans bottom longline fishing, which can accidentally hook dusky sharks, for seven months a year.

In the new study, the former Smithsonian postdoc Bangley and his team of scientists tagged 23 dusky sharks with special acoustic telemetry tags, as the SERC Shorelines blog reports. The tags emit pings that hundreds of receivers along the East Coast can pick up whenever a shark passes nearby, enabling scientists to see where sharks are migrating and when.

SERC scientists tell Bay Bulletin the tagging process is quick and virtually painless for the shark, but catching it takes some doing. After the shark is caught, scientists flip the shark on its back, and a hose keeps seawater flowing over its gills while scientists insert the tag into its belly. The process takes just five to 10 minutes.

Having plenty of receivers to pick up the tags’ signals along the coast is a key factor to track the sharks. The Atlantic Cooperative Telemetry Network is a grassroots effort of nearly 200 scientists putting receivers all along the East Coast and sharing their data.

“The dusky shark project is a great example of how valuable having a regional network is for tracking migratory species,” said co-author Matt Ogburn, head of SERC’s Fisheries Conservation Lab.

Using the network of pinging tags, researchers found dusky sharks use the protected Mid-Atlantic Shark Closed Area, but migrating sharks used it during different months than they expected. Bangley suspects the warmer waters of climate change may be the reason duskies traveled the area from November through May, rather than January through July, when bottom longline fishing is banned. 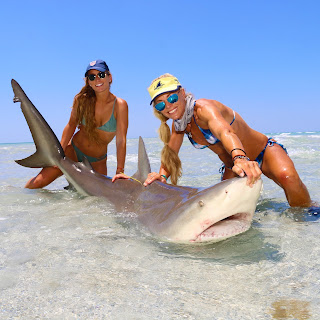 Or they just had it wrong to start with. Ocean temperatures have warmed a truly trivial amount.

The discovery suggests the timing of the Closed Area may need to change to better protect dusky sharks. However, the number traveling the area is encouraging.

“This is a species that we were afraid was going to be impossible to bring back,” Bangley tells the SERC Shorelines blog. “And it’s actually coming back to the point where now we’re having to think about things like, all right, now how do we manage interactions between these species and people? It’s a good problem to have.”

Unless you're the person being bitten.