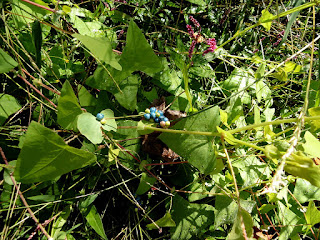 Georgia, Skye and I walked to the beach today, and along the way we spotted this in the roadside:  Mile-a-Minute:

Persicaria perfoliata is a species of flowering plant in the buckwheat family. Common names include mile-a-minute, devil's tail, giant climbing tearthumb, and Asiatic tearthumb. It is a trailing herbaceous annual vine with barbed stems and triangular leaves. It is native to most of temperate and tropical eastern Asia, occurring from eastern Russia and Japan in the north, and the range extending to the Philippines and India in the south. P. perfoliata is an aggressive, highly invasive weed. 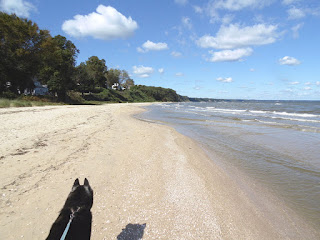 Persicaria perfoliata has a reddish stem that is armed with downward pointing hooks or barbs which are also present on the underside of the leaf blades. The light green leaves are shaped like an equilateral (equal-sided) triangle and alternate along the narrow, delicate stems. Distinctive circular, cup-shaped leafy structures, called ocreass, surround the stem at intervals. Flower buds, and later flowers and fruits, emerge from within the ocreas. Flowers are small, white and generally inconspicuous. The edible fruits are attractive, metallic blue and segmented, each segment containing a single glossy, black or reddish-black seed. 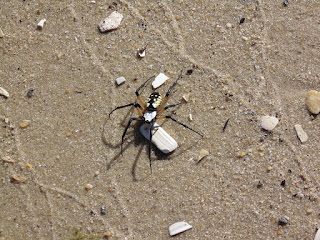 Persicaria perfoliata is an edible species. Its tender leaves and shoots can be eaten raw or cooked as a salad green or vegetable and its fruit is sweet and can be eaten fresh.

This Yellow Garden Spider, aka Orb Weaver, was out of it's element on the beach. 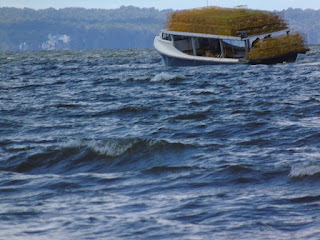 A rougher day than this one.
Posted by Fritz at 6:39 PM