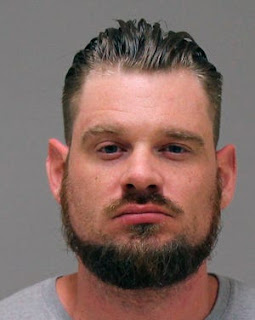 Say hello to Adam Fox, who was busted by the feds as part of a terrorist conspiracy. Is that the face of an intelligent constitutional scholar? Does this man look like an argument for racial superiority? The dude was homeless, living in the basement of a vacuum cleaner shop.

Terrorism is bad. How many different ways do I need to say this? It’s like telling kids, “Hey, stay away from heroin. It’s addictive.” But the members of the Idiot Caucus never seem to learn:


Agents foiled a stunning plot to kidnap Michigan Democratic Gov. Gretchen Whitmer, authorities said Thursday in announcing charges in an alleged scheme that involved months of planning and even rehearsals to snatch Whitmer at her vacation home.
Six men were charged in federal court, while seven others accused of trying to target police and the state Capitol were charged in state court.
“All of us in Michigan can disagree about politics, but those disagreements should never, ever amount to violence. Violence has been prevented today,” Detroit U.S. Attorney Matthew Schneider told reporters.
The six men charged in federal court plotted for months, consulting and training with members of a group that federal authorities described as a militia, and undertaking rehearsals in August and September, according to an FBI affidavit.
Four planned to meet Wednesday to “make a payment on explosives and exchange tactical gear,” the FBI said in the court filing.
The FBI quoted one of the accused as saying Whitmer “has no checks and balances at all. She has uncontrolled power right now. All good things must come to an end.”
. . .
The criminal complaint identified the six as Adam Fox, Ty Garbin, Kaleb Franks, Daniel Harris, Brandon Caserta, all of Michigan, and Barry Croft of Delaware.
Fox said he needed 200 men to storm the Capitol building in Lansing and take hostages, including the governor, according to the FBI. He said he wanted to try Whitmer for “treason” and would execute the plan before the Nov. 3 election, the government said. The group later shifted to targeting the governor’s vacation home, the FBI said.
The government said the scheme appeared to have roots in a June gathering in Dublin, Ohio, attended by more than a dozen people from several states, including Croft and Fox.
“The group talked about creating a society that followed the U.S. Bill of Rights and where they could be self-sufficient,” the FBI affidavit said. “They discussed different ways of achieving this goal from peaceful endeavors to violent actions. … Several members talked about murdering ‘tyrants’ or ‘taking’ a sitting governor.”

In case any idiots are reading this — taking a break from your “dark web” fantasies of revolution, perhaps — let me explain something that you don’t seem to understand: Not everyone who says he’s your friend is your friend. Guarantee you that this little “cell” was penetrated by undercover FBI men, or else that one of their buddies got busted and became an informant. There is no such thing as a terrorist conspiracy that is not subject to infiltration, especially “right-wing extremists” like this Michigan crew. For decades, the FBI has developed tactics to deal with this kind of threat, so that whenever you see such a “right-wing” attack actually happen, it’s almost always a “lone wolf.”

Any attempt to organize a violent right-wing group larger than two or three people will almost certainly be detected by federal agents. Alas, there is never any shortage of idiots in the world.

The WaPoo made sure to highlite the "right wing militia, boogaloo boys" connection in today's paper,  Michigan kidnapping plot, like so many other extremist crimes, foreshadowed on social media

There’s a YouTube video of one suspect, Brandon Caserta, pretending to fire a weapon while wearing a sleeveless shirt that used an obscenity to describe what he’d like to do to “THE GOVERNMENT.” Visible in the closet behind him are Hawaiian shirts — common symbols of the violently anti-government Boogaloo movement. In a TikTok video, Caserta is shown wearing such a shirt.

There’s the Twitter account that apparently belongs to another suspect, Barry Croft, ranting about immigrants, praising President Trump and calling for the prosecution of Trump’s onetime Democratic rival, Hillary Clinton. One image featured by the account shows a young man draped in ammunition and cradling a rifle in his hands. Croft also appears to have an account on a small social media site devoted to spreading QAnon, the right-wing conspiracy theory.

And then there was a Facebook page called “Michigan Militia Corps, Wolverines” that, until it was taken down in recent weeks, enlisted similar rhetoric as the group behind the plot, which authorities identified as “Wolverine Watchmen.” In a May post linking to an article headlined, “Trump sides with protesters against Michigan governor,” there is an accompanying image of men holding massive firearms.

Of course, what they are much more reluctant to show:

This is a video of Brandon Caserta, one of the ringleaders of the group of men arrested for a plot where the group planned to kidnap Governor Gretchen Whitmer. Caserta has an anarchist flag behind him and in YouTube videos trashes police. He’s not a Republican, he’s an anarchist. pic.twitter.com/J1vE2qGYL7

He looks and sounds like he would fit in well on the streets of Portland. Expecting coherent political discourse from such losers is unwarranted.
I would also guess that there is about a 50% chance that if and when these charges come to trial, it will turn out that it was an FBI mole who suggested any actual actions the group took towards this plot. They have a long history. I also suspect the timing behind this was generated as an October surprise by deep staters remaining in the FBI. They've apparently had the group in their sights for some time.
UPDATE: Stacy sees the info on Caserta, VIDEO: Cop-Hating Anarchist in Michigan Calls Trump a ‘Tyrant’

His Instagram handle was @xenoccult and he probably identifies as Pagan. Bet you money he has, or once had, a reptile collection — boa constrictor and/or iguana — and likes to smoke weed. His hobbies, other than anarchism and guns, include comic books and sci-fi/fantasy movies.

What I’m saying is, Brandon Caserta is a definite type.

If you know many working-class white Millenials, you are familiar with the Brandon Caserta type, the autodidact Philosopher King, who got his education from paperback books, YouTube and Reddit. They’re a dime a dozen, this type, but few of them ever escalate to violence.

Notice that nobody in the mainstream Right is defending these guys. There is no right-wing equivalent of BLM to organize hashtag campaigns or street protests when white criminals get busted. Republicans aren’t toppling statues or torching police cars over Brandon Caserta’s arrest.

The Left will turn violent terrorists like Angela Davis into cult heroes, but the Right is about law and order, peace and prosperity.