WuFlu for You - Part I - State of the Pandemic

Time for one of those catch up posts on the state  of the WuFlu pandemic. The digital fridge is bursting, and some of the items therein are covered with mold so it's time to clean again. First up, the status of the pandemic:

The WaPoo whines Pandemic seems to be leveling off in U.S., but numbers remain troublingly high, experts say. This article was published literally a month ago, but I'm sure their title is still accurate from their perspective. As long as Trump is in office, one case is too many, unless it's his. But yes, it's still ongoing, and likely increasing again:

Deaths however, are still declining slightly.

Of most concern, cases are rising in several regions that were lightly hit in the early phases of the pandemic (cases per 100,000 residents), 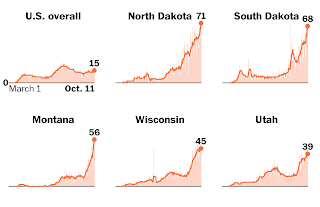 However, the pandemic has yet to reach Tangier Island, Virginia. I wonder why (no I don't really). Bloomberg, Europe Virus Stars Scramble After Declaring Victory Too Fast,  Ace, America Sees Covid Cases (and Deaths) Falling While Europe, Which Supposedly Contained the Outbreak Better Than The Bad Orange Man, Sees New Outbreaks "Remember when the Traitor Media was forever comparing US infection rates to Europe's? . . .For some inexplicable reason, they're not doing that any more." I&I, Is The Coronavirus Crisis Finally Over? A Nobel Laureate Says It Might Be. Nobel laureates are wrong about as often as most scientists. However, deaths are starting to fall below the normally expected curves, suggesting that most of the "dry tinder" may have been burned.

US is experiencing a "COVID Catch Up".

With COVID the US is catching up to forecasted deaths.

Healthcare can delay death, but can never stop it. pic.twitter.com/QdYEmsfKcC

From the Atlantic, There Won’t Be a Clear End to the Pandemic "The collective sense of closure we’re all longing for may never arrive. Instead, brace for a slow fade into a new normal." That's about right, but the media will stop hyping every death if Joe Biden is elected. But Business Watch warns  The COVID-19 pandemic is about to enter its most treacherous phase "Washington won’t be there to support the economy this time, as infections inevitably rise as people head back indoors", while at Hot Air, AllahPundit asks hopefully, Has The Third Wave Of COVID Begun? and from WaEx, Epidemiologists uncertain whether long-feared autumn second wave of COVID-19 will materialize

Study Finds, Coronavirus weakening? Viral loads carried by patients on the decline, along with death rate. Younger patients more resistant is my take. James D. Agresti at Is the Official Covid-19 Death Toll Accurate?. Depends on what you mean by accurate. I would argue that data is strongly biased upwards, since hospitals are strongly incentivized to blame deaths on WuFlu. Blueberry Town, Covid-19 case mortality data from ICE facilities and the knuckleheads thing. Many cases, few deaths. UPI, COVID-19 prevention may lead to record low flu rates, CDC says. Well, if we all stay in hiding. BTW, I got my flu shot a couple of days ago. A sore arm for a couple of days.
A personal note, San Andreas nursing home death toll rises; employees cite negligence in handling of COVID-19 outbreak. This was the facility my dad spent most of his final year in. I say without fear of contradiction that it was full of "dry tinder". WuFlu might have been a blessing to Dad.
The Sweden story.  Jazz Shaw at Hot Air, It’s Looking Like Sweden’s Herd Immunity Strategy Worked. But according to Reuters, Sweden's daily COVID-19 cases hit highest level since June. WaEx, Sweden shows lockdowns were unnecessary. No wonder public health officials hate it. NYT, Vilified Early Over Lax Virus Strategy, Sweden Seems to Have Scourge Controlled "After having weathered high death rates when it resisted a lockdown in the spring, Sweden now has one of Europe’s lowest rates of daily new cases. Whether that is an aberration remains to be seen." FFE has 5 Charts That Show Sweden’s Strategy Worked. The Lockdowns Failed
WaPoo whines Fewer than 1 in 10 Americans show signs of past coronavirus infection, large national study finds "This suggests millions may still be vulnerable to infection, authors say" But they don't subscribe to the as yet unproven theory that 30-50 of the population is functionally immune for some reason or another.
MedicalXpress, Strong activation of anti-bacterial T cells linked to severe COVID-19
Judith Curry, at Climate Etc, What the pandemic has taught us about science

Bad practice can corrupt all stages of the process. Some scientists fall so in love with their guesses that they fail to test them against evidence. They just compute the consequences and stop there. Mathematical models are elaborate, formal guesses, and there has been a disturbing tendency in recent years to describe their output with words like data, result or outcome. They are nothing of the sort.

An epidemiological model developed last March at Imperial College London was treated by politicians as hard evidence that without lockdowns, the pandemic could kill 2.2 million Americans, 510,000 Britons and 96,000 Swedes. The Swedes tested the model against the real world and found it wanting: They decided to forgo a lockdown, and fewer than 6,000 have died there.

In general, science is much better at telling you about the past and the present than the future. As Philip Tetlock of the University of Pennsylvania and others have shown, forecasting economic, meteorological or epidemiological events more than a short time ahead continues to prove frustratingly hard, and experts are sometimes worse at it than amateurs, because they overemphasize their pet causal theories.

Bookworm, Is this idea about the origin of the Wuhan virus too off the wall? "Could China have created the Wuhan virus to provide a little extra breathing room in its socialized medicine and welfare systems?" China is an asshole. Adjust your expectations accordingly. But really, I doubt they have the skill for a designer virus.