Reason #97 Trump Should be Reelected


A usual rate of growth for a good quarter (annualized) of growth is 3%.

The US economy grew by 33.1% in the third quarter.

U.S. GDP accelerated at a 33.1% annualized pace in the third quarter, the Commerce Department reported.

That was better than the 32% estimate from a Dow Jones economist survey.

A surge in business and residential investment along with stronger consumer activity helped the economy after its worst-ever quarter in Q2.
...
The gain came after a 31.4% plunge in the second quarter and was better than the 32% estimate from economists surveyed by Dow Jones. The previous post-World War II record was the 16.7% burst in the first quarter of 1950.

Meanwhile, Democrats, and NeverTrump Traitors, are pushing Lockdowns Forever for a respiratory illness which, while bad, is only twice as deadly as the flu we get literally every fucking year.

Earlier in the campaign slow Joe was talking about a K shaped recovery, without understanding what he was saying. I think he was trying to say the rich get richer, the poor get poorer, which is stupid.

Well, the "K" means that the rich get richer and everyone else flatlines. Think of the K tipped over on to its back.

but what IS happening could be described as a K shaped recovery as applied to different regions. Leftist shitholes are headed even further down - states that are opening up and allowing growth are not only getting their own natural growth, but also the growth from all of the business in the shithole states that is moving.

Also: the shitholes' primary industries seem to be arson and looting.

And you just can't build a future on that.

Unbelievable: So, as I mentioned above, the 33.1% growth rate is annulalized. That means, the single quarter of growth is multiplied by four to tell you how much we grew if this same rate of growth continued for a year.

This is literally how GDP is always reported -- taking the one quarter rate and multiplying by four to get an annualized figure.

When you read that a quarter's growth rate was 3.2%, that's the annualized figure. The actual number for the growth in just this quarter would be 0.8%.

But this is how it has always been reported.

Except now. Now the Washington Posts decides to, for the first time in history, report the GDP growth rate on a non-annualized basis, to make it look smaller.

However: The 31.4% contraction we saw in the second quarter was also annualized, or multiplied by four. The actual rate of contraction was around 7.5%.

So: Does the Washington Post reduce the second quarter's contraction in a consistent way, to compare apples with apples?

Answer: No, of course not. They claim that the growth this quarter was 7.4%, which of course barely compares to the second quarter's 31.4% contraction.

So it's either dishonesty or innumeracy. But then, it is the WaPoo, and reporters, so both is a reasonable choice too. 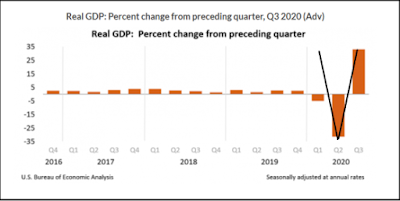 So, this also means the WuFlu recession is over, a recession being defined as a negative GDP growth for two or more consecutive quarters.