Declassification is the heart of a great percentage of the stories today. Chuck Ross at Da Caller is still looking at how CIA Documents Stir Debate Over Alleged Clinton Plan To Link Trump To Russia. Gateway Pundit notes that President Trump Authorizes Total Declassification of All Documents Related to Spygate, Hillary Email Scandal – WITH NO REDACTIONS. We'll see. But the President doesn't have much left to lose. Sharyl Attkisson from JTN reports FBI, CIA continue to stonewall on Russia probe, key Senate chairmen say. Chuck Ross, Senators Say CIA Director Is Withholding Trump-Russia Intel  Of course they are. Trump will have to send armed marshals into the Hoover building and Langley to get the goods. I'd support it.

I've been pushing FBI for transparency on Russiagate for yrs We now kno CIA was part of info gathering but CIA won't even talk to me on phone AMERICANS DESERVE ANSWERS!! Yesterday Senator Johnson & I renewed call for CIA docs Transpency brings accountability 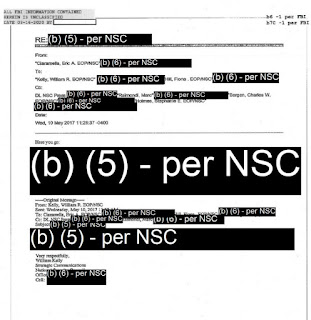 John Solomon, JTN, What Russia declassification looks like when bureaucrats get involved: a big black blob. At least we know the people involved. John also has a (long) list  of the The 40 key Russia documents President Trump must still declassify

From the 1920s to 1984, the Russians ran candidates in U.S. elections. In 1976, their candidate for president was Gus Hall, a dutiful Stalinist, and a college student named John Brennan voted for him. In a free country like the USA, that was Brennan’s right, but there is no right to a job with the CIA. Anybody who voted for the candidate of the Communist Party USA, founded and maintained by Soviet Russia, should not even get in the door. Brennan not only got hired but in 2013 came to run the place. 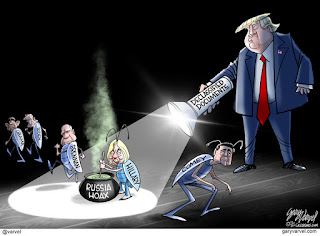 Also, it appears that John Durham has opened an investigation of a new old aspect of Russiagate. Remember the charges that Trump and Russia was swapping information via computer through Alfa Bank, which IG Horowitz debunked as being spam being sent between two computers. Ace, Report: Durham Using Grand Jury to Investigate Origins of Contrived Alfa Bank Conspiracy Theory


This was the conspiracy theory that a computer at Trump Tower was sending secret messages to Moscow.

It was completely fake. As usual.

The U.S. attorney investigating the origins of the Trump-Russia probe is seeking grand jury testimony from a group of computer scientists behind a since-debunked allegation that Donald Trump’s real estate company had covert computer contacts with a Russian bank, according to a report.

The New Yorker reports that John Durham, the U.S. attorney for Connecticut, has contacted the scientists in recent weeks seeking their testimony.

According to the magazine, investigators have told potential witnesses they are investigating whether two pseudonymous computer experts gave false information to the U.S. government regarding a covert communications channel between the Russian bank, Alfa Bank, and the Trump Organization.

Hillary Clinton emphasized the allegation of a possible link between Trump and Alfa Bank when it appeared in the press days before the 2016 election.

A very important article was written yesterday in the New Yorker [SEE HERE]. While the topic of the article spotlights the ridiculous conspiracy theory surrounding Alfa bank, and the insufferable nonsense about Trump Tower servers having contact -electronic touch signals- with servers from the Russian banking organization, there are aspects to the story that show where the Durham probe has been forced to travel.

Within the article –which everyone should read– some names are very important. The article is framed around defending the New Yorker’s previous reporting on the Alfa Bank conspiracy theory, so the intent of the article is defensive. However, the events being described in the article, and more importantly the people being outlined in the article, are accurate. Especially Daniel Jones and his lawyer William Taylor; and the connection of both to Fusion GPS and Glenn Simpson.

According to the article there are two parallel efforts underway to untangle the background of how the false Alfa Bank story was originated. One effort is a set of civil lawsuits by the owners of Alfa bank against those who created the fraudulent story that flowed through Fusion GPS, into Chris Steele’s dossier, into the FBI, and ultimately into the Buzzfeed reporting therein. The owners of the bank are taking all of these entities into court and demanding discovery of sources who framed/created the false impression.

The second outlined effort is a set of subpoenas for some of the same names to appear before a grand jury being run by the John Durham probe. The witnesses are lawyered-up and attempting to avoid the grand jury subpoenas.

Part of the New Yorker story is constructed around wondering if the Alfa Bank team is working with the Durham team. That is a false narrative created for political deflection only. However, the article outlines factual evidence of the Durham grand jury; and by knowing what issues are being explored we can see -in advance- where this trail is going.

I think this also gives Durham the opportunity to go after some people who aren't protected by the various arms of the deep state.

At Bloomberg, via the Bozeman Chronic, Chris Strohm whines that Trump presses Barr to target political enemies while Justice Department stays mute. Get back to me after we get to the bottom of Russiagate.

In the new motion, the defense lawyers argued that Sullivan met the standard for dismissal or recusal because he created the appearance of bias "when he actively litigated against General Flynn" in the appeals court.

"He has since far exceeded it – rising to the level of demonstrating actual bias," the lawyers wrote, citing Sullivan's comments during last week's hearing. "The court’s contempt and disdain for the defense was palpable throughout the hearing on September 29, 2020, including when defense counsel made an oral motion for his immediate disqualification, which he refused to allow even to be fully stated for the record."

Tristan Justice at Da Fed,  FBI Is Stonewalling Congressional Oversight On Hunter Biden. Of course they are. From the Wombat's In The Mailbox: 10.08.20,The Geller Report reports Joe Biden is The Subject Of Federal Criminal Investigations Into His Role In Spygate And Activities In Ukraine,


BREAKING: Joe Biden is the subject of an active federal criminal investigation into his role in the counterintelligence investigation directed @ the Trump campaign during the 2016 election, incl the former vice president's activities in Ukraine.Ukrainian witnesses are cooperating

If so, the FBI's reticence is warranted, not that it would stop them from leaking against Trump.
Linked at Pirate's Cove in the weekly Sorta Blogless Sunday Pinup and linkfest.
Posted by Fritz at 10:00 AM