Well, we're back at home, although Skye is still at the dog spa, awaiting her semiannual bath and professional grooming. I don't really have a full load of either Russiagate or Biden Crime Family links.

There is at least one "Russiagate" type story that needs retelling. Judge Sullivan has found a new dodge to avoid letting General Flynn off the hook, while waiting for his Democrat allies to hopefully take power and force Trump to pardon him in the interim. Fox, Flynn case judge issues unusual order telling government to certify evidence is ‘true and correct’

In an unusual order posted Friday, the federal judge in the case of former Trump national security adviser Michael Flynn told the Justice Department to file a declaration -- under penalty of perjury -- by Monday that evidence in the case is “true and correct.”

“The government has acknowledged that altered FBI records have been produced by the government and filed on the record in this case,” noted Judge Emmet Sullivan

The order from Sullivan comes as the government again requested the judge dismiss the criminal case against Flynn, a move Sullivan has so far resisted.

And about those alterations? Via da  Hill, Judge orders DOJ to attest to Flynn evidence after former FBI agent accuses prosecutors of altering documents

"In response to the Court and counsel’s questions, the government has learned that, during the review of the Strzok notes, FBI agents assigned to the EDMO review placed a single yellow sticky note on each page of the Strzok notes with estimated dates (the notes themselves are undated)," Jocelyn Ballantine, a DOJ attorney, wrote in a court filing.

"Those two sticky notes were inadvertently not removed when the notes were scanned by FBI Headquarters, before they were forwarded to our office for production," Ballantine added. "The government has also confirmed with Mr. Goelman and can represent that the content of the notes was not otherwise altered."

Seems like a stupid, albeit innocent error, quite unlike Kevin Clinesmith altering an email to the FISA court, changing it to say that Carter Page was not a CIA informant, when the original said he was. I would think that all DOJ filings have the presumption that the prosecutors aren't inventing facts, although we can be sure that they always shade things to their preferred outcomes. That's kind of the definition of a lawyer. 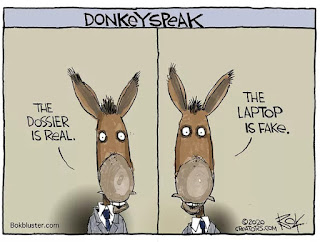 On Thursday, the Justice Department also signaled in a public filing that it had completed its review of the Flynn case and had no additional documents to turn over. DOJ specifically pointed out that it found no evidence of an earlier draft of the FBI's summary of Flynn's Jan. 24, 2017 interview with Strzok and agent Joe Pientka. Flynn's legal team, as well as outside allies including Trump himself, have suggested for more than a year that an "original" summary — known in FBI parlance as an FD-302 — of the interview exists and must be turned over, but DOJ said it scoured all FBI systems and had already turned over three drafts as well as the first finalized version, completed on Feb. 15, 2017.

"The department also indicated it found no additional relevant communications about Flynn's case among FBI higher-ups that hadn't already been disclosed.

There must have been something pretty damning to the FBI in that original 302 to make it worth such a thorough deletion from a data base designed to  retain all records indefinitely.

Meanwhile, the GSA—the executive agency responsible for providing services to the transition teams of both Democratic and Republican candidates—refused to provide Trump’s transition team copies of its own records, according to the report (pdf).

GSA officials proactively contacted the FBI to ask if they should preserve Trump transition team records on Feb. 15, 2017, after Michael Flynn resigned as Trump’s national security adviser, the majority staff report released on Oct. 23 by the Senate’s Committee on Homeland Security and Governmental Affairs and its Finance Committee shows. The agency then decided to preserve all of the Trump transition team’s records after the FBI requested it to preserve records associated with Flynn.

The GSA officials’ offer to the FBI to preserve the Trump transition team’s records came after the removal process of the records had begun on Jan. 26, 2017, according to the terms of the memorandum.

The removal process was stopped afterward.

The GSA took the unsolicited action despite not receiving a formal preservation request until June 12, 2017.

The GSA decided to not tell the White House or counsel for the Trump transition team about the preservation. The agency also refused to honor the team’s request to access those records when requested.

Now this is interesting:

Mueller got the records via two letterhead memoranda from FBI assistant general counsel Kevin Clinesmith, who pleaded guilty in August to altering an email as part of the process to obtain a secret court warrant to spy on a former Trump campaign adviser. The Mueller team didn’t issue a subpoena or search warrant and the GSA didn’t afford the transition team an opportunity to review those records.

The report doesn’t mention which GSA officials contacted the FBI on their own initiative to give the transition records after Flynn’s resignation.

We should be extra wary any time Kevin Clinesmith is involved.

And from John Solomon at JTN, Memo suggests FBI opened Manafort probe before Trump hired lobbyist but gave no warning

A recently declassified government document suggests the FBI opened its most recent investigation of Paul Manafort in January 2016, two months before President Trump hired the lobbyist as a senior official in his campaign. The revelation is prompting new questions about why the bureau did not provide the GOP candidate with a defensive briefing.

The information about the start of the Manafort probe was contained in footnote 332 of a spreadsheet that FBI analysts constructed analyzing the lack of corroboration for Christopher Steele's now infamous dossier alleging Trump and Russia colluded to hijack the 2016 election, an allegation that has since been disproven.

The spreadsheet was declassified earlier this month, revealing the FBI found little to no corroboration for Steele's allegations against Trump but nonetheless used the dossier to support a FISA surveillance warrant to spy on the Trump campaign through adviser Carter Page.

The information in the footnote and spreadsheet states an "opening EC" or electronic communication was generated in the Manafort probe on Jan. 13, 2016, and by August 2016 "Manafort is an active subject of a money laundering and tax evasion criminal case out of Washington Field Office."
. . .
The timing suggested in the spreadsheet is consistent with an account from Ukrainian prosecutors, who revealed last year they were summoned on short notice to Washington by the Obama White House for a series of meetings in January 2016 during which Justice Department officials pressed them to find evidence against Manafort and his work for the Ukrainian Party of Regions. The prosecutors also stated the Obama DOJ officials asked the Ukrainians to drop their investigation of the Hunter Biden-related Burisma Holdings gas company and let the FBI take it over.

So, yeah, the Obama administration was up to its neck in this, protecting the Bidens and trying to find something on any Trump associate they could, and rather than notify Trump, they decided to withhold the information, and go straight to prosecution.