and a bit of Russigate, with some more on "Anonymous" Miles Taylor.  Post Millennial, Donald Trump Jr. correctly predicted NYT's 'Anonymous' author was 'very low-level person' and Donald Trump SLAMS 'Anonymous' writer Miles Taylor: 'He should be prosecuted', and before you think, oh he's just being a blowhard, yes, Miles Taylor should be prosecuted for theft of services. He was paid to work for the President, not against him. And what a nice precedent it would be. Stacy McCain explains why ‘Anonymous’ Miles Taylor Represents Everything American Hate About the GOP:

Miles Taylor is selfish, greedy and dishonest. Hired as a political appointee to a staff position at the Department of Homeland Security, he immediately began working to sabotage the administration that had appointed him, writing an anonymous September 2018 op-ed in the New York Times describing himself as part of the anti-Trump “resistance.” He then expanded that into a 2019 book, scored a job at Google and went on CNN earlier this year to deny he was “Anonymous.”

You cannot trust someone who acts this way, and the fact that Taylor was a Republican, who interned in the Bush administration and later worked on the staff of Texas Rep. Mike McCaul, tells you almost everything you need to know about what is wrong with the Republican Party. If there was one issue that elected Trump, it was his pledge to stop illegal immigration, and yet Taylor is clearly part of the pro-amnesty, open-borders crowd. How did someone like Taylor get hired at Trump’s DHS?

This is what makes people hate Republicans. Democrats are the anti-American party, in favor of surrendering sovereignty to the United Nations and other globalist institutions, while replacing the American population with foreigners. Barack Obama’s father was a Kenyan socialist who hated America; both of Kamala Harris’s parents are immigrants, and she spent most of her youth in Canada. One might expect that the Republicans would represent a pro-America policy, opposed to the Democrats’ anti-American policy, and yet we find that the GOP is staffed by people like Miles Taylor who either don’t understand this issue at all, or else fully embrace the anti-American agenda.

And onto the Biden Crime Family. PM again, Hunter Biden under criminal investigation according to FBI

EXCLUSIVE: A @TheJusticeDept official confirms that in 2019, the @FBI opened up a criminal investigation into "Hunter Biden and his associates," focused on allegations of money-laundering, and that it remains open and active today. More very soon on your @WeAreSinclair stations.

Ace, Justice Department Official Confirms that the FBI Opened an Investigation Into "Hunter Biden and Associates" in 2019 -- and that that Investigation Remains "Open and Active" today

I would say "Ha-ha, let the media try to cover this up now," but that would be stupid. They are beyond corrupt. They are brazen because they think they are untouchable.

The revelation comes after Tony Bobulinski, a former business partner of Hunter Biden, came forward with a trove of documents regarding the Biden family’s dealings with now-defunct Chinese energy firm CEFC. While Joe Biden has denied that he has ever spoken with Hunter regarding the latter’s overseas business dealings, Bobulinski claims the former vice president is lying.

Additionally, Bobulinski told Sinclair that he was interviewed by FBI agents for five hours last Friday and was listed as a “material witness” for the agency.

The interview “was a very cooperative deep dive into all the facts across that time period” during which Bobulinski conducted business with members of the Biden family, Bobulinski said.


From the moment he took office, the Democrats accused Donald Trump of collusion with Russia, but it was shown, after a lengthy and expensive investigation, they hadn’t an iota of proof.

Indeed, there is a solid argument they knew they had no such evidence in the first place—even tried to manufacture it. This was one of the more repellent, if not the most repellent, political hits in our nation’s history.

With Joe Biden, the reverse is true. There is already a plethora of evidence of economic collusion with China, notably with high level members of their Communist Party, that, coupled with the activities of his son, are stunningly obvious subjects for blackmail and serious coercion.

This evidence has accrued in many forms—emails, texts, documents and the detailed public statements of Tony Bobulinski, the former Biden family business partner, including Bobulinski’s accounts of Joe’s personal involvement via face-to-face meetings about which the former vice president clearly lied.

None of this has been successfully controverted, not even remotely, while the evidence continues to grow on a daily basis, with another even bigger email dump emerging through Peter Schweizer. 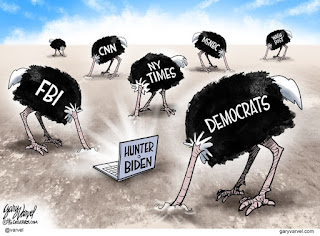 And from Lenora at America, the Blog,  Leftists Declare Pedo Hunter Biden's Laptop a Nothinburger and Advise "Love" To "Deal With" Nazi-like Trump Supporters and Biden Family Enmeshment or Worse: What Are Their Actual Relationships With Each Other? "This is an oddly wealthy society family from Delaware who can't keep their paws off each other."

And then, there is the disingenuous response of the press to this matter. I managed to skip these yesterday, so today it's double stuffed. Tyler O'Neil at PJ, Evidence of Joe Biden Corruption Just Keeps Piling Up, and the Media Refuses to Cover It. Grabien,  Media Titans Subvert Reality About Biden/Ukraine Profiteering  Not to mention China, which I find to be a greater national security threat. But it's a pretty good layout of Hunter and Joe's Ukrainian adventures. Jim Treacher at PJ Media, CNN Refuses to Run Ad Criticizing Biden

CNN has informed the largest outside group supporting President Trump’s reelection that it will not run one of its new ads, saying the ad is false because it warns Democratic nominee Joe Biden will raise taxes on the middle class and implies that Speaker Nancy Pelosi (D-Calif.) supports socialist policies. 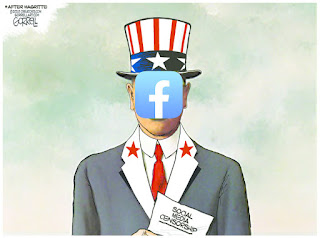 Jordon Davidson, Da Fed, Twitter, Facebook Confess There Is No Evidence Of Russian Disinformation Behind Hunter Biden Story. Fox, Zuckerberg 'not aware' that Facebook election integrity official worked for Biden. I doubt it. NYPo, Twitter’s continued ban on The Post has no rhyme or reason — only bias and Twitter CEO Jack Dorsey falsely tells senators company lifted ban on Post exposé. Ace, Zuckerberg: We Censored the Hunter Biden Story Because an Unnamed Individual at the FBI Told Us to be On the Lookout for Russian Disinformation

1. The FBI gave him a general, nonspecific warning about Russian disinformation, and Zuckerberg is just using this as an excuse for his own company's partisan censorship.

2. More chillingly -- the FBI, which was sitting on the laptop for a year and thereby keeping the story bottled-up, took the extra step of poisoning the well and claiming that the story was Russian disinformation to Zuckerberg, to make sure it got censored if it did come out.

If Zuckerberg's telling the truth, it's #2.

Leah Barkoukis at Town Hall, What Crenshaw Realized About the Democratic Party After Big Tech Hearing That 'Should Terrify Americans'

Biggest take away from the big tech hearings:

1) Jack Dorsey is a partisan and a hypocrite.

2) There are no liberals left in the Democrat Party. Not a single Democrat Senator defended free speech or freedom of the press today.

This should terrify Americans.

So they drove one of the last honest liberals in the press out, NYPo, Glenn Greenwald quits The Intercept over ‘censorship’ of Hunter Biden article.

My Resignation From The Intercept

The same trends of repression, censorship and ideological homogeneity plaguing the national press generally have engulfed the media outlet I co-founded, culminating in censorship of my own articles.https://t.co/dZrlYGfEBf

Zach Evans, NR, The Intercept Co-Founder Glenn Greenwald Resigns, Alleging ‘Censorship’ of Views ‘Critical’ of Joe Biden. Althouse, Journotlism,   "The investigative journalist Glenn Greenwald has resigned abruptly from the Intercept, the news website he co-founded, and accused the organization of seeking to censor him over a planned article critical of the Democratic nominee, Joe Biden." and Glenn Greenwald's article on Joe and Hunter Biden that The Intercept censored... ... is self-published by Greenwald at Substack. . . .
A bunch of similar, and overlapping links at JJ Sefton's The Morning Report - 10/30/20 at Ace's.
Posted by Fritz at 10:10 AM