Russiagate: Biden and Beyond

A bit of a turn around from the usual fare, a big serving  of the Biden crime syndicate coverage, and few morsels of Russia/Spygate for dessert. 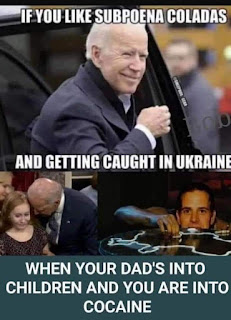 From Jon Hinderacker at Power Line, How Do We Know the Hunter/Joe Biden Documents Are Real?


First, because Biden hasn’t denied that the hard drive belonged to Hunter, and the documents contained thereon are real. His calling the Post’s stories a “smear” was a non-denial denial.

Second, because there is a witness. The Democrats have to be careful, because there is a real, live repair shop owner who is ready to explain what happened and to vouch for the integrity of the hard drive. I think this is largely why Biden et al. have gone to ground rather than seriously contest the corruption to which Hunter’s files testify.

This is the story of an American patriot, an honorable man, John Paul Mac Isaac, who tried to do the right thing and is now being unfairly and maliciously slandered as an agent of foreign intelligence, specifically Russia. He is not an agent or spy for anyone. He is his own man. How do I know? I have known his dad for more than 20 years. I've known John Paul's dad as "Mac." Mac is a decorated Vietnam Veteran, who flew gunships in Vietnam. And he continued his military service with an impeccable record until he retired as an Air Force Colonel. The crews of those gunships have an annual reunion and Mac usually takes John Paul along, who volunteers his computer and video skills to record and compile the stories of those brave men who served their country in a difficult war.

There are certainly no guarantees that the son is as good as the father, but it's a place to start. And as for accusations that he is a Russian agent, there is one fact that virtually proves he is not, the Adam Schiff endorsement of the charges. Fox, Adam Schiff claims Hunter Biden email stories come 'from the Kremlin', Chuck Ross at Da Caller, Adam Schiff Accuses Trump Of Helping Kremlin ‘Propaganda Coup’ By Touting Hunter Biden Emails. Twitchy, Neera Tanden’s working hard to Russia-shame reporters raising questions about the NY Post’s story on the Bidens.

"How dare you report on my political party" https://t.co/jUVizodFYp

The AP  whines that the Biden email episode illustrates risk to Trump from Giuliani while at Da Beast, Bolton Warned His Staff To Stay Away From Russia-Aligned Rudy Giuliani. And we all know Bolton had Trump's best interests at heart. /sarc

WOW >> Sources tell Fox News that "the big guy" who was supposed to receive a 10% equity stake in Hunter's deal with the Chinese refers to former Vice President Joe Biden. https://t.co/HMDzHO2scY

And more from the NYPo (apparently Rudy's favorite place to leak), Hunter Biden also had business dealings in Kazakhstan: report. Is there a dictatorship too obnoxious for the Biden's to take bribes from? At Lawrence Person's BattleSwarm Blog, Hunter Biden Has An Armory Of Smoking Guns. And I'm sure Rudy has a plan to bring them to light one by one over the next two weeks.

Obama didn't want Biden to run because he knew it would expose how corrupt his entire administration was. This is pretty clear to see for those of us paying attention.


First, maybe most importantly, is the insight we have gained into how children of powerful politicians can use their access and influence to get rich. The expression “influence peddling” seems somehow insufficient when talking about the kind of multi-million-dollar deals Hunter Biden was reportedly arranging.


And there are tantalizing hints that Joe Biden, former vice president and current Democratic presidential nominee, was in on the action. A May 13, 2017, email reportedly sent to Hunter with the subject line “Expectations” discussed a venture with the former Shanghai-based conglomerate CEFC China Energy Co. Hunter, as Chair or Vice Chair, was expected to earn a salary of “850,” probably $850,000 a year. The details of the “remuneration packages” for six people involved in the deal include a breakdown of the equity percentages, including 20% for H (Hunter) and “10 held by H for the big guy.” Was the “big guy” his father? It is unclear, but in an alleged text to his daughter Naomi, Hunter complains about how he gets no respect and says, “I hope you all can do what I did and pay for everything for this entire family for 30 years. It’s really hard, but don’t worry, unlike Pop [Joe Biden] I won’t make you give me half your salary.”

Da Blaze, House Republicans demand answers from FBI director about Hunter Biden's hard drive after NY Post exposé "They want to know if the FBI had possession of the hard drive in 2019." A good question, to which Wray should be made to answer soon. David Marcus at Da Fed, The Biden Emails Prove Impeachment Was A Sham

And here we are. If these emails are accurate, then it is as clear as is the summer sun that Hunter Biden was absolutely selling access to his father and the Obama administration in exchange for his lavish salary. This was literally at the heart of the Trump defense, and it really is a silver bullet. What reasonable person would even suggest that the president of the United States may not push allies to investigate legitimate corruption involving the executive branch of the federal government?

Karen Townsend at Hot Air  On The Campaign Trail: A Reporter Did His Job And Joe Biden Lost His Mind.Some people blame senility, but that may just be Joe being Joe exacerbated by dementia. Biden has always had a hair trigger, and quick to go on the offense against unfavorable coverage.

UkraineGate Part 1 – A Not So Solid Prosecutor

Michael Dougherty at NR, Social Media vs. the American Right

Let’s be absolutely clear on this: This is a clear sign of conservative weakness. Silicon Valley companies such as Facebook and Twitter took dramatic and unprecedented action to slow the circulation of the New York Post’s stories about Hunter Biden’s emails because they see it as in their interest. Billionaires usually become billionaires by knowing what is in their interest. This is a bet, first of all, on the election of Joe Biden and an attempt to mollify liberals who are still sore about 2016. It is a bet against Josh Hawley and the small band of GOP figures who want to regulate the Valley. 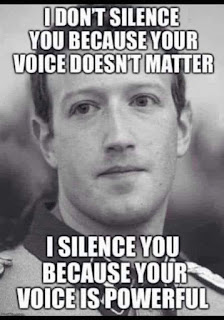 Anna Makanju is the Facebook executive in charge of “election integrity on the platform”; and guess what her job was before that position… “Previously, she was the special policy adviser for Europe and Eurasia to former US Vice President Joe Biden”. (citation)

Fox, Parler CEO says Facebook, Twitter 'not acting in good faith' "The Twitter competitor saw a surge in downloads this week" You don't say?
Bruce Golding at NYPo, Twitter still holding The Post’s account hostage over Hunter Biden links. Of course, they're not even trying to pretend objectivity.
And in Russiagate proper? Nicholas Bllasy at JTN informs us that Georgetown University hired fired FBI agent Peter Strzok as an adjunct professor. Adjuncts don't usually make much. I wonder how much he's getting paid. And mostly just to annoy Trump, Col. Bearclaw, Lincoln Project enlists whistleblower Alex Vindman for anti-Trump DC ad buy
From atop da Hill, Trump says he agrees '100 percent' with 'lock her up' chants about Clinton. And he should. She broke all kinds of laws knowingly.
And from the San Diego Trib, Commentary: I won’t work in Attorney General William Barr’s Justice Department any longer. Another mole gone.
Posted by Fritz at 11:32 AM