Russia and Iran are attempting to influence the 2020 elections and have obtained some voter registration information, Director of National Intelligence John Ratcliffe said at an FBI press conference on Wednesday.

Ratcliffe noted that both nations had taken specific actions to influence voters' opinions. He noted that the registration information they obtained could be used to confuse voters through false communication.

The Iranian interference that's been discovered, Ratcliffe said, has been designed to incite social unrest and damage the president.

"This data can be used by foreign actors to attempt to communicate false information to registered voters that they hope will cause confusion, sow chaos, and undermine your confidence in American democracy," he said. "To that end, we have already seen Iran sending spoofed emails designed to intimidate voters, incite social unrest, and damage President Trump. You may have seen some reporting on this in the last 24 hours or you may have even been one of the recipients of those emails."
. . .
The news conference was held as Democratic voters in at least four battleground states, including Florida and Pennsylvania, have received threatening emails, falsely purporting to be from the far-right group Proud Boys, that warned “we will come after you” if the recipients didn’t vote for President Donald Trump.

The voter-intimidation operation apparently used email addresses obtained from state voter registration lists, which include party affiliation and home addresses and can include email addresses and phone numbers. Those addresses were then used in an apparently widespread targeted spamming operation. The senders claimed they would know which candidate the recipient was voting for in the Nov. 3 election, for which early voting is ongoing.

DNI says Iran acting againt Trump, not for, and Russia taken not action. Yet this blue check tweets that Iran trying to help Trump. How is this misinformation not flagged by @twittersupport @twitter @jack https://t.co/qQey29wgjt

From Kylee Zempel at Da Fed, FBI: Lincoln Project Never Trumpers Peddled Iranian Disinformation Meant To Help Biden. Oh man, it must have hurt Wray to have to go public with this.

The FBI now confirms Iran sent these fake emails posing as 'Proud Boys' to help Joe Biden so @ProjectLincoln and other left wing accounts all spread Iranian disinformation meant to assist Biden. How do they feel about being Iran’s useful idiots? https://t.co/hQ4Mj2c8bL


They say that most of Russia/Iran's activity is aimed at hurting Trump.

Does that mean Joe Biden will quit the race? It has been suggested for four fucking years that Trump should resign because Sydney Blumenthal started a rumor that Putin favored him.

So now that we know Putin favors Biden, he'll be quitting the race, yes-yes? 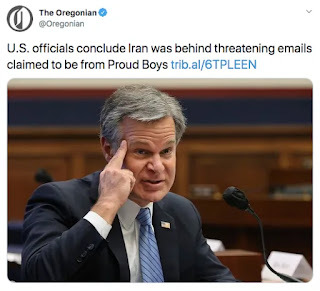 Tongue firmly in cheek, Insty,  I’M SURE THERE WILL BE LOTS OF APOLOGIES NOW:


No, NYT, The Intelligence Director Who Is Undermining Trust and Truth "John Ratcliffe is breaking norms, which could weaken our defenses." Only if you define the norms as having the intelligence agencies in the business of trying to overthrow a duly elected President.

Althouse, "Trump weighs firing FBI chief..." "Trump aims for adulation..." — the Washington Post reports on the inside of Trump's head.

1. "Trump aims for adulation. Biden goes virtual. The two are running vastly different presidential campaigns." The facts here are that Trump is doing rallies, while Biden is staying out of view. "Trump has been spending heaps of cash staging crowded rallies designed to motivate his most fervent fans...." Where is the evidence that Trump is seeking "adulation" as opposed to simply trying to win the election using a method that has worked in the past and that he's good at? The rallies are shown on TV, and it's free coverage, so, like paid advertising, it's a way to reach people who are holed up at home. WaPo is gratuitously inserting the popular Trump-is-a-narcissist theory into its news headline.

From Bruce Hayden in the comments

We don’t actually know that Trump is contemplating firing FBI Dir Wray, but a lot of his supporters sure expect him to. The most egregious problem is that he his agency has had Hunter Biden’s laptop for 11 months now, and it would have been very useful to Trump when going through the impeachment process for his call with the Ukrainian President. As egregious, Wray has been slow walking and obstructing the release of SpyGate documents, which his boss, Trump, had specifically ordered. Constitutionally, Wray owes his first duty of loyalty to the Constitution, and secondly to Trump. Instead, he has put his loyalty to the FBI ahead of both. Wray should also taken the lead against the violent rioting by the Marxist AntiFA and BLM, but has concentrated against Inga’s Bugaboo Boys. That lead has instead been taken by DHS, with the Marshals for muscle.

I don’t thing that AG Barr is going anywhere. He has been making progress with unraveling SpyGate, and I think that we can expect indictments in the near future. It’s a sprawling criminal enterprise that extends to the top of the Obama/Biden DOJ, FBI, CIA, and evening to the top of that Administration, with the meetings with both Obama and Biden. These take time to unwind, esp, as here, where the documents are highly classified, and that classification is controlled in many cases by Dir Wray, who has actively been thwarting and undermining the investigation. Barr’s big sin here has to have stuck with long time DOJ rules of not releasing information derogatory to the opposition in the months right before an election. Sure, AG Lynch did it. But we have known since before she was confirmed, that she was crooked. That, her gender, and skin color, were her qualifications for the job. But Barr is honorable, and while Trump gets frustrated with Barr sometimes, I think that he knows that his AG is trying hard, while doing the right thing.

To summarize- Wray is Deep State, and has to go. Barr is not, and is very obviously doing his job.

Chuck Ross at Da Caller, Steele Dossier Source Threatened To Sue Republicans For Calling Him A Russian Spy. Good luck with that, since the FBI actually investigated him as a potential Russian spy, and Steele Dossier Source Comes Out Of Hiding, Says He Stands By Trump ‘Pee Tape’ Allegation

“I got it right,” he told the Guardian of the so-called “pee tape” allegation.

Danchenko did acknowledge in his interview with The Times that information he fed to Steele could have been inaccurate.

“Even raw intelligence from credible sources, I take it with a grain of salt,” he told the newspaper.

“Who knows, what if it’s not particularly accurate? Is it just a rumor or is there more to it?”

Seems solid to me!

Breitbart, Former Clinton Aide Behind Calls for Investigation Following Pompeo Pledge to Release Hillary Emails. There's something in there they really don't want us to see; it must be the yoga routines, and Chelsea's wedding plans.

Former FBI agent Peter Strzok who was fired from the bureau in 2018 has been hired as an adjunct professor by Georgetown University teaching counterintelligence and national security courses.

Strzok is now listed on the university's website as “Adjunct Professor - Undergraduate Program,” and has added to his Twitter bio that he is a Georgetown “adjunct prof and alum.”

Strzok will teach a course on “Counterintelligence and National Security,” which “ is an upper-class seminar which explores the theory and practice of counterintelligence as a part of U.S. national security.” It is “designed to expose students to the type of issues and work they would be expected to perform as entry level professional employees within the U.S. intelligence community.”

“The faculty for this new seminar is in a VERY high-level Intel position!” boasts the course description.

Rather say  “The faculty for this new seminar WAS in a VERY high-level Intel position!”

Strzok was fired from the FBI after anti-Trump text messages with his married lover Lisa Page were made public as well as amid concern that he had undermined the integrity of the FBI and other intelligence agencies with his direct partisanship and animus toward the president.

A statement before Congress from Justice Department Inspector Michael Horowitz asserted that the messages were not appropriate and “cast a cloud over the Midyear investigation, sowed doubt about the credibility of the FBI’s handling of it, and impacted the reputation of the FBI.”

“Moreover, we found the implication that senior FBI employees would be willing to take official action to impact a presidential candidate’s electoral prospects to be deeply troubling and antithetical to the core values of the FBI and the Department of Justice,” the Horowitz added.
. . .
David Randall, Director of Research at the National Association of Scholars, reacted to the announcement, telling Campus Reform, "Higher education prides itself on hiring professors whose prime qualification is hatred of America, such as Angela Davis and William Ayers."

"Georgetown's decision to hire Strzok is disgraceful, but typical. Strzok, alas, has not chosen the path of disgraced officials such as Charles Colson, who redeemed themselves by repentance and a humble rededication to public service. Americans of good will hope that Strzok will imitate Colson, seek redemption, and turn aside from the Vanity Fair of adjunctships, book deals, and TV commentary. When he has repented, he should be greeted with compassion and forgiveness."

Linked at Pirate's Cove in the Sorta Blogless Sunday Pinup and links.