The Bidens in Hiden'

The strange saga of the Biden criminal syndicate continues. Andrew Kerr at Da Caller, Hunter Biden Emails Could Be ‘Absolutely Verified’ If Rudy Giuliani Released The Metadata, Expert Says. And Giuliani is too smart not to know that. He's dribbling things out, hoping to catch the Biden's in obvious lies. So far, the old man hasn't taken the bait. In Can Joe Biden Really Win This Way?, Stacy McCain details how Slow Joe stopped a press conference when confronted about Hunter's computers and the FBI.

Never in my life have I witnessed anything quite like this. The Biden campaign announced that Biden would be in seclusion until Thursday, when he is scheduled for the next debate with President Trump. So they’re taking the candidate off the campaign trail for four full days. Meanwhile, Trump is doing multiple rallies every day — with massive crowds of thousands — and yet, we’re told, Biden is ahead in every poll . . .

Dan Chaitin at WaEx, 'You just made the connection': Top senator asked if FBI investigated child pornography on Hunter Biden's laptop and Liz Vaughn at Bongino,  If the Emails Mean What We Think They Mean, a Biden Presidency Would Be an Existential Threat to U.S. National Security. Well, the FBI has already stated that the Chinese prefer Biden.

And Guliani watched videos and photos on famous laptop. He says this is perfect blackmail opportunity by Chinese Communists vs. Biden. https://t.co/y73EaOQtVE

Sounds like everyone is coming to same conclusion. Biden is compromised by Chinese Communist Party. https://t.co/Ih65R9TAjT

BREAKING NEWS. My sources- as high up as it gets- watched videos on Hunter's laptops TODAY. Just told me point blank...no rumor...they saw Hunter raping & torturing little Chinese children...Chinese govt has the same videos...Biden is compromised. Blackmailed. Can NEVER be Prez. 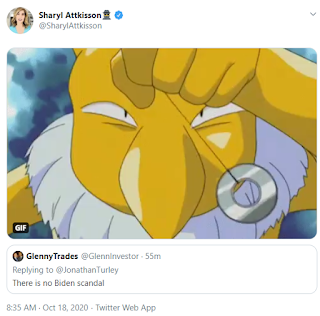 It’s now been four days since The Post dropped the first Hunter Files story, and neither Joe nor Hunter has disputed a single material fact.

The easiest thing they could do is to say, “That laptop isn’t ours, Hunter didn’t send/receive those e-mails.”

Yet they haven’t done that

At The Morning Report - 10/19/20 at Ace's JJ Sefton has nearly as many links as I do, with minimal overlap.
When you've lost CNN . . . Matt Vespa at Town Hall, CNN's John King: I'll Say It...Hunter Biden Is a Swamp Creature. I'll bet he still votes for the crime family. Uh oh (NYPo), Joe Biden’s polling lead slips in wake of Post report on Hunter.
The only "regular Russiagate, two from Sundance, Sunday Talks: Kevin McCarthy and Devin Nunes Discuss Joe Biden, DOJ and FBI Corruption…
and a question, How Long Has The U.S. Intelligence Apparatus Been Selecting Presidential Candidates?…
Posted by Fritz at 9:54 AM