Justice Amy Coney Barrett. Just had to throw that one in. Confirmed 52-48, with all Democrats and Susan Collins voting no, and almost immediately took the constitutional oath from  Justice Thomas. She will take the oath of office later today at the court from Justice Roberts. Stuff it, Chuck!


So where were we? Ah yes, Margot Cleveland at Da Fed says Lesley Stahl Is Wrong And Trump Is Right: The Obama Administration Spied On The Trump Campaign, but we knew that. But it's important to keep it out there because the Democrats and the press (but I redund) are trying to write a false history. 'Adam Mill' at Am Great thinks Dangerous Spygate Denials Show Intelligence Now Controls Media 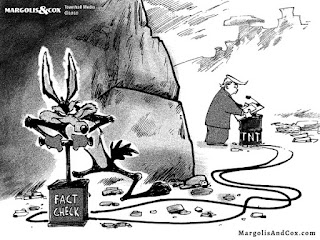 Did the Obama Administration spy on the Trump campaign? Close followers of the Russia collusion hoax consider this a settled question: Yes, of course they did. The evidence is abundant. Yet when Trump makes this claim to the public, the “fact checkers” pounce to rewrite history.

In May 2019, Attorney General Bill Barr commented on the definition of spying: “I think spying is a good English word that in fact doesn’t have synonyms because it is the broadest word incorporating really all forms of covert intelligence collection.” But are we really doing this? Do we have to go back over the list to re-educate “journalists” in the post journalism environment? Apparently we do.

Bear in mind that we’re still not privy to everything the Obama Administration did. But we know enough based on publicly-available information to fact-check the fact checkers. Below is a partial list of clearly-established examples of Trump being spied upon by our own government. . .

There's nothing new in the list, but it's a useful reminder.

Chris Farrell at Gatestone asks Why Does Barr Let Wray Lie and Flout the Law? In my view, it's because Barr is an institutionalist. The DOJ uber alles, he'll tolerate a lot not to upset the whole applecart. He's been good to Trump, better than Sessions by far, but not Ric Grenell or John Ratcliffe good.

Fox, Trump could remove Wray as FBI Director if reelected: sources. He could do a lot of things, but this is one thing he should do. Wray is past his use by date. At Hot Air, AllahPundit whines that Trump Planning To Fire Chris Wray, Mark Esper, Gina Haspel If He Wins

I don’t understand why there’s a caveat, “if he wins.” Why wouldn’t he also fire them if he loses?

For a normal politician, the answer would be, “Because he’ll be out of office in less than three months. Why decapitate important agencies — law enforcement, the military, intelligence — when you won’t get to fill those vacancies?”

But Trump isn’t a normal politician. The moment he’s no longer accountable to voters, he’ll be free to indulge his petulance by punishing deputies whom he believes contributed to his defeat because they refused to weaponize their official powers against his political enemies. Wray’s sin is not announcing an investigation into Joe and Hunter Biden in the closing days of the campaign. Haspel’s sin was opposing declassification of Russian intelligence on Hillary Clinton for fear that it was unreliable and might reveal sources and methods. Esper’s sin was regretting Trump’s Lafayette Park stunt and resisting his attempts to send regular troops into the streets against rioters under the Insurrection Act.

There was a story that went 'round about the insubordinate Jim Mattis.

The story was this: Trump told Matthis to prepare an orderly withdrawal from Afganistan. He gave Matthis six months to plan it.

Jim Mattis did not plan it. He intended to keep the troops there, forever, against the President's intentions. He figured he would just stall Trump indefinitely.

A few months later, Trump asked about the plans to withdraw troops from Afghanistan.

Once again, Mattis -- insubordinately, and unconstitionally -- gave Trump the stall, telling him the plans weren't finished yet.

Trump then ordered the draw down of troops in Afghanistan, and Mattis and all of his cronies whined that it was "disorderly" and that they were not following an organized plan for withdrawal.

They ran the same fucking bullshit with the withdrawal from the Iran nuke agreement.

These people think they should be running the country -- but they don't want to go through the process of having their affairs, with both women and boys, examined.

So they just unconstitutionally seize power.

And then they whine to the press when the president seizes back his legal, constitutional authority to make the foreign policy of the United States.

NEW: A senior administration official tells @CBSNews POTUS has soured on CIA Director Haspel for "failing to execute his national security priorities” + frustration over the pace of declassifying records related to Russia probe, among other issues. The SAO said need to protect

Christian Datoc at Da Caller, If Trump Wins Reelection, These Top Administration Officials Could Likely End Up On The Chopping Block


Fox News reported Monday, however, that while Trump does intend to fire Wray immediately if he wins reelection, Haspel’s job is safe for now.

“Haspel isn’t going anywhere,” one administration official told Fox. “POTUS has a good relationship with her.”

I don't know enough about Haspel to know if she's playing straight or not, but being a Brennan acolyte is not a strong recommendation. Presumably the President will know.

Lawyers for a trio of Russian bankers asked a federal judge on Friday to order Igor Danchenko, the primary source for the Steele dossier, to appear for a deposition regarding his work on the salacious document.

The lawyers, who represent Alfa Bank, said in a court filing on Friday that Danchenko had rejected a subpoena to appear voluntarily for a deposition in a lawsuit against Fusion GPS, which commissioned the infamous dossier on behalf of the Clinton campaign and DNC.

In a memo dated Sept. 14, 2016, Steele alleged that the owners of the bank had bribed Russian president Vladimir Putin. (RELATED: FBI Investigated Igor Danchenko As A Possible Russian Spy)

Steele has said that he relied on only one source — identified in July as Danchenko — to collect information on Trump, members of the Trump campaign, and Russian government officials’ election meddling efforts.

The owners of Alfa Bank have vehemently denied the allegation that they have bribed Putin. In addition to their lawsuit against Fusion GPS, they have sued Steele in London, where he is based.

It's far more likely that the bankers were squeezed by Putin.