As promised by Rudy Giuliani, the hole for the Biden's keeps getting a little deeper every day. Yesterday we found out the laptop computer was in the FBI's possession, that the laptops were not part of any Russian operation, and that pictures on the laptop clearly showed Hunter "cavorting" if you know what I mean,  with young girls, and that, in case the FBI couldn't bring themselves to be interested in a little ephebophilia during an election year, Rudy had also delivered copies to the Delaware State police, who would also have jurisdiction. Of course, I have no more confidence in the Delaware police than I do in the FBI, but now that the material is out there, it's going to keep eating at the edges.

The FBI & DOJ concur with DNI Ratcliffe’s assessment that Hunter Biden's laptop and the emails in question were not part of a Russian disinformation campaign. FBI does has possession of the Hunter Biden laptop in question.@DNI_Ratcliffe @FBI

2) The FBI DOES have possession of the Hunter Biden laptop in question.

BREAKING: @RudyGiuliani announces he has turned over Hunter Biden hard drive to Delaware State Police due to pictures of underage girls and inappropriate text messages

She told my therapist I was sexually inappropriate with [name redacted when she says that I face time naked with her and the reason I can't have her out to see me is because I walk around naked smoking crack talking [redacted] girls on face time. When she was present she said that [redacted] never said anything like that but the bottom line is that she I create and caused a very unsafe environment for the kids. If it stopped there I would let it go but then [redacted] friend [redacted] sober coach.


Roger L. Simon at ET think Hunter Biden Was Trying to Tell Us Something, but it's behind a stupid pay wall. But Insty has a big quote.

Whether he did it accidentally, on purpose, or (most likely) something in between, when Hunter Biden left a laptop loaded with incriminating evidence about himself and his family, at a computer repair shop in Delaware, he was trying to tell us something.

That something was that his father, aka the “big guy,” who had only days before announced he was running for president, was big trouble.

You don’t have to be Sigmund Freud to figure that out. Nor is it hard to figure out why Hunter might have become an addict and engaged in other self-destructive acts not suitable for a family website but apparently immortalized on the hard drive.

The Joe Biden that is being sold to us ad infinitum as Mr. Just-Plain-Folks-American was not the man his son saw. (This is not to absolve Hunter of responsibility for his actions, but to put them in perspective.) 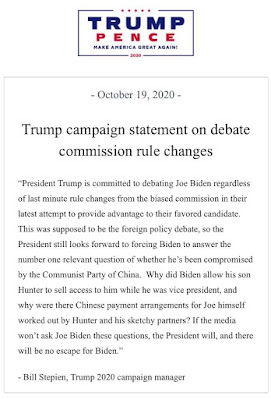 Insty, OUCH. Salena Zito, WaEx, If Joe Biden lies and the media ignore it, does he make a sound? Althouse, "Facebook and Twitter's frantic attempts to stop the spread of the New York Post's Hunter Biden story didn't prevent the article from becoming the top story about the election on those platforms last week."

"This gets at the fundamental question that we're facing in 2020 of what is truth, what is information and how does a platform like Twitter or Facebook evaluate truth?" Bryce Webster-Jacobsen of cyber intelligence firm GroupSense tells Axios. "Nudity and terrorism and violence — those are pretty objective measures. Truth is much more subjective."

Axios is sad that  NY Post story goes massive on social media despite crackdown. Rich Lowry at NR writes on The Biden Protection Racket "Joe Biden is the most cosseted presidential candidate in memory."

The refusal of the mainstream media to cover the Hunter Biden corruption scandal—which directly implicates Joe Biden—reveals the full depths of their dishonesty. We can barely trust a word coming from these habitual liars #FakeNews

Jazz Shaw at Hot Air VIP, Former Twitter Exec: Trump Must Be Muted Until After The Election

TUCKER: "This afternoon, we received nonpublic information that proves it was Hunter's laptop. No one but Hunter could've known about or replicated this information. This is not a Russian hoax. We are not speculating." pic.twitter.com/cl2ktdmdVc

Right now, the public trust the FBI about as much as they trust Cardinal Bernard Law to investigate sex abuse in Boston. They are just as skeptical about the truthfulness of the president, the House, the Senate, and the two political parties.

This pervasive mistrust is deeply damaging to a democracy. We need sunlight. As we debate the issue of corruption swirling around a presidential candidate, we need to know that we are debating real documents, not disinformation, and we need the freedom to do that openly, without permission from Twitter and Facebook. Our democracy cannot be run by Big Tech hall monitors. 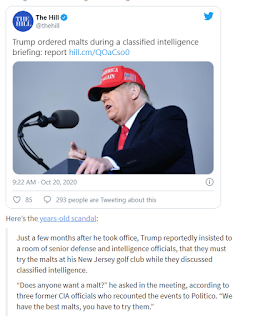 In some amusing Russiagate, Ace has an all caps, bold, red italic font and a pyramid of flaming skulls for REVEALED: THREE FORMER CIA OFFICIALS TELL POLITICO THAT TRUMP MADE THEM DRINK MALT CHOCOLATES AT AN INTEL BRIEFING. Oh my God, that's inhuman. Think of all the carbs!
WaEx, Michael Flynn endorses Doug Collins in Georgia Senate race

"America and the citizens of Georgia need the 'forged by fire' leadership of Doug Collins in the United States Senate," Flynn told Fox News on Tuesday. "As the deep state attacked our very way of life, Doug Collins was willing to stand in the breach, shoulder to shoulder with our president, Donald J. Trump."

Flynn has become a celebrity of sorts for supporters of President Trump and those deeply critical of the criminal investigation into Trump's supposed ties to the Russian government.