A drippy day here in paradise. Maybe it will clear later long enough for a walk.

The appointment of David Kris, a former Obama administration DOJ man, who was on record as supporting the FISA warrants against Carter Page, and opposing Devin Nunes successful attempts to reveal the machinations involved, by the new presiding judge of the FISA court Judge Boasberg to oversee the reforms of the FISA process demanded by the court and outlined by FBI director Christopher Wray is drawing flak. Ace, Surprise! FISC Court Picks a Kneejerk FBI-Defender and Collusion Conspiracy Peddler As Its Pointman to Fix the Broken System He Claimed Wasn't Broken At All. "Ever get the sense that our Ruling Class is just tired and wants us to put them out of office?" Jonathon Turley, FISA Court Selects Lawyer Who Vehemently Denied FBI Misled FISA To Oversee FBI Reforms. John Sexton at Hot Air, Ex-DOJ Official Picked To Review Changes To FISA Court Process Was A Critic Of The Nunes Memo. Power Line's Scott Johnson, We now know: FISA court must go. Sundance at CTH, FISA Court Selecting Surveillance State Advocate, David Kris, Shouldn’t Be a Surprise… "This is a little weedy, but it’s important….".

Stop and read that again.

Even before Mr. Kris was given this new FISC assignment, it was already his job to manufacture process arguments, find obtuse angles to justify the procedures being used, and provide the FISA judges with the plausible deniability they need in order to keep rubber stamping the fourth amendment violations.

It’s a scheme. A legal game of whac-a-mole. Every time the DOJ and FBI violate the fourth amendment; and every time they are caught in a compliance audit; Kris comes into the picture as the ‘fixer’, with the job to keep the non-fixable system going.

I have to say, it shows either incredible ignorance and insensitivity on the part of the judge, or it's just a deliberate poke in the eye, in which case the FISA court should be abolished. He couldn't find someone with a least a glint of non-partisanship? Chuck Ross at Da Caller, Mark Meadows: GOP Will Appeal To Surveillance Court Over Choice To Oversee FBI Reforms


Rep. Mark Meadows said Monday that congressional Republicans plan to appeal to the Foreign Intelligence Surveillance Court (FISC) over its choice to oversee the FBI’s surveillance reforms in the wake of a damning inspector general’s report regarding the bureau’s wiretapping of Carter Page.

In an interview with journalist Sara Carter, Meadows criticized the FISC’s pick of former Justice Department official David Kris to assist the court to ensure that the FBI implements the reforms.

“I can tell you that a few of us, are not only appealing this to the judge who has now taken over the FISA process but we are also looking at this when it comes to renewing the FISA process within Congress,” Meadows told Carter.


The former US Treasury Department staffer accused of leaking confidential information to a reporter pleaded guilty Monday to a single count of conspiracy.

The 41-year-old’s plea comes as she was approaching trial on charges including conspiracy to make unauthorized disclosures between October 2017 and October 2018 while working for the treasury department’s Financial Crimes Enforcement Network.

Prosecutors accused the Virginia woman, who was arrested in 2018, of passing along suspicious activity reports to a journalist. SARs are used to flag financial transactions that could indicate criminal conduct.

“I agreed to disclose a SAR knowing I was not allowed under the law to disclose it,” she told Woods during her emotional plea.
. . .
Edwards faces up to five years in prison and a $250,000 fine at sentencing, which is set for June 9.

More (of course) from sundance, Former Senior Treasury Financial Crimes Official Pleads Guilty To Leaking Records of Cohen, Manafort, Gates, Butina and More…  I'll let you guess who's side she intended to help.


Which begs the question: Was Ms. Edwards alone in leaking the financial records, or did both the SSCI and Ms. Edwards leak that material to the media?

Why is this question important?…. Because it will determine what happens with her plea. There is a decent likelihood, perhaps even a strong likelihood, Ms. Edwards will benefit from the same issue that protected SSCI Security Director James Wolfe.

Watch the plea process closely. If my hunch is correct, the DOJ will touch Ms Edwards very lightly in their sentencing recommendation as they did with James Wolfe.

Thirdly, along the lines of the SSCI and the DOJ sentencing, it does not go unnoticed that former FBI Director James Comey’s daughter, Maurene Comey, is the SDNY prosecutor in this case.


…”This case is being prosecuted by the Office’s Public Corruption Unit. Assistant U.S. Attorneys Kimberly J. Ravener, Daniel C. Richenthal, and Maurene R. Comey are in charge of the prosecution.”… (link)

Lastly, few things shock me upon follow-up review; however, this statement:


…”The illegally disclosed SARs pertained to, among other things, Paul Manafort, Richard Gates, the Russian Embassy, Mariia Butina, and Prevezon Alexander. EDWARDS had access to each of the pertinent SARs and saved them – along with thousands of other files containing sensitive government information“…

I find the “thousands of other files” to be particularly noteworthy.

I would not be surprised to discover those files would include President Trump’s tax records; and/or the records of his business and family interests.
What exactly did Ms. Edwards extract, download and leak?

Perhaps that’s why U.S. Attorney Jessie Liu was moved into the Treasury Dept (?).

Margot Cleveland at Da Fed wonders  IG Report Bombshell: Did The FBI And DOJ Ask Putin’s Buddy To Help Get Trump? Eric Deripaska has been seen around the edges of this matter before, but this seems to indicate that the DOJ/FBI crowd solicited his aid in dumping on Trump. Foreign Russian interference anyone? Mueller, Mueller, Mueller?

Kulie Kelly at AmGreat compares Unequal Fates: A Real Obama Era Whistleblower vs. the Trump ‘Whistleblower’ "As the Trump impeachment drama continues to unfold on Capitol Hill, the so-called whistleblower in that case enjoys hero-martyr status on the Left and in the news media. Lt. General Michael Flynn has enjoyed no such treatment." It's unfair, and possibly illegal, to blow the whistle on Democrats. 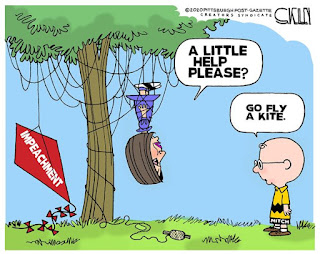 How's that Shampeachment coming? Are the articles coming over to the Senate today? Sister Toldja at Red State, Cocaine Mitch Mic Drops Pelosi, Schiff on Senate Floor: We Were Never Going to Be Dictated to by You (Watch) Craig Bannister at CNSNews, McConnell: ‘Never Going to Allow Speaker of the House to Dictate Senate Proceedings’ “House Democrats have already done enough damage. . . ” Stephen Kruiser at PJ Media, Crazy Lady Alert: Pelosi Says McConnell Is a Russian 'Accomplice'. It's Democrats go to conspiracy theory. Jerry Dunleavy at WaEx, Pelosi falsely claims court fight for Ukraine impeachment witnesses. At her age, she's lucky to remember to put her dentures in in the morning. She may have an aide for that. Fox News,  Judge Jeanine: Public humiliation of 'Pelosi and her Democrat caucus' is 'an embarrassment to watch'  Not embarrassing to me. Via the Wombat's In The Mailbox: 01.13.20, Power Line's Scott Johnson brings us Pelosi Unhinged (was she ever hinged?)

This is a deeply troubled woman who has been relegated to trafficking in discredited conspiracy theories in order to try and save her tattered reputation. 👇🏻pic.twitter.com/vXyhF8YNHN
— Dan Bongino (@dbongino) January 13, 2020

The Peacock, No impeachment witnesses against Trump? Some argue Democrats might be better off. "Analysis: Democrats have to consider whether the promise of new details outweighs the risk of letting the president talk about Joe Biden for weeks on end, say some strategists." Yep. AllahPundit at Hot Air, sadly says Dem Strategist: Actually, Calling New Witnesses At Trump’s Trial Would Be Bad For Us On Balance "“Anyone who thinks Bolton’s going to turn on Trump is on drugs,” Kofinis said." AllahPundit happily chortles CBS: White House Expects “At Least Four” GOP Senators To Join With Dems In Calling Witnesses At Trump’s Trial — And Maybe More. I myself look forward to hearing from Where's Hunter.

Capt. Ed at Hot Air VIP, Schiff: We’re Mulling A Subpoena For Bolton — Three Months Late but Virginia Kruta at Da Caller, Adam Schiff Says House Won’t Subpoena Bolton Because They’re Not Trying To Out Him As A Hypocrite. Somebody doesn't have it right. Breitbart has Pierre Delecto, Romney: I Want to Hear from Bolton, ‘Open’ to Other Witnesses “Anyone who thinks Bolton’s going to turn on Trump is on drugs,” Kofinis said." Hot Air cites the NYT in The McGahn Case: An Epic Constitutional Showdown

Jordain Carney on Da Hill, GOP leadership: There aren't 51 votes to dismiss Trump articles of impeachment. So we'll at least go through the motions of a trial. Politico, hopefully suggests How Schumer might get the last laugh on impeachment trial "Democrats plan to squeeze vulnerable Republicans with a series of tough votes that could hurt them in November."

Rasmussen reports Even Fewer Expect Trump’s Removal From Office as reality starts to set in.

Politico, John Roberts may be leading the Senate impeachment trial, but this woman is shaping it "Elizabeth MacDonough, the first female Senate parliamentarian, will be advising the chief justice on how to address arcane procedural questions."

“I’ve been here with many, many parliamentarians. All were good. But she’s the best,” said Vermont Democratic Sen. Patrick Leahy, the longest active serving senator.

For the Trump trial, MacDonough’s three-person office will get the added responsibility of serving as the main liaison for Roberts, who along with a select group of aides must make the short commute into a building that they typically only visit on ceremonial occasions.

Her team will be tasked with delivering to Roberts the daily program that he’ll use to guide the proceedings. She will also be the one helping Roberts keep track of the clock as he calls on the people with assigned speaking roles — Trump’s White House and personal attorneys, Senate leaders and the House impeachment managers who will present the case for the Democrats. It’s a critical task for a chamber that operates on a series of careful agreements dictating time management.

There may be one honest broker left in Washington. I hope so.
Posted by Fritz at 10:13 AM