Seems to be warming up again, despite frosty temperatures in Washington D.C. (they're expecting snow this afternoon).

The big news, is of course, that The 'Stache, John Bolton, has said he will comply with a congressional subpoena if issued. Houston Chronic, Bolton's willingness to testify in Trump's trial ramps up pressure on Senate Republicans


"Since my testimony is once again at issue, I have had to resolve the serious competing issues as best I could, based on careful consideration and study," Bolton said. "I have concluded that, if the Senate issues a subpoena for my testimony, I am prepared to testify."

Hmm. I wonder why he didn't want to testify to the House? LI,  Bolton: If the Senate Sends Subpoena for Impeachment Trial ‘I am Prepared to Testify’ AllahPundit at Hot Air, Dems Pounce: If Senate Republicans Don’t Call Bolton To Testify Now, They’re Participating In A “Cover Up”. But are they sure it won't be something they don't like, something like, "Yeah, I didn't like what he was doing in Ukraine, but he was the boss". I would kinda like to hear what he has to say, but I also think that Democrats had their chance to make their case, they claim it's iron clad, so the Senate should go the "no witnesses" route. AllahPundit again, Josh Hawley Proposes Rule Change To Dismiss Impeachment Charges If Pelosi Doesn’t Send Them Over Within 25 Days, but does he have the votes? Sundance at CTH has the video: Senator Josh Hawley Introducing Senate Impeachment Rule Change… 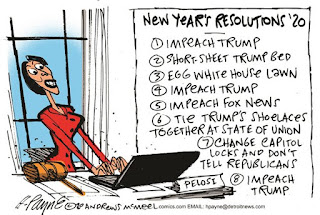 
Sen. Lindsey Graham, R-S.C., insisted Sunday that if House Speaker Nancy Pelosi does not deliver articles of impeachment against President Trump to the Senate by the end of the week, the Senate should "take matters in our own hands."
. . .
"What I would do, if she continues to refuse to send the articles as required by the Constitution, I would work with Senator McConnell to change the rules of the Senate so we could start the trial without her, if necessary," Graham proposed on "Sunday Morning Futures."

This isn't helping Nancy's case, from Da Hill, Murkowski: Decision on impeachment witnesses should wait until after start of trial. Stephan Presser at NewsMax, McConnell Channels Hamilton to Save Republic. OK, that was just a little histrionic.


Commenting on U.S. Speaker Nancy Pelosi’s unprecedented decision to hold onto the articles and not send them to the Senate so that a trial could begin, McConnell quoted Alexander Hamilton’s remarks in the "Federalist" that a "procrastinated determination of the charges" would, in McConnell’s words, "not be fair" to the president, and "would be dangerous for the country."

The Framers’ greatest fear was that the delicate balance of powers among the three branches would be upset, and that a corrupt faction would come to dominate the government. McConnell made clear his belief this had come to be the Democrats whom he said were "the intemperate or designing majority in the House of Representatives," that Hamilton "warned might abuse the impeachment power" for partisan gain.

Breitbart,  McCarthy: Pelosi Could Go to a Third Article of Impeachment. Sure, why not? It's polling so well . . .  and Donald Trump: Impeachment a Democrat ‘Con Game’ for 2020 Elections. Well, yes.

“The reason they are not sending the Articles of Impeachment to the Senate is that they are so weak and so pathetic.” @LindseyGrahamSC @MariaBartiromo The great Scam continues. To be spending time on this political Hoax at this moment in our history, when I am so busy, is sad!
— Donald J. Trump (@realDonaldTrump) January 6, 2020

Even the Democrats don't seem to be paying attention, Brooke Singman, Fox News, Forgetting something? Dem leader (Steny Hoyer) makes no mention of impeachment in House agenda memo. I guess it's not one of their prouder moments. Sundance, Jim Jordan Contrasts President Trump Foreign Policy Accomplishments Against Impeachment Fraud…

Via the Wombat's In The Mailbox: 01.06.20, Legal Insurrection has how Wasserman-Schultz Claims Trump Assassinated Soleimani To Distract From Impeachment. Because that's what they would do.

Impeachment isn't the only thing being delayed, from WaFreeBee, Where’s Hunter? Arkansas Mother Accuses Biden of Delaying Trial. Gotta look under those piles of cocaine for some cash.

On the "Spygate" front, some significant news via sundance, as Devin Nunes Tells Sara Carter: “ICIG Michael Atkinson is Under Active Investigation”…. Wow. Atkinson is the guy who received the whistleblowers original, noted that it was 2nd and 3rd hand info, and then changed the guidelines to allow hearsay in whistleblower complaints, and overlooked the fact that the whistleblower was working in conjunction with Schiff's staff. His testimony to the House was supressed by Adam Schiff, who leaked anything that could be damaging to Trump. Lots more from sundance.

Margot Cleveland at Da Fed details how Inspector General Report Shows Special Counsel Replicated FBI Abuses. Which should be no great surprise, as Mueller literally adopted the Crossfire Hurricane team intact (really, they took him as a figurehead boss).

From Chuck Ross at Da Caller, Ratcliffe Says Comey, Brennan Gave ‘Conflicting Testimony’ About Steele Dossier. So one of them is a liar? Embrace the healing power of "both."

I might have posted this once before, but it's an hour of awesomeness.
Posted by Fritz at 9:18 AM