Got a late start this morning due to the biweekly breakfast date. I just hope this all doesn't get away from me.

Meanwhile, according to the NYT, Justice Dept. Investigating Years-Old Leaks and Appears Focused on Comey, and they're not very happy about it.


The timing of the investigation could raise questions about whether it was motivated at least in part by politics. Prosecutors and F.B.I. agents typically investigate leaks of classified information around the time they appear in the news media, not years later. And the inquiry is the latest politically sensitive matter undertaken by the United States attorney’s office in Washington, which is also conducting an investigation of Mr. Comey’s former deputy, Andrew G. McCabe, that has been plagued by problems.

Ace, Cry: New York Times Whines That It's Unfair That The Department of Justice Is Investigating Leaks, Focusing on #HeroOfTheResistance James Comey


They say "years old," as if a crime that happened two and a half years ago is something you're just supposed to ignore.

Weird how that standard only applies to liberals, huh?


The new suit alleges that Rosenstein ordered the spying on Attkisson after directives -- later exposed by Wikileaks -- showed Obama officials John Brennan and Eric Holder were neck-deep in targeting journalists who were reporting on leaks about Obama administration scandals and lies. Holder’s press secretary even went to Attkisson’s then-employer CBS News complaining that “she’s out of control” with her reporting on these Obama administration scandals.

And it’s a small world, as they say, when it comes to Deep State corruption and spying on Americans. Another Defendant named in the lawsuit is Shawn Henry, who worked under Robert Mueller at the FBI and is now president of CrowdStrike Services. CrowdStrike is the company hired to review Democratic National Committee servers in a well-reported email leak scandal. Without actually examining the servers themselves, Mueller and the FBI curiously and negligently deferred to the findings of CrowdStrike that Russians hacked the servers despite assertions and evidence to the contrary. 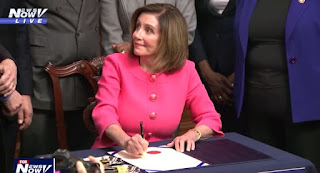 At the Shampeachment Spectacle, Althouse notices that  "[Pelosi] used a remarkable number of writing implements – more than three trays littered with them – to sign her name on the articles of impeachment against Donald Trump."


"The pens, engraved with her signature, were intended as souvenirs for Pelosi’s allies. She carefully signed the documents, apparently stroke by stroke, using different pens for each portion of her signature. Then she distributed them to impeachment managers and committee members." 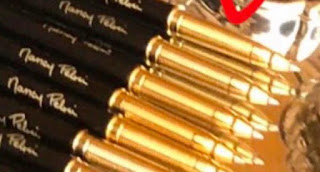 Capt. Ed at Hot Air catches even CNN: Why Oh Why Was Pelosi Handing Out Souvenir Impeachment Pens With A Grin?, more in sorrow than in partisan fury. And (the other) Megan Fox notices that Nancy Pelosi's Impeachment Pens Look Like Bullets Hidden symbolism? Conrad Black at AmGreat, This Tawdry Impeachment Spectacle Must Run Its Course. But not too soon, please.

At yesterdays PJ Media Morning Briefing by Stephen Kruiser, The Granny Wine Box Traveling Impeachment Circus Heads to the Senate. According to Ben Domenech at Da Fed Nancy Pelosi Is Doing Putin’s Bidding. He has to be laughing his ass off. At News Thud, Paul Goldberg reports Pelosi’s Slip Of The Tongue During Impeachment Presser Revealed An Astonishing Admission


My niece who’s three is more coherent, but inside that word, scramble notice how she references Putin. Pelosi said, “This is about the Constitution of the United States and it’s important for the president to know, and Putin to know, that voters in America should decide who our president is, not Putin and Russia.”

America did decide Nancy in 2016 when we elected President Trump, you people have been trying to undo the election for almost four years. Since your primary candidates are so telling you guys started this impeachment hoax in hopes of removing the President. 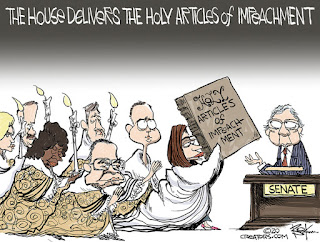 At Da Tech Guy, Nancy Impeachment Gambit Fails (but not in the way people think) "It’s one thing to risk a bunch of freshmen seats in a congress whose control you anticipate losing anyways, it’s quite another to risk the seats of others who’ve been there a while. That’s exactly what Pelosi was trying to prevent. She failed." AllahPundit at Hot Air VIP, Pelosi To Trump: If You Want To Postpone The State Of The Union Until After The Trial, Feel Free To Ask Fuck her. Show up on time, and rail on her.

The trial should be fair and not political, which is why Pelosi named as lead manager the most unhinged political foe who for years fabricated claims of treason.
— Razor (@hale_razor) January 15, 2020 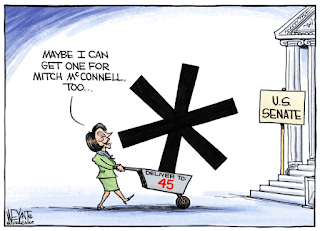 
“The president is charged with high crimes and misdemeanors, and the Senate must take seriously its constitutional role in this process. During the time when articles of impeachment are before the Senate, it would be wholly inappropriate to advance the president’s nominees to the federal judiciary.”

The Shampeachment trial officially begins as John Roberts Swears In Senators To Officially Open Trump’s Impeachment Trial (Allah Pundit) "given how this process has and will inevitably normalize impeachment, it’s something we’ll probably see every four years or so going forward" and Sundance, Impeachment Trial – Chief Justice John Roberts Swears-in Senate – 2:00pm Livestream… and Impeachment Trial Next Steps – Senate Leader McConnell Establishes Briefing Schedule…. AllahPundit, Susan Collins Ups The Ante: Yes, It’s “Likely” That I’ll Vote To Call Witnesses. So much for the Democrat Senators running for Preznit getting back out on the campaign trail.

Theoretically? Maybe, although it’s still the weakest of the weak-sauce arguments for arguing the illegality of Donald Trump’s actions in Ukraine-Gate. Even the General Accounting Office’s conclusion that the hold on congressionally appropriated military aid violated the Impoundment Control Act somehow misses the fact that it got sent in the same budget year.

It’s also not a crime, either, but a tort. We’ll get to that in a moment: 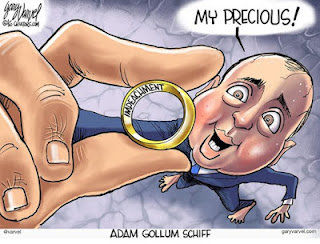 But as Matt Margolis notes The GAO Ruled Obama Broke the Law in 2014, But No One Called for His Impeachment and Double Standard Much? Biden's Threat to Withhold $1B from Ukraine Violated the Law. Tyson Reader at WaPoo, Presidents Madison and Trump did the same thing — but Trump got impeached - Why criminalizing political opposition can be dangerous.

Early in the year, John Henry, a former British spy embittered by his poor compensation, decided to exact revenge on Britain by selling secret British documents to Madison’s Democratic-Republican administration. The documents purportedly contained incriminating information about Federalists who conspired with the British government against the United States.

Henry worked through a French national named Paul-Émile Soubiron, a sleazy con artist who helped Henry recruit the favor of the French ambassador in Washington. Hoping that the documents would compel the United States to join France in war against Britain, the ambassador used Soubiron as a sort of shadow representative. Like Russian agents who peddle conspiracy theories of Ukraine’s collusion with Democrats, the ambassador hoped to convince the president that they shared a British enemy who cooperated with a supposedly debased opposition party in America.

Madison took the bait, jumping at the opportunity to confirm his suspicions about his political adversaries. He spent $50,000 of State Department money to obtain the documents. The administration asked Henry to write a misleading cover letter that implied that he donated the documents to the government, withholding the fact that Madison had paid the entire balance of the contingent foreign intercourse budget to receive them.

Initially, the papers did embarrass the president’s political adversaries after he argued that they proved Federalist collusion with Britain. Madison’s ally Thomas Jefferson privately gloated that the information prostrated Federalists. In reality, however, while the documents showed that some Federalists harbored antipathy for the union and sympathy for Britain, they yielded no legally damaging information.


A CNN source said: “Wolf really wanted to do the Pence interview personally. He cares deeply because of his family background, which is why Wolf was offered it by the White House. But Zucker stepped in and said Wolf isn’t going anywhere because the network will be ‘all impeachment, all of the time’ next week. CNN’s anti-Trump bias is so intense, they can’t even broadcast a sympathetic interview for Holocaust remembrance.” Dozens of world leaders are expected at the forum, including Vladimir Putin and Emmanuel Macron.


CNN reporter Manu Raju is receiving flowers and sympathy notes from his distraught colleagues after a Republican Senator gave him a snarky response to a question he asked on impeachment. Thursday on Capitol Hill, Senator Martha McSally of Arizona was approached by the CNN reporter and asked if “new evidence” would be allowed into the Senate trial on President Trump’s impeachment. McSally kept walking past Raju and responded, “Manu, you’re a liberal hack. I’m not talking to you.” After he tried again, she repeated again, “You’re a liberal hack.”