Nancy Pelosi wants a vote to express her love of America’s enemies:


The House will vote on a resolution limiting President Trump’s military actions toward Iran following his decision to launch a drone strike that killed a top Iranian commander, Speaker Nancy Pelosi (D-Calif.) said Sunday.
Pelosi told Democratic members in a letter that the House will introduce a vote on a “War Powers Resolution” mandating that the administration’s military hostilities with regard to Iran would cease within 30 days if no further congressional action is taken. . . .
Pelosi in the new letter called the administration’s decision a “provocative and disproportionate military airstrike” that she said endangered U.S. service members and diplomats.


As someone who went toe-to-toe with the Iranian Revolutionary Guard Corps (IRGC) in Afghanistan, I can assure you that Iranian Gen. Qassem Soleimani got exactly what he deserved when he perished in a U.S. drone strike. What he certainly doesn’t deserve is praise from Democrat lawmakers who would rather mourn a war criminal than credit President Trump for making the world safer.
As the leader of the IRGC’s Quds Force, which has been designated a terrorist organization by the U.S. government, Soleimani was among America’s most vociferous and aggressive foes. He was personally responsible for the deaths of thousands, including the killing and maiming of hundreds of American soldiers. . . .
This man was a terrorist in charge of an IRGC element that had been declared a terrorist organization. He was traveling, in violation of U.N. sanctions, to Iraq, with the apparent intent of inflicting harm on U.S. service members in the region. He was in a combat zone as a combatant in uniform — the legal basis to target him could not have been clearer, and the same goes for the moral justification.
Make no mistake, the targeted killing of Soleimani was not only justified but long overdue. Washington should have taken steps to eliminate this terrorist a long time ago.
The Democrats are politicizing this issue the way they’ve politicized every other issue since President Trump took office. They don’t even seem to care that they have to take the side of America’s enemies in order to criticize Donald Trump.

Let me add this: America’s enemies understand the value of their anti-American allies in the Democratic Party, whose love of “peace” makes it easier for terrorists to kill Americans and our allies. We know, for example, that John Kerry has been acting as an adviser to the Iranian regime, and met with Iranian diplomats in Paris in May 2018. If anyone is really serious about investigating foreign interference in U.S. elections, perhaps they should ask questions about why Iran decided to send a mob of “protesters” to attack the U.S. Embassy in Iraq.

ABC News ‘Reporter’ Dons Hijab to Promote Iranian Propaganda “Good Morning Anti-America,” you might say: It's just Martha Raddatz. I thought the point was to cover her hair. 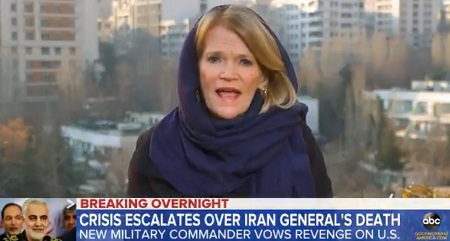 At this point, it's merely reflexive anti-Trumpism. If Trump waved a magic wand and cured cancer, the headlines would be "Trump Causes Oncologists to Lose Jobs."