As noted yesterday, Retired Lt. Gen. Michael Flynn Moves to Withdraw Guilty Plea (Breitbart) as we've been expecting for some time. It was time after the prosecution asked for jail time claiming lack of cooperation in a FARA prosecution (which failed)

We just filed a Motion to Withdraw the plea of @GenFlynn because the government acted in bad faith, with vindictiveness, and breached the plea agreement pursuant to which he has cooperated fully at great personal expense and “held back nothing” according to #prosecuters until @GenFlynn refused to LIE on demand from #prosecutors in EDVA in Rafiekian case.

At WaPoo, Devlin Barret manages to talk up David Kris without mentioning how wrong he was about the Nunes memo and the origins of Spygate, Surveillance court adviser says FBI’s changes don’t go far enough to fix problems.

Also from sundance, and on the subject of misleading media, Laura Ingraham Blocks Devin Nunes from Discussing Mary McCord Working With Adam Schiff…

Well, Shampeachent's official, by all measures, as Nancy Pelosi allowed the house to vote to send the articles to the Senate, and carried them over in a solemn ceremony, accompanied by gold souvenir pens. Althouse has The impeachment procession "Religion-like in its solemnity." First, and best comment, rcocean said... They need red noses and clown makeup.  Ace, lol: The Democrats Delivering the Fake Articles of Fake Impeachment "The march of the Fake Impeachment Players looked like the walk of shame from an orgy where it turned out that all the other orgyists were just as ugly as you",  Insty, HEH: Senate Asks Pelosi If She Can Send Over Copy Of Impeachment Articles Without Wine Stains All Over It. Michael van der Galien, PJ Media, Even CNN Admits: 'Pelosi Gambled and Lost on Impeachment Delay'

Exactly what this was always about. And Hillary Clinton will still go down in history as the one who lost to him. That doesn’t change. https://t.co/IpL9kY0t3A
— Stephen Miller (@redsteeze) January 15, 2020

Sundance has the plan, It Begins – Senate Leader Mitch McConnell Receives Articles of Impeachment and Structures Schedule… AllahPundit at Hot Air wonders Is There Any Chance Impeachment Will Be Over By The State Of The Union — Or The Iowa Caucus? Tie the Democrats into knots with this shit. 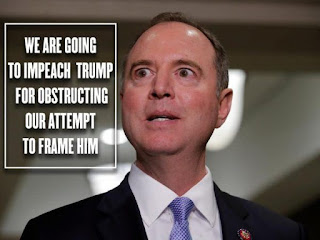 
Nancy Pelosi is about to do a big reveal. How much do you care and how much depends on who the hell the House managers are?

I find this a bit irritating, this political theater.

UPDATE: I watched the announcement, but all I remember is Nancy Pelosi going on about the Constitution and mentioning Abraham Lincoln, Paul Revere, and "These are the times that try men's souls." And somebody said that not only would Trump be on trial, but the Senate is on trial. And Nadler, looking disturbingly green, said Trump is on trial and also democracy is on trial. The frame of what's "on trial" is ever-expanding. What do you think is on trial? I'll just say it's trying my patience. And my patience pleads not guilty.

An undated note from a guy indicted on multiple federal charges of fraud and conspiracy who's already fabricated evidence in a desperate attempt to get an immunity deal from Schiff and Pelosi so he can avoid prison? That's the new smoking gun? LOL. https://t.co/xnnEsZUqo1
— Sean Davis (@seanmdav) January 14, 2020

AllahPundit, “Perplexed” Susan Collins On New Parnas Material: If We’re Only Learning This Now, It Must Mean House Dems Rushed Their Process, No?, Well, duh! and New Documents: Uh, Were Lev Parnas And An Associate Stalking Marie Yovanovitch? And If So, Why? But, hey, don't call it spying! Report: McConnell Open To “Witness Reciprocity” For Trump And House Dems At Impeachment Trial and from Beth Bauman, Town Hall, WATCH: Jerry Nadler Explains Why Hunter Biden Is 'Not Relevant' to the Impeachment Trial.


Nadler seems to forget that Joe Biden bragged about getting the prosecutor who was investigating Burisma fired. If no wrongdoing took place, like the former vice president says, why would he do everything in his power to get the prosecutor ousted? Wouldn't he be okay with an investigation taking place if everything was on the up-and-up?

Instead of wasting their time on impeachment, Democrats should be looking at the real issue here: did the Bidens engage in corrupt behavior in Ukraine?

LA Times hopes New evidence against Trump is likely to emerge during Senate impeachment trial, Schiff says, but from Breitbart, House Democrat: We’ll Keep Investigating Trump-Russia Conspiracy After Impeachment. Betsy McCaughey, NYPo, All Dems’ impeachment moves now are about dirtying up Trump before election, and some of them are fairly open about this. Hot Air cites NYT, and FWIW, Bolton Planning To Reveal Some Of What He Knows About Ukraine In Upcoming Book. Bill Thomas at AmGreat, Rip-offs я Us "Ukraine is just the tip of the stolen-money iceberg. Who knows how many billions in aid to America’s cities and other Democratic Party financial preserves have been looted by politicians and nonprofit middlemen?"

Charles Lipson, RCP, Impeachment and the Fight Over the Deep State.


Why is official Washington so determined to rid itself of Donald Trump? The usual answers focus on the country’s ideological divisions, now calcified in the parties, and Trump’s polarizing personality. Democrats of all stripes truly loathe him. All true, but those are only part of the answer.

There is a deeper reason that helps explain both the origins of the impeachment articles and the larger movement to remove Trump. The key is that Trump not only ran against Washington’s entrenched power, he is actually delivering on that promise. Nothing is more dangerous to the Beltway’s power and profits, to its most powerful actors and the foot soldiers behind them. Those endangered interests are the essential backdrop to the House impeachment and Senate trial.

Trump not only ran against the capital’s lobbyists, lawyers, and bureaucrats, he has avoided capture by them since taking office. Instead of making his peace with traditional Republican constituencies, such as the U.S. Chamber of Commerce, he has shut them out. He pays little attention to familiar Republican think tanks. Instead of deferring to state party leaders, he stepped into the primaries, backed his own candidates (often underdogs), and showed it was fatal for Republicans to oppose him. Back in Washington, the Democrats shut out Trump, deciding from the outset to block as many of his Cabinet and judicial appointments as they could. The result is that Trump firmly controls his own party and is uniformly opposed by Democrats, who are otherwise fractured by ideology and age.

For all his well-earned Pinocchios, Trump has governed exactly as he promised: as an outsider and disrupter. It is hardly surprising to find the losers fighting back hard. They realize Trump’s massive deregulation and his appointment of conservative judges is the most comprehensive effort to roll back the administrative state since it developed under Franklin Roosevelt, expanded under Harry Truman, and flourished under Lyndon Johnson and later.

From Trump’s perspective, impeachment looks like another attempt by deep state actors and their allies in the Democratic Party and media to unseat a duly elected president. That’s how the White House and its allies view the initial counter-intelligence investigation of Trump’s campaign, its morphing into a criminal investigation, and the appointment of Special Counsel Robert Mueller, after leaks by ousted FBI Director James Comey. After two years of deep drilling into a purported “Trump-Russia conspiracy” came up dry, Trump and his supporters want to know how it all got started and why it continued so relentlessly on such thin evidence.