Adam Schiff should be nervous. From Fox News:


Committee Ranking Member Devin Nunes, R-Calif., first told investigative reporter Sara Carter earlier this week that the panel has an “active investigation” into Intelligence Community Inspector General Michael Atkinson.
A source familiar with the committee’s investigation on Tuesday went into further detail, telling Fox News that Republicans are looking at the ICIG’s handling of the whistleblower complaint that sparked the impeachment inquiry into President Trump; the veracity of his testimony about the whistleblower complaint; and the explanations he offered for changes made to the ICIG’s guidance on accepting second-hand information.
In August, Atkinson received a complaint from an individual raising concerns about Trump’s July 25 phone call with Ukrainian President Volodymyr Zelensky in which he pressed Kiev to launch investigations into the dealings of former Vice President Joe Biden and his son Hunter Biden in Ukraine, as well as issues related to the 2016 presidential election.
The president’s request came after millions of dollars in U.S. military aid to Ukraine had been frozen, which Democrats argue shows a “quid pro quo” arrangement. Trump has denied any wrongdoing.
Republicans for weeks have complained that the whistleblower made contact with Intelligence Committee Chairman Adam Schiff’s, D-Calif., staff in advance — though Schiff has downplayed the nature of that contact.
Whether Republicans are looking further into that contact as part of their review is unclear. But since last fall, they have specifically challenged intelligence community officials over changes to a key form that dropped a requirement for “first-hand information” in whistleblower complaints.

Mark Tapscott at ET, Documents Show Senior Kerry Aide Used Private Email to Send Steele Reports to State Department Colleagues. Sure why not. The more the merrier, when they get rounded up for working with the Russians.

“I will send them to her [his assistant, Nina Miller] from my non-State email account, not copying myself,” Winer said in response to a December 2014 email from Paul Jones, principal deputy assistant secretary for European Affairs.

John Sexton at Hot Air, Washington Post Asks Reporters To Explain Their ‘Sunny Remarks’ About The Steele Dossier In Light Of The IG Report


Erik Wemple is now on part 10 of his series of articles about the media’s handling of the Steele Dossier. I’ve had my disagreements with Wemple in the past but the work he’s done on this topic is exemplary. As a conservative who wonders why progressives in the media never get held accountable for things they say that later turn out not to be true, Wemple is doing his level best to restore my faith in the major media with this series.
. . .
Here’s a list of the reporters who didn’t respond to Wemple’s questions (on the record):
It’s interesting how many of these journalists who were part of the pro-dossier chorus on left-leaning networks suddenly have nothing to say about it. To their credit, some of the people who did respond expressed regret or at least admitted to reassessing their past comments:
The reporters defending their prior statements about the dossier included CNN’s Manu Raju, who didn’t defend himself but had a CNN flak do it for him, and MSNBC Nicole Wallace. But the standout has to be Jane Mayer who wrote a lengthy and favorable profile of Steele for the New Yorker in 2018 . . .
. . .
Tenth in a series on the media’s handling of the Steele dossier. Read the rest of the series here.

Mostly, they've reacted to the unpleasant truth they way vampire respond to garlic; avoid it.

Facebook admits the truth, Facebook Exec: Trump Won 2016 Not Because Of Russians But Because Of An Outstanding Digital Campaign

In the Shampeachment, according to WaPoo, Nancy is still holding out; Pelosi says impeachment articles won’t go to Senate until she learns more about how trial would be conducted. Capt. Ed, Hot Air, Pelosi: No Articles For McConnell Until He Explains Himself, Or Something 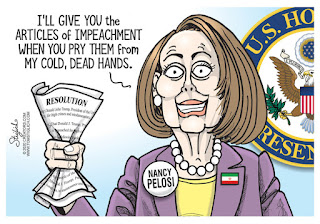 Normally, a briar-patch strategy only works once. Mitch McConnell seems to be getting a whole lotta mileage out of his use of the tactic with Nancy Pelosi. McConnell locked up enough votes to use the 1999 Bill Clinton impeachment-trial rules for the impeachment of Donald Trump and has begun preparations to pass them quickly. Despite this, Pelosi keeps trying to use leverage she just doesn’t have, pledging to keep holding onto the articles until McConnell allows her to approve the process.
. . .
At some point, perhaps a constitutional scholar will explain to the House Speaker that she has no role in setting Senate rules, just as the Senate has no role in setting the House’s. She should be grateful for that; plenty of Senate Republicans objected to the kangaroo court Adam Schiff conducted to produce these articles of impeachment. The objections got so heated that pressure got put on Lindsey Graham to conduct a parallel set of hearings to deconstruct the Schiff Show, which he declined to do.

AP alternate headline,  McConnell says 'no haggling' as impeachment standoff deepens, or as sundance at CTH puts it Mitch McConnell Invites Nancy Pelosi to Sit on a Pinecone: “There will be no haggling with the House over Senate procedure”…

When you've lost Politico, McConnell's win on impeachment trial procedure was months in the making. Jazz Shaw at Hot reports restiveness in the ranks, Pelosi Continues Stalling. It’s Time To Leave Her Behind and  Capt. Ed, NBC, CNN: Senate Dems Getting Tired Of Pelosi’s Delay Tactics, Too


This is all Kabuki theater anyway, but Pelosi’s making that a lot clearer with her bizarre tactics — and making McConnell’s job easier to boot. 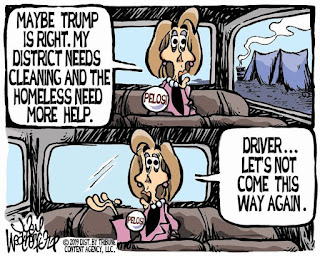 Betsy McCaughey at NYPo, Impeach Trump or get off the pot. But then, there's Sen Pierre Delecto, Senator Romney Throws A Wrench In Senate Impeachment Trial (Paul Goldberg, News Thud). “I would like to be able to hear from John Bolton. What the process is to make that happen, I don’t have an answer for you,” Romney told reporters on Capitol Hill. And Joe Manchin is still pretending to be a Democrat for now, AllahPundit,  Joe Manchin: The Impeachment Trial Will Be A Sham If We Don’t Hear From John Bolton. Breitbart, Adam Schiff Threatens House Subpoena for John Bolton: It’s Not ‘Off the Table’ I would kind of like to hear from Bolton too, but that doesn't mean we should.

At Roll Call, Todd Ruger think Roberts would hold the gavel, but not the power, at Trump impeachment trial. Historically, the CJ's have been pretty hands off during impeachment trials. But, can Roberts resist the temptation to poke Trump?
Posted by Fritz at 8:12 AM