A Serving of Shampeachment, with a Side of Russiagate

A little appetizer of  Russiagate, and a big plate of steaming Shampeachment.

From M. Dowling at the Independent Sentinel ‘Ethical’ James Comey Is Under Criminal Investigation, says NYT, and they're not at all happy about it.

Scott Shackford at Reason, The FBI Wants To Treat Carter Page Warrant Mistakes Like Training Problems. A Court Adviser Says That's Not Enough. Surprisingly sticks up for the David Kris, the Trump hating lawyer from the Obama era the FISA court assigned to oversee the reforms of the FISA process despite his well known baggage.


But Kris has also been skeptical of how the federal government uses surveillance against American citizens and has criticized the National Security Agency's position that laws passed to fight the war on terror and to investigate Al Qaeda permitted the agency to secretly snoop on American citizens. And he voiced these criticisms while working on national security issues at the Justice Department under President George W. Bush.

It appears that version of Kris analyzed the FBI's plans. On Wednesday, he responded that Wray's proposals were ultimately insufficient. Part of the larger problem, which Wray has acknowledged, is that it's hard to check the accuracy of information that's not included or deliberately omitted. In the Page case, much of the erroneous intel that might have dissuaded the judges from granting a warrant was not included in the warrant application, and therefore its accuracy was not assessed.
. . .
After providing a number of similar suggestions, Kris concludes: "The FBI must restore—and the Court should insist it restore—a strong organizational culture of accuracy and completeness." Students of FBI history, meanwhile, can debate whether "accuracy and completeness" have ever been part of its organizational culture.

Some filling in of past events from Sundance at CTH,  DOJ Filing – Former Deputy AG Rod Rosenstein Admits to Authorizing Release of Lisa Page and Peter Strzok Text Messages…, which was interesting, if not shocking. He does, however go on to speculate how it may be tied into the prosecution of the Flynn case:

Obviously those within the DOJ/FBI or IC were able to keep the texts hidden from “the summer” through the end of November…. Then Flynn was forced into the plea… and then suddenly a series of leaks from inside the FBI system started on December 1st, 2017. That chain of events led to congress asking questions and demanding to see them. As a result of those congressional inquires, Rosenstein authorized their release December 12th, 2017.

Speaking of Flynn, a long Twitter thread on  1/ FLYNN WITHDRAWALS PLEA AGREEMENT. Worth reviewing how the case has evolved.

“We knew in 2017 that Michael Flynn did NOT lie to the FBI.” @DevinNunes on .@IngrahamAngle

“Van Grack demanded Flynn lie and he knew exactly what he was doing because he and the [#Mueller] SC edited out key language.” @SidneyPowell1 pic.twitter.com/jVH8ld3eEB
— Gigi Sims (@1GigiSims) January 17, 2020 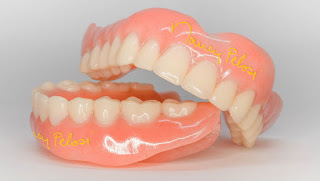 And now, onto Shampeachment! First, from America's finest source of fake parody news, the Babylon Bee, Pelosi Releases Limited-Edition Replica Of Dentures Worn During Trump Impeachment. Dan Sobieski at AmThink writes Pelosi's Pen not Mightier than Trump's Sword. Karen Townsend at Hot Air, Preening Pelosi Trolls Trump On HBO: “You Are Impeached Forever” "Just in case there is any doubt in your mind about the personal vindictiveness of Speaker Pelosi, her appearance on Bill Maher’s HBO show Friday night clarified everything." 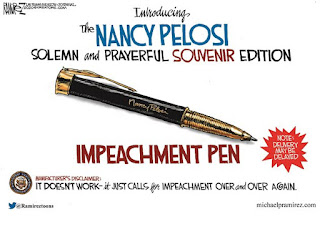 As the outline of the Democratic plan starts to emerge, Byron York at WaEx wonders Can Democrats produce a daily impeachment show? They need better writers; this show has jumped the shark. To wit, Trump backer from Europe says supposed surveillance of Marie Yovanovitch was a joke  "An ardent European supporter of Trump's admitted to having sent supposed details about Yovanovitch's whereabouts that made their way to Lev Parnas, but said it was "ridiculous banter."" WaPoo, Dutch man says texts about Ukrainian ambassador were ‘ridiculous banter’. Remember, the democrats still insist that the anti-Trump texts between Strzok and Page were just ridiculous love banter. Also, Lev Parnas’s bid for Democrats’ star witness Da Beast, Lev Parnas Dishes on Kushner, Maduro, and Soros "They used me". If you don't know who the mark is, you're the mark. Jordaine Carney on Da Hill, Parnas pressure grows on Senate GOP to call him as a witness. Not gonna happen. Doug Ross has a reminder, by way of Nice Deb, Complete List of Journalists and Trump Allies Targeted by Obama's Ukraine Ambassador


The conservative figures allegedly unlawfully monitored by the State Department in Ukraine at the request of Yovanovitch include:

“No wonder both @realDonaldTrump and President Zelensky of Ukraine agreed Ambassador Yonacovitch was a real problem,” President Trump’s personal attorney Rudy Giuliani wrote on Twitter. “I wonder if Shiftless asked her about this? Will there be an investigation or is she another “Protected Person” like Biden & Hillary.”

Progress on the Shampeachment itself?  Da Peacock, House shampeachment managers cite 'overwhelming' evidence against Trump in their brief to Senate "The White House called the impeachment a "dangerous attack on the right of the American people to freely choose their President."" Or in other words, the people chose the wrong guy. And from Da Sun, Donald Trump’s legal team fire off defiant response to impeachment, calling charges ‘brazen & unlawful’, or as the NYT more delicately puts it, Trump’s Defense Team Calls Impeachment Charges ‘Brazen’ as Democrats Make Legal Case. I suppose calling it full of shit is not appropriate. Andy McCarthy at NR, The Hole in the Impeachment Case "Trump Impeachment Trial: Charges Lack an Indictable Offense" Althouse, "The Articles of Impeachment are constitutionally invalid on their face. They fail to allege any crime or violation of law whatever..."

"... let alone 'high Crimes and Misdemeanors,' as required by the Constitution. They are the result of a lawless process that violated basic due process and fundamental fairness. Nothing in these Articles could permit even beginning to consider removing a duly elected President or warrant nullifying the election and subverting the will of the American people."

So reads the second paragraph of the "Answer of President Donald J. Trump" "In Proceedings Before the United States Senate." My link goes to the PDF at the White House website. I couldn't find a text document of the 6-page letter so there's nothing to cut and paste. The White House website does have this text introduction, which, you can see, stresses the politics:


The Articles of Impeachment submitted by House Democrats are a dangerous attack on the right of the American people to freely choose their President. This is a brazen and unlawful attempt to overturn the results of the 2016 election and interfere with the 2020 election—now just months away. The highly partisan and reckless obsession with impeaching the President began the day he was inaugurated and continues to this day.

Other than the word "he," that sounds like something Trump could say at a rally. It's all about the motivations of the House Democrats, which, I'd like to point out, corresponds exactly to the House Democrats' argument against Trump: He/They took the powers of government and used them for personal advantage and only personal advantage. The legitimate, governmental purpose of that power was completely absent. 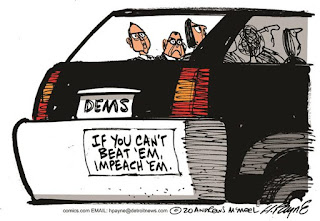 Jonathon Last, one of the boys at the Bulwark goes on about Donald Trump, Impeachment, and the Houston Astros. Meh, another bad analogy. At Fox News, Tom Fitton and Ari Fleischer wonder Should 2020 Democrats recuse themselves from impeachment trial? Sounds good to me! But it won't happen. If the unbiased people were all recused, there would be no one left to decide. Well, maybe Sen. Collins, who loves the fence. AP, Impeachment lands Sen. Collins in familiar spot: crosshairs. More like the limelight, and she loves it.

At Politico comparing Trump impeachment to Clintons, Trump’s impeachment, starring Bill Clinton "Trump is the one fighting to keep his job, but it can feel like the entire country is reliving the last presidential impeachment." It has been about revenge for Clinton's impeachment for a long time. NYPo, Charles Schumer’s 1999 letter about impeachment comes back to bite him

Daniel McCarthy at Spectator USA, You come at the Trump, you best not miss; "Why are the Democrats committing constitutional suicide?" Paywalled, alas, but the easiest workaround works. But David Brooks on PBS thinks  Adam Schiff Will 'Just Walk All Over' Ken Starr, Dershowitz. I dunno; can you imagine listening to Schiff for hours and hours without wanting to scream? Has Brooks ever been right about anything? Is he even allowed to, being the NYT house conservative and all. 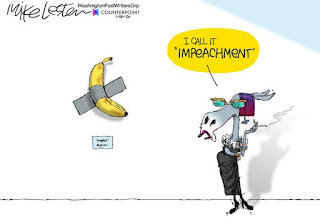 On Da Hill Douglas Mackinnon hopefully speculates, Is Mike Pence preparing to resign, assume the presidency, or both? What does a Scot know; they can't even Brexit properly.

David Harsanyi at NYPo, with regard to Sen. Martha McSally's slap at CNN senior congressional correspondent Manu Raju, CNN’s bias is now beyond laughable. Well yes, but you can always laugh too. Also at NYPo, from Peter Schweizer, How five members of Joe Biden’s family got rich through his connections. Just born lucky. I guess. I mean, Slow Joe is in the family.

At WaEx, 'Take your letter and shove it': Ted Lieu fires back scathing letter in response to Nunes threat


Rep. Ted Lieu told Rep. Devin Nunes’s lawyer to “shove it” after he was threatened with a lawsuit. The California Democrat previously said Nunes, a California Republican, sent him a letter threatening litigation if he did not apologize for accusing Nunes last month of conspiring with Lev Parnas as part of the Ukraine scandal.

On Friday, Lieu shared one page of what he said was the five-page letter threatening a lawsuit, along with his response to Nunes’s lawyer, Steven Biss. The letter from Biss is dated Dec. 31, and Lieu’s response is dated Jan. 16.

In the response, Lieu said that Nunes is “directly implicated” and that “truth is a defense.”

“I welcome any lawsuit from your client and look forward to taking discovery of Congressman Nunes,” he said. “Or, you can take your letter and shove it.”

Nunes recently admitted that he now remembers a phone call with Parnas, who has been indicted on campaign finance charges and worked with President Trump’s personal attorney Rudy Giuliani to dig up dirt on Joe Biden and his son Hunter Biden.

"I remember that call, which was very odd, random, talking about random things," Nunes said Wednesday.