I don't really want to do posts on each of these separately, but these came across the bow, and they seemed pretty interesting. Science marches on (even if I'm not playing).


A team of Italian researchers have strengthened the case that at least the cranium found near Pompeii 100 years ago really does belong to Pliny the Elder, a Roman military leader and polymath who perished while leading a rescue mission following the eruption of Mt. Vesuvius in 79 C.E. However, a jawbone that had been found with the skull evidently belonged to somebody else.

Over the last couple of years the experts, including anthropologists and geneticists, conducted a host of scientific tests on the skull and lower mandible that had been found a century ago on the shore near Pompeii, which have since been at the center of a scholarly debate as to whether they should be attributed to Pliny.
. . .
In a letter to the Roman historian Tacitus, the younger Pliny recounts that his uncle ordered his fleet to set sail for the Vesuvius area, both to investigate the phenomenon and to help “the many people who lived on that beautiful coast."

According to Pliny the Younger, the fleet and its commander disembarked at Stabiae, a town on the shore near Pompeii. But as he was leading a group of survivors to safety, Pliny the Elder was overtaken by a cloud of poisonous gas, and suffocated to death on the beach at age 56.
. . .
So, to sum up this century-old forensic mystery: we have a skull of a high-ranking Roman official who died at the time, place and circumstances in which ancient sources say this occurred; his DNA and skull are compatible with the age and ancestry of the ‘hero of Pompeii.’  . . .

Mysterious particles spewing from Antarctica defy physics. I think they covered this one in Star Gate, the series, you know, the one starring Morena Baccarin. Hint, it was aliens!


Our best model of particle physics is bursting at the seams as it struggles to contain all the weirdness in the universe. Now, it seems more likely than ever that it might pop, thanks to a series of strange events in Antarctica.

The death of this reigning physics paradigm, the Standard Model, has been predicted for decades. There are hints of its problems in the physics we already have. Strange results from laboratory experiments suggest flickers of ghostly new species of neutrinos beyond the three described in the Standard Model. And the universe seems full of dark matter that no particle in the Standard Model can explain.

But recent tantalizing evidence might one day tie those vague strands of data together: Three times since 2016, ultra-high-energy particles have blasted up through the ice of Antarctica, setting off detectors in the Antarctic Impulsive Transient Antenna (ANITA) experiment, a machine dangling from a NASA balloon far above the frozen surface.
. . .
ANITA picks up only the most extreme high-energy neutrinos, Barbano said, and if the upward-flying particles were cosmic-accelerator-boosted neutrinos from the Standard Model — most likely tau neutrinos — then the beam should have come with a shower of lower-energy particles that would have tripped IceCube's lower-energy detectors.

"We looked for events in seven years of IceCube data," Barbano said — events that matched the angle and length of the ANITA detections, which you'd expect to find if there were a significant battery of cosmic neutrino guns out there firing at Earth to produce these up-going particles. But none turned up.

Their results don't completely eliminate the possibility of an accelerator source out there. But they do "severely constrain" the range of possibilities, eliminating all of the most plausible scenarios involving cosmic accelerators and many less-plausible ones.

"The message we want to convey to the public is that a Standard Model astrophysical explanation does not work no matter how you slice it," Barbano said. 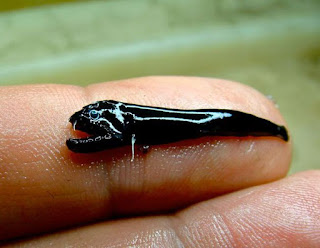 
While on a recent mission to map the sea floor in their new ocean explorer, RV Investigator, researchers with the Commonwealth Scientific and Industrial Research Organisation (CSIRO) made a startling discovery just off the coast from Sydney, Australia: An extinct volcanic range teeming with nightmarish fish, reports CSIRO News.

One of the fish found lurking in this undersea range is the creature pictured above, a tiny, jet black, fanged, scaleless creature. Chief scientist for the voyage, UNSW marine biologist professor Iain Suthers, said he was amazed by how many of these little creatures could be found so far out to sea. The discovery could change how researchers study juvenile fish.

"We had thought fish only developed in coastal estuaries, and that once larvae were swept out to sea, that was end of them," explained Suthers. "But in fact, these eddies are nursery grounds for commercial fisheries along the east coast of Australia."

The features of the sea floor, such as with the underwater volcanic range discovered on this voyage, can create eddies that provide ideal places for life to flourish. The scaleless black fish is not the only strange creature discovered. Also lurking were eel-like idiacanthidae and the ever-frightening chauliodontidae . . .

The science is not settled. And that's a good thing.
Posted by Fritz at 6:53 PM