Hey, remember when (we thought) it really had something to do with Russia? Good Times!


According to sources, the documents already uncovered by Horowitz and the alleged new documents discovered by Durham are significant. Those documents will expose the intent of those involved in the malfeasance at the FBI and the continued operation to spy on Carter Page, a short term Trump campaign volunteer. Further, Durham’s probe is focused on actions of former senior Obama Administration officials that targeted Trump and his team, according to numerous former and current government sources that spoke to SaraACarter.com.

Those being looked into by Durham are former CIA Director John Brennan, fired FBI Director James Comey, fired FBI Deputy Director Andrew McCabe, among others. Durham’s team has already interviewed numerous personnel at the CIA and according to sources “those questioned are very nervous about the direction of Durham’s investigation.”

Durham is looking into the Intelligence Community Assessment on Russia, in which Brennan has stated that the CIA did not use former MI6 spy Christoper Steele’s debunked dossier. Horowitz discovered during his office’s investigation of the FBI FISA review that the uncorroborated dossier was used in obtaining the warrant to spy on Page. Horowitz’s explosive report also revealed that significant information on Page was omitted from the report and that other information was altered by FBI Attorney Kevin Clinesmith. Page had actually assisted the CIA in reporting on Russia – a significant fact that was omitted and changed in the application that was submitted to the secret court.

SaraACarter.com first reported that Durham has expanded his investigation to include the Pentagon’s Office Of Net Assessment, which contracted former FBI informant Stefan Halper, who had contacts with four Trump campaign officials. The Office of Net Assessment awarded Halper multiple contracts that totaled over $1 million dollars. DOJ Inspector General Michael Horowitz’s most recent report described interviews with FBI agents that said it was “serendipitous” that Halper new all the sources of their Crossfire Hurricane investigation. In fact, the report stated that they “couldn’t believe [their] luck” that [Halper] had contacts with three of their four subjects. Those subjects included short term campaign advisors Carter Page and George Papadopolous, as well as Gen Flynn.

Once is happenstance, twice is coincidence, three times is enemy action. Chuck Ross at Da Caller discusses why Rod Rosenstein Approved Release Of Strzok-Page Text Messages, He Tells Court. He wanted to pull the bandage off quick:


“The disclosure obviously would adversely affect public confidence in the FBI, but providing the most egregious messages in one package would avoid the additional harm of prolonged selective disclosures and minimize the appearance of the Department concealing information that was embarrassing to the FBI,” said Rosenstein, who left the Justice Department in May 2019.


Most of the big ‘investigations’ in the news in recent years have not been at all what they pretended to be. The sham investigations of Hillary’s email, or the Clinton Foundation, or Weiner’s laptop, or Uranium One, or Mueller’s witch hunt, or Huber’s big nothing, or the IG’s whitewash, or the Schiff-Pelosi charades, have all been premeditated deceptions. . . .

Shampeachment. Sigh. I guess I should. But by Thursday this will all be irrelevant. Capt. Ed at Hot Air, Gallup: Senate Trial Eve And All’s … Pretty Much The Same. I envy people with the ability to tune this out. He also catches Chris Wallace rolling his eyes as Rep Jeffries says Trust Me, We Took “No Joy” From Our “Solemn” Genuine Souvenir Impeachment Pen Giveaway.

Sundance at CTH presents today's topic for the Senate,  Mitch McConnell Presents Draft Senate Rules Resolution… which, as has been noted Allow For Motion To Dismiss (Tristan Justice, Da Fed). For various reasons, AllahPundit at Hot Air doesn't think that is a very likely path. But I will be disappointed if someone doesn't try. WaPoo worries, When McConnell speaks, Trump listens. Impeachment trial will test the unlikely bond. 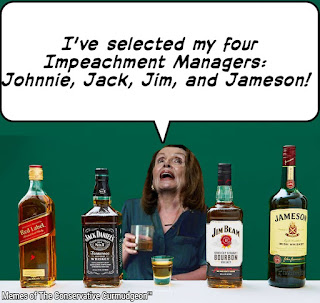 
The Articles of Impeachment now before the Senate are an affront to the Constitution and to our democratic institutions. The Articles themselves—and the rigged process that brought them here—are a brazenly political act by House Democrats that must be rejected.

They debase the grave power of impeachment and disdain the solemn responsibility that power entails. Anyone having the most basic respect for the sovereign will of the American people would shudder at the enormity of casting a vote to impeach a duly elected President.

By contrast, upon tallying their votes, House Democrats jeered until they were scolded into silence by the Speaker. The process that brought the articles here violated every precedent and every principle of fairness followed in impeachment inquiries for more than 150 years.

Even so, all that House Democrats have succeeded in proving is that the President did absolutely nothing wrong. All of this is a dangerous perversion of the Constitution that the Senate should swiftly and roundly condemn.

Capt. Ed cites the  Dersh, Even If All The House Allegations Fit, The Senate Must Acquit, because they haven't alleged anything like a crime. WaPoo lets George Conway try to explain Why Trump had to hire this legal odd couple (Dershowitz and Starr) and Trump’s lawyers, Senate GOP allies work privately to ensure Bolton does not testify publicly and they're not happy about it. I want to hear Bolton, to, but the right of a President to advisers confidentiality is too great. AllahPundit, Poll: 69% Want Senate To Call Witnesses At Impeachment Trial, Including Plurality Of Republicans. Of course, both sides want witnesses that support their side, and to exclude witnesses that argue against it, just like the House did. Axios, Trump legal team to argue calling new witnesses could compromise national security. Democrats used that dodge a lot too, in the Spygate scandal. From Alexander Bolton on Da Hill, Roberts under pressure from both sides in witness fight. I hope he sticks to Rehnquist's Rule "I did very little, and I did it very well."

The WSJ whines about how How Trump Has Kept Near-Unanimous GOP Support Through Impeachment "The unity is the byproduct of a White House charm offensive and the president’s raw political power over his party". But via Wombat-socho's In The Mailbox: 01.20.20. Don Surber diasagrees, Facts The Wall Street Journal Overlooked "They stick mostly because he is getting the job done. . . "

From Red State, A GOP Senator Hits the Nuke Button Over Chuck Todd’s ‘Gotcha’ Question About Obama and Due Process

As if we needed more, Matt Margolis at PJ Media lays out How Joe Biden's Family Got Rich While He Was Vice-President. To be fair, they did it while he was just a Senator too. But a VP has much more influence to peddle.

Da Peacock proclaims Bloomberg says he'd vote to convict Trump if he were a senator. I thought Senators were supposed to be nonbiased, and judge the evidence presented. But thanks for playing anyway. 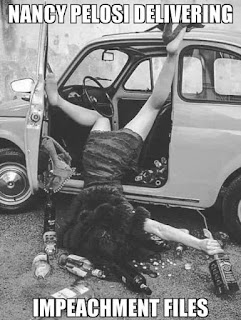 
. . . "So a bunch of Democrats all got together and agreed that Trump is icky. And that's about it. It's like those nude protests against the Iraq War, or even better, this Saturday's women's march.

"You *did* know that there was a women's march on Saturday, right?

"OK, so there was a women's march this Saturday in Washington DC where a bunch of silly women got together shrieking about how they all thought that Trump is icky, and waving silly signs. And I think a bunch of other left-wing protestors showed up, too. Because that's usually what happens. Most left-wing protests have a problem with focus.

"But I digress. What, exactly, did waving silly signs and shrieking about Trump being icky accomplish? Pretty much zero. You know, like the impeachment."