A Full Basket of Shampeachments

Lets do Biden and Ukraine crap first. AP, 'Bogus' Ukraine theory led to Trump's abuse, Dems tell trial. Democrats pretty much think (with good reason, the press supports them) that they can just declare evidence of Democrat wrongdoing off limits by declaring it "bogus" or a "conspiracy theory" or often a "bogus conspiracy theory." From sundance at CTH, Lee Zeldin Challenges Media and Debunks Schiff’s Claim that Ukraine 2016 Interference is “Conspiracy Theory”…

Capt. Ed at Hot Air wonders  Hmmm: Did Schiff Open The Door To Biden Subpoenas? and cites a WaPo Columnist: Let’s Face It, Fellow Dems, Hunter Biden Has To Testify I think so.


And the fake "whistleblower," Eric Ciaramella, checked the Ukranian officials into the White House?

Politico reporter Ken Vogel contacted the White House for comment on a story he was working on. It's this email that has just been revealed.


Even the most innocuous explanation, that Burisma wanted the Biden name attached to the company as a matter of pure prestige rather than as a conduit to the White House, is a form of petty corruption. Hunter was trading on dad’s public office for personal gain, as so many ruling-class spawn do.


Mark Moore, NYPo, Rudy Giuliani threatens to go public with Biden corruption allegations. Are they holding it for an October surprise? And Monica Showalter at AmThink thinks Will an Arkansas stripper finally shut down the Schiff show? 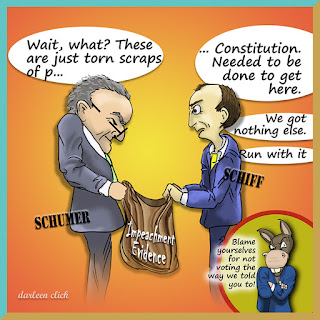 AllahPundit has Jonathan Turley: Jerry Nadler Made A “Major Blunder” By Accusing Senate Republicans Of Engaging In A Cover-Up, and Capt. Ed reports Murkowski: “Very Offended” Over Nadler’s “Cover-Up” Accusation, well he only called you a traitor. Ace, Backfire: Frequent Defector Lisa Murkowski Says She Was "Offended" By Obese Jerry Nadler's Claim That Anyone Voting Against Their Demanded Rules-Changes Was Engaged in a "Cover Up" Not playing well with his target audience, presuming he really wants a conviction, instead of just dirtying Trump for the 2020 race. Murkowski also wonders Why Are House Managers Pushing Us Into A Legal Battle They Refused?

Buzzfeed, "It's Liberating!": Senators Love Being Freed From Their Phones For Trump’s Impeachment Trial, and Justin Carusoe at Da Caller, Republican Senators Are Literally Playing With Kids’ Toys During The Impeachment Trial. Ace, Washington Post Columnist: The Democrat Case for Impeachment Is Kind of a Huge Joke, Isn't It? Think of it more as a malicious practical joke. Bulwark Boy Benjamin Parker sadly wonders Does This Impeachment Trial Matter? Matthew Walther at Da Week, The Senate impeachment trial is a real snoozefest

AllahPundit reports that Rand Paul says I Estimate We Have 45 Republicans Ready To Support A Motion To Dismiss, but it takes 51. Another day of "funemployment" for the Senators may do it, but Capt Ed reports President's lawyer, Sekulow: Dismissal? We Don’t Need A Stinkin’ Dismissal, not before they get 3 day to trash Biden and Schiff, anyway. "“I want to let them try their case, and we want to try our case because we believe without a question the president will be acquitted,” he told reporters. “There is not a doubt."

Can I get a witness? Althouse, "The Democrat House would not give us lawyers, or not one witness, but now demand that the Republican Senate produce the witnesses that the House never sought, or even asked for?" "They had their chance, but pretended to rush. Most unfair & corrupt hearing in Congressional history!"/"No matter what you give to the Radical Left, Do Nothing Democrats, it will never be enough!" "Trump tweets this morning."  Tobias Hoonhout at NR, ‘I Think It’s Off the Table’: Schumer Shoots Down Possibility of Bolton-for-Biden Witness Swap. So no Bolton? Well, they didn't really know what he was going to say anyway. AllahPundit, Dem Senator: The Witness We Really Want To Call Isn’t Bolton. It’s Mulvaney.  A reliable Democrat mouthpiece Politico echos Mick Mulvaney becomes top Democratic impeachment target.  Paul Savoy at the Atlantic whines An Impeachment Trial Without Witnesses Would Be Unconstitutional. Looking for an excuse to nullify the acquittal. But, via sundance, Elise Stefanik – Improperly Constructed House Articles are No Excuse for New Senate Witnesses…

Karl Rove wonders Would Democrats Impeach Obama? (WSJ via Hot Air). I believe this is the quintessential example of the rhetorical question. Liz Vaughn at Red State on how Rep. Meadows Noticed House Dem’s Frequent References to Gordon Sondland’s Testimony; They Should ALL be Asked this Question "Why are you using the testimony of someone who admitted he had zero evidence, other than his own “presumption?”" Because it's all they have. Bulwark Boy Thomas Firey dolefully asks Are Democrats Getting the Trial They Want? Mark Steyn has a simple observation, Objection: Sad!


This is a joke. I gave up on it when, on the eve of the trial, the laughably named "Government Accountability Office" released its supposedly entirely separate conclusion that Trump had acted "illegally". Aside from the fact that that "finding" is flat out wrong, I wonder whether the permanent bureaucracy ever thinks, "Gee, maybe we should be a little more subtle about putting our Deep State thumbs on the scale."

When you've lost Stacry Abrams, NR, Stacey Abrams Urges Fellow Dems to ‘Stop Re-Litigating Past Elections’ But they're not just re-litigating the last election, they're preparing the battle space for the next one.

Ace watches TV so you don't have to, Former Clinton "War Room" Propagandist and Current Member of the Fake Media George Stephanoplous Caught Frantically Giving "Kill" Gesture, Telling Producer to Cut Trump's Lawyer Off and Keep Him Off the Air. What's the over/under on the major networks going back to soaps for the Presidents 3 days of defense, also, Former Clinton WH Spokesman and Current CNN "Analyst:" Okay I Just Flat-Out Lied About Overhearing GOP Senators Talking About How Great the Democrats' Case Was, But That's Okay Because It Was "A Joke" and Also You're All Liars

D.C. Swamp Tales has Trey Gowdy Went On Fox News and Had All Hell Breaking Loose With One Secret


Gowdy then went on to explain the true meaning of impeachment.
The former South Carolina Congressman stated that Democrats pursuing impeachment meant that they were waving the white flag of surrender in the Presidential election.

Gowdy went on to reveal that the Democrats’ true goal was to use impeachment to damage swing state Republican Senators running for re-election so Chuck Schumer could seize power.

“There is no mathematical way he’s ever going to be convicted and they know that,” Gowdy said. “So their goal cannot be to remove Donald Trump from office. It is to neuter his second term.”

Gowdy warned that a Democrat Senate would grind Trump’s second term to a halt.

Democrats could reject all cabinet appointments and block all Trump judicial nominees for years in hopes a Democrat wins the 2024 election.