Shampeachment, The Beginning of the End 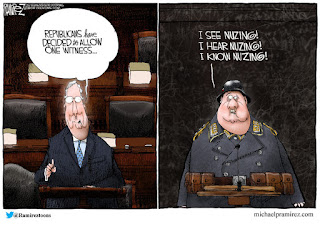 Proving Ace wrong, with the announcement that GOP Sen. Lamar Alexander, a key impeachment swing vote, says he will vote against witnesses (the Peacock), it seems like it's all over but the shouting. Which will go on forever, anyway.  They'll vote for no witness, McConnell or somebody will move to vote on the articles, and the impeachment will go down in an almost party line vote (there may be a dissenter or two on either side). Paula Bolyard, PJ Media, Key GOP Senator Announces Impeachment Witness Vote. Game Over? Stacy McCain, Collins Announces ‘Yes,’ Alexander ‘No’ on Calling Impeachment Witnesses: TIE?, and a tie is the same as no, unless Justice Roberts decides to flex his muscle; and I doubt he will.  Althouse, "Senator Lamar Alexander, Republican of Tennessee, said late Thursday that although he believed that Democrats had proved their case that President Trump acted 'inappropriately' in his dealings with Ukraine..."

"... he did not think the president’s actions were impeachable and would vote against considering new evidence in the impeachment trial. Mr. Alexander’s statement was a strong indication that Republicans had lined up the votes to block a call for more witnesses and documents on Friday and press toward a quick acquittal in the third presidential impeachment trial in history.... 'The question then is not whether the president did it, but whether the United States Senate or the American people should decide what to do about what he did,' Mr. Alexander said... 'I believe that the Constitution provides that the people should make that decision in the presidential election that begins in Iowa on Monday.'...

I worked with other senators to make sure that we have the right to ask for more documents and witnesses, but there is no need for more evidence to prove something that has already been proven and that does not meet the U.S. Constitution’s high bar for an impeachable offense.1/15
— Sen. Lamar Alexander (@SenAlexander) January 31, 2020 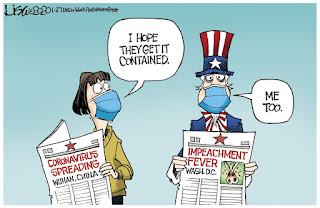 And with that, I'll skip back to Russiagate et al. By the time I get back, it may be done. Another take on Flynn attempting to reverse his guilty plea (it's not done until the judge allows it) from Chuck Ross at Da Caller, Michael Flynn: ‘I Regret Pleading Guilty’ and from Victoria Taft at PJ Media, Feds Back Off Jailing Michael Flynn After Stunning New Evidence That Gov't 'Lied' and 'Framed' Him.

Filed under lawsuits I hope will succeed, Ex-Trump aide Carter Page files suit against DNC over dossier: ‘This is only the first salvo’

The suit goes on to allege the parties named “misrepresented Dr. Page’s connections to and interactions with certain foreign nationals in order to create the false impression that Dr. Page —a law-abiding American citizen who served his country honorably in the United States Navy and in the private sector—was in fact an agent of a foreign power, Russia.”

The suit states: “Defendants leveraged these fabrications within the Federal Bureau of Investigation (‘FBI’) and the United States Department of Justice (‘DOJ’), leading these agencies to present false applications to the Foreign Intelligence Surveillance Court (‘FISC’).” 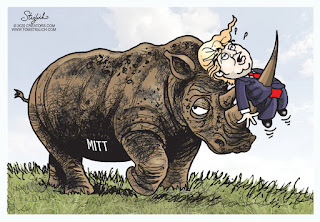 Bonchie at Red State, House Impeachment Manager Is Asked About the Steele Dossier and His Response Is Unbelievable


Asked whether, under the Dems' impeachment standard, the Clinton campaign's solicitation of the Steele dossier would be considered foreign interference, illegal, or impeachable, @RepJeffries says no -- because the Steele dossier "was purchased."

Given Chief Justice John Roberts' censorship of a senator in the discharge of the senator's duties, the following question must now be posed on the floor: In the event a chief justice were impeached for abuse of power and obstruction of Congress, who would preside over his trial?
— Sean Davis (@seanmdav) January 30, 2020

John Roberts did nothing while the FISA court which he personally oversees illegally spied on an American citizen. He did nothing when DOJ determined the court was defrauded.

But when a senator asked a question? Roberts shut that down. Twice. What a disgraceful coward.
— Sean Davis (@seanmdav) January 30, 2020

Stacy McCain, Eric Ciaramella’s Name Is Not a Secret, and #TeamTrump Only Hires Winners


This is the “Streisand Effect” in action — by pretending that we have to treat Eric Ciaramella’s name like it’s top-secret classified information, Tapper and other Democrat operatives in the media have inadvertently made everyone curious to know the identity of the “whistleblower.”

But CJ Roberts did read a closely related question, that got to the heart of the issue, and didn't mention Eric Ciaramella by name. Via the Wombat's In The Mailbox: 01.30.20, Legal Insurrection: Roberts Rejects Rand Paul’s Question Again Because It supposedly Names The “Whistleblower”, American Greatness: Chief Justice Roberts Blocks Question From Sen. Paul About Ciaramella, Allows Question About Schiff Staffer. Nick Arama, Red State, Chief Justice Roberts Reads Ciaramella/Misko Question About Threat to ‘Take Out the President,’ Schiff’s Response Says Everything

Question asked about former NSC staff Sean Misko saying to the alleged Whistleblower “We need to do everything we can to take out the President” at an NSC meeting.

“Why did your committee hire Sean Misko the day after the phone call between President Trump and Zelensky?” pic.twitter.com/46F3N6FcwH
— Benny (@bennyjohnson) January 30, 2020

Which prompted an angry response from Schiff. Tyler O'Neil at PJ Media, Schiff Throws Tantrum Over His Staff Getting 'Smeared' by Reports on the 'Whistleblower'. Well, he didn't exactly kick his feet or bang his head, but his eyes bulged more, which I didn't think was possible. Capt. Ed Hot Air VIP, Question Time Drama: Will The Senate Force Roberts Out Of The Process Over The Whistleblower?, Not unless he inserts himself into the witness question, while the AP wonders Gavel time: Will chief justice expand his impeachment role? John Sexton at Hot Air, Warren: Does This Trial Contribute To Loss Of Faith In The Chief Justice And The Constitution?. He did a good job of playing cool, but Althouse detected signs of frustration in An elegant vignette — the classic humility of the judge.


Watching the Chief Justice a second time, I was able to see a subtle expression of feeling. If an actor could do this I'd be impressed. There's a pause at the point where he sees the disrespect in the question (as he's saying "witnesses"). There's a determination to simply move through it. When he's done, he puts the paper down with a slight throwing motion. He continues to look down and his lips are tight and almost frowning


also, Senator Rand Paul Discusses Importance Impeachment Origination – Was This Planned Months/Years in Advance?… The outline of the plot was planned, the actual triggering event, the phone call, was opportunistic. Capt Ed. again, Trump Attorney: Did Whistleblower Have His Own Connection To Biden Quid Pro Quo? If it's Eric Ciaramella, why, yes he did.

re-upping Nov 11, 2019 tweet on Jan 19, 2016 meeting with Ukrainians hosted by Ciaramella, at which Ukrainians were told of linkage of IMF $1 billion to demand that Shokin be fired. Ukrainians at meeting also released Black Ledger against Manafort to aid Hillary. https://t.co/as7gnIMxfj
— Stephen McIntyre (@ClimateAudit) January 23, 2020


“If the whistleblower, as is alleged in some public reports, actually did work for then-Vice President Biden on Ukraine issues, exactly what was his role? What was his involvement when issues were raised — we know from testimony that questions were raised — about the potential conflict of interest that the vice president then had when his son was sitting on the board of Burisma,” Philbin asked. “Was the alleged whistleblower involved in any of that and in making decisions to not do anything related to that?” …

“Did he have some reason to want to put the deep-six on any question raising any issue about what went on with the Bidens and Burisma and firing Shokin and withholding a billion dollars in loan guarantees and enforcing a very explicit quid pro quo — you won’t get this billion dollars until you fire him?” Philbin asked, pointedly.

“We don’t know, and because Manager Schiff was guiding this whole process — because he was chairman in charge of directing the inquiry and directing it away from any of those questions — that creates a real due process defect in the record,” the president’s lawyer declared. 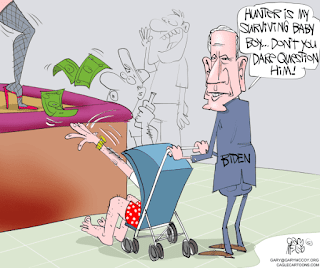 The Boys at the Bulwark have given up the pretense of conservatism, Who’s Afraid of Joe Biden? "Why is a Republican senator from Florida running attack ads against Biden in Iowa?" Why not? 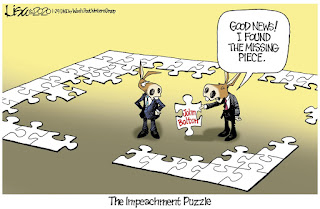 A bit on Bolton, in case he is still relevant. Politico sadly reports ‘I’ve had it take years’: Bolton’s book could be tied up past November. Yeah, we waited years for Fast and Furious information. Capt Ed, Bolton Lawyer To NSC: Finish Your Review Of Book Immediately So Bolton Can Testify. WaPoo, Bolton’s lawyer contends his book does not contain classified material and asks White House for expedited review so he can testify if called, Yeah, sure. Also from Capt. Ed, Stop Claiming Bolton Video Proves Him A Liar, Says … Fox & Friends?

Brian Kilmeade: "I don't like the idea of people making John Bolton out to be a liar. He's sat on this couch before. He's not a liar." pic.twitter.com/nowrpE6ul3
— Bobby Lewis (@revrrlewis) January 30, 2020 Now, back to Shampeachment. Since it's all going to be moot today or tomorrow, I'll just dump this here:

Martha McSally: “I have heard enough. It is time to vote.” – HotAir 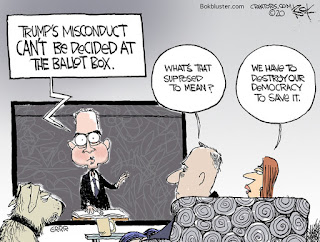 Ace of Spades HQ RCP: Trump's Job Approval Now At Its Highest Level Since the Second Month of His Presidency Plus: Impeachment Update, and the Left Reasserts Its Pagan-Gods-Granted Right to Control What the Proletariat May Safely Say

We really should give the democrats a little credit...they’ve got thru 9 days of “The Pledge of Allegiance” without taking a knee
— Sean Spicier (@sean_spicier) January 30, 2020 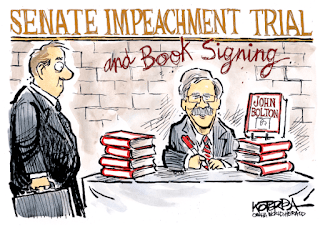 How impeachment could flip the Senate – HotAir

Schiff floats "compromise": How about we have just a single week of witness depositions? 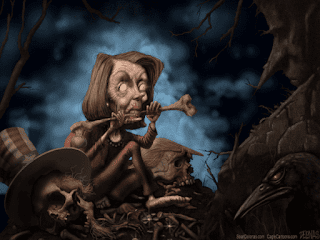 “He will not be acquitted”: Trump can't be vindicated unless witnesses are called, say Pelosi and Schiff

John Brennan: Cancel the State of the Union, blames impeachment

Rand Paul rips foreign aid recipients: Most ‘are crooks and have stolen it’