Are You Busy Tomorrow? 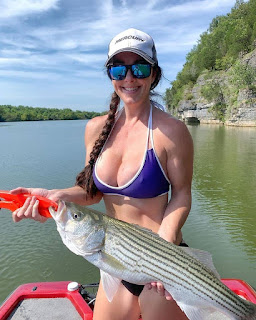 Tomorrow, MD DNR is holding a public hearing for input on a set of proposed changes for Striped Bass Regulations to address the "crisis."


n Thursday, January 9, the Maryland Department of Natural Resources (DNR) will hold a public hearing on striped bass (better known as rockfish) management for recreational anglers during the 2020 season. The hearing will take place at 6:00 p.m. at the Calvary United Methodist Church, 301 Rowe Blvd, Annapolis.

Because scientists for the Atlantic States Marine Fisheries Commission (ASMFC) have determined that the entire stock of Atlantic stripers is being overfished, the Commission’s thirteen member states (including Maryland, Virginia, and the Potomac River Fisheries Commission) have voted that each must reduce the total removals within its jurisdiction. The clear aim of the reductions is to reduce pressure on this highly-prized species throughout its range from North Carolina to Maine and allow the fish to replenish themselves. 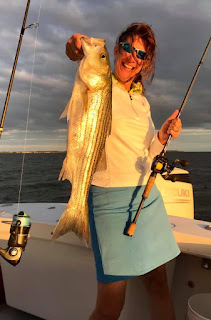 “Total removals” includes not only fishing harvest but “dead discards”, or fish that have died after being caught and released by both recreational anglers and commercial watermen. According to ASMFC’s 2018 benchmark stock assessment, the shocking truth is that the greatest rockfish mortality, coastwide, was from recreational catch-and-release, followed by recreational harvest and then smaller total commercial removals. The statistic has caused much soul-searching within the recreational and charter communities, and much of the concern in the Chesapeake falls on catch-and-release angling in warm water, when these fish become stressed quickly if handled.

Virginia and the Potomac River Fisheries Commission are already working on their plans (Bay Bulletin will keep you posted on them). Maryland has determined that recreational anglers, on both private and charter boats, will have to reduce their removals by at least 20.6 percent from 2017 levels. Accordingly, DNR has developed four options on which it will seek public comment at the January 9 hearing to help its decision-making. You can study those options here. 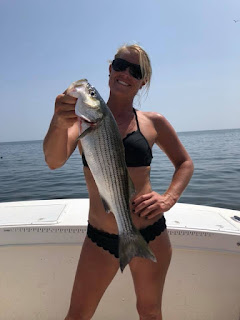 Each scenario includes a package of catch reductions adding up to 20.6- 20.8 percent, including measures like delaying the start of the spring trophy season to avoid stressing large female rockfish headed to their upriver spawning grounds, closing some of the summer season when heat stress is highest, changing size and bag limits, and ending the season a week or two earlier than the past December 15 closure. ASMFC’s Striped Bass Technical Committee of fishery scientists will scrutinize every state’s plan, and there will be much discussion of them at the Commission’s 2020 Winter Meeting, February 4-6 in Arlington, Virginia.

Anglers will have more opportunities to comment afterward, but all three of the Chesapeake’s ASMFC jurisdictions will move as quickly as possible to give the fishing community time to prepare for the season. One thing is clear: the 2020 striped bass season is going to look different on the Chesapeake.

From MD DNR, a summary of the four options being considered (with the rationale): 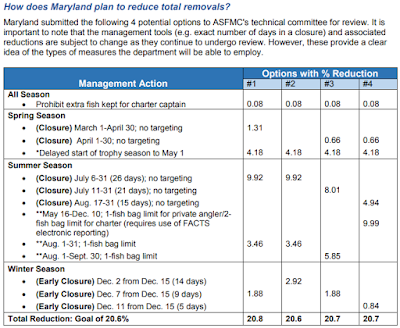 The spring closure options would most affect me; to save a hypothetical 1.31%, they propose to cut off catch and release fishing in the spring, before the official season. I don't believe the number, but in any event it is a minor part of the proposed reductions, added largely at the insistence of commercial fishermen. The summer season restrictions are probably the most important; stripers do in fact, suffer high mortality from summer catch and release fishing. But there are other fish present at those times, Blue Fish, Red Drum, and Sea Trout, which you target in similar ways, so identifying and enforcing rules against targeting is somewhat problematic.

The charter boat captain one is just funny. For 0.08%, less than a rounding error, they stop the captain from keeping an extra fish "for the boat" which usually ends up being split among the clients.