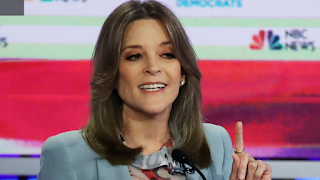 As Stacy McCain notes, A Dark Day for Democracy


Jan. 10, 2020, will forever be known as Black Friday — a day that will live in infamy — when the Democratic Party lost its last hope:


Author Marianne Williamson ended her 2020 Democratic presidential campaign on Friday after failing to gain traction in a crowded Democratic field.
“I stayed in the race to take advantage of every possible opportunity to share our message. With caucuses and primaries now about to begin, however, we will not be able to garner enough votes in the election to elevate our conversation any more than it is now,” Williamson wrote in a message to supporters.
“The primaries might be tightly contested among the top contenders, and I don’t want to get in the way of a progressive candidate winning any of them,” Williamson continued. 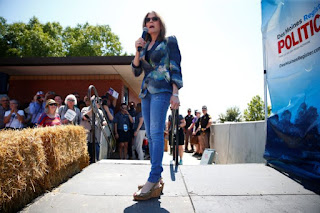 Williamson pledged to fully support the Democratic nominee.
Williamson had not qualified for the Democratic debate next week. The spiritual author had laid off her campaign staff nationally, a former staffer confirmed to CNN last week.
After launching her campaign in January 2019, Williamson told CNN she was running to bring a “moral and spiritual awakening” for America.
“Nothing short of that is adequate to fundamentally change the patterns of our political dysfunction,” Williamson told CNN’s John Berman at the time.
Williamson’s campaign has been little-noticed in recent months, as focus shifted to the Democratic contenders who were meeting the party’s fundraising and polling thresholds to qualify for debates and Williamson repeatedly missed the cut.

Linked by EBL in Julie London: June in January, Prohibition Babes,  Free Trade Trends: Will Booth Babes Be Back in 2020? 🇺🇸🇮🇷🇨🇦🇨🇳👯‍♀️🤔🤷🏻‍♀️,  Jessie Buckley, Itzy: Icy, Eat More Chicken Feet 🐔🍜🇨🇳🇺🇸, National Championship: There can only be one 🏈🐯🐯 Update: LSU wins 42-25  and Go Big or Go Home! Wombat-socho has Rule 5 Monday: Stacey Dash up and waiting.