Getting Down to Russiagate and Shampeachment

I suppose I must, at least as long as the coffee holds out.

First, via the Wombat's In The Mailbox: 01.24.20, EBL wonders about Obama Administration's Fraudulent FISA Warrants? How is this not a bigger news story? 👨‍⚖️. I think that's a rhetorical title question. Sundance at CTH provides an example of why, CNN Journalist Who Pushed Original Dossier Story Now Covers Invalid FISA Application That Relied on Dossier…. It's just like the past never happened!

Greg Re at Fox reports how Dem impeachment witness Vindman unloads on Blackburn as Dems wrap 3rd day of Trump's trial. Wrapped himself in the flag, as you might expect. Elizabeth Vaughn at Red State, If Eric Ciaramella is the ‘Whistleblower’, Then He, IG Michael Atkinson and Adam Schiff Must Be Questioned Under Oath Right Away. Yep, count me among the people who want witnesses; just maybe not the witness Democrats demand.

More amusement from Avenatti from the Tax Prof Blog, Michael Avenatti Arrested By IRS Agents, Accused Of Committing More Financial Crimes While Out On Bail. Hey, remember when CNN was touting him as a Democrat presidential candidate? Why not, at least he's openly a crooked lawyer.


"I thought he was doing fine with moral courage until he got to the head on a pike. That's where he lost me ... he's a good orator," said the Alaska Republican, whose vote is crucial in the Democrat’s push to subpoena new witnesses and documents in the trial. "You've got to give him that. And he was moving right along with good oratory ... it was just unnecessary." 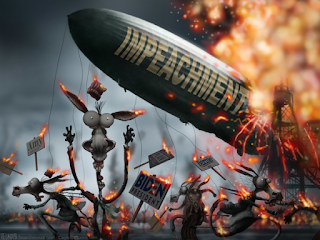 Alhouse, I need to get up to speed on the "head on a pike" story.


I'm trying to read "Schiff refers to CBS 'head on pike' story, infuriating GOP: 'Every one of us knows it is not true'" (Fox News), "Schiff sparks blowback with head on a 'pike' line" (The Hill), "GOP senators incensed by Schiff’s ‘head on a pike’ remark" (AP).

Did Adam Schiff make up another quote?!


Rep. Zeldin reacted to Schiff’s comment by tweeting that Schiff isn’t helping his cause by making such remarks:


“Adam Schiff kicks off Day 3 of the Senate impeachment trial threatening Senators with imprisonment. Not sure what he’s worse at: reading his audience or telling jokes. Either way he is not helping his cause.”

As for Nadler, ‘Stunned’ Sen. Collins objected to Nadler’s impeachment accusation in note to Roberts. “I took it as offensive,” she told reporters Wednesday. “As one who is listening attentively and working hard to get a fair process, I was offended.” I don't think that helps win her vote on witnesses. Matthew Continenti at the WaFreeBee, Nadler’s Folly, Impeachment's target audience isn't moderate Republicans. It's left-wing Democrats.  Via Insty

Would a “dictator” allow himself to be impeached on grounds he finds scurrilous. Trump has routinely been subverted and undermined by his own subordinates. This is so moronic. https://t.co/pr8CiANFjj
— Michael Tracey (@mtracey) January 25, 2020

Ace, Lisa Murkowski: Why are the Democrat House Managers Demanding That We Go Through the Hassle of Calling Witnesses Whom They Themselves Refused to Call?, and Joni Ernst: I'm Tired of Liberal House Mangers Lecturing Us About the Ukraine When Four of Them Repeatedly Voted Against Providing Ukraine with Lethal Aid. Yep.

1. "More than circumstantial evidence" of collusion
2. Nunes memo was false
3. FISA process was fine
4. The "Whistleblower" would testify
5. "We haven't spoken... with the 'Whistleblower'"
6. Parodied @POTUS' call
7. "Mr. Z" referred to Zelensky

But today we're supposed to trust him?

Bob Fredericks at NYPo, Trump impeachment: Democrats push obstruction charge in last day of arguments. Generally agreed to be a bullshit charge. From Tyler O'Neil at PJ Media, Jonathan Turley: Dems Have to Scrap Half of Impeachment to Have a Prayer at Getting Witnesses. He proposes to trade a dismissal of the Obstruction of Congress charge for witness for the Abuse of Power charge. CNN liberal hack Manu Raju, Senate GOP uses Trump's executive privilege threat as rallying cry against subpoenas. At Roll Call, Executive privilege standoff could roil Trump impeachment trial timeline. 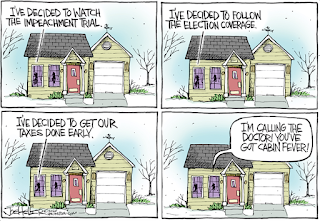 Evidence that the public is tuning out? NYPo, Trump impeachment: Half-empty spectator gallery puzzles senators, but at least some people are taking it seriously, Ace, Man Chokes His Girlfriend When She Complains That She's Tired of Watching the Impeachment Trial; Another Man Murders His Pro-Trump Boss, and AllahPundit sadly reports ABC/WaPo: Trump Climbs To Highest Job Approval Rating Of His Presidency Amid Impeachment Trial "Impeachment is just … there. Not really good for him, not really bad. It’s just sort of what’s on TV this week." Althouse catches WaPoo shading the truth in "President Trump’s approval rating has climbed to match the highest of his presidency, boosted by majority approval of his economic stewardship..."  Meanwhile, the AP whines Study links impeachment beliefs to regular news diets, prescribing a stiff dose of MSNBC for conservatives. 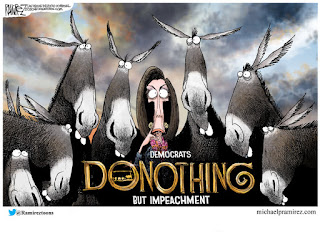 McClatchy whines Hardball tactics from his classic playbook: On impeachment, McConnell ‘plays to win’ How dare Republicans not roll over and die for us! And at the Atlantic, The Democrats Are Letting Roberts Off Too Easily "By doing nothing to ensure that Trump’s trial gets at the truth, the chief justice is taking a side. And the Democrats are just watching him do it." He's doing nothing and doing it well, just like his mentor, CJ Rehnquist.

Politico writes about What Republicans want to hear from Trump's lawyers.


"The president’s team ... has never presented its case since it did not do so in the House,” said Sen. Susan Collins (R-Maine), a key swing vote. “Unlike the House managers, who partially presented when the motions were being debated, the president’s attorneys chose not to do that. It’s not finished yet ... so it’s difficult to judge."

Senate Majority Whip John Thune (R-S.D.) said he hopes Trump’s team will present a "fact-based" defense that counters the Democrats' case. “I assume at some point they're going to feature [Alan] Dershowitz and Ken Starr, people like that and talk about impeachment in the broader context of what that threshold is,” he said.

Gaining bonus points for brevity? Althouse, "President Trump's team is considering using just a portion of the 24 hours they're given for arguments in his impeachment trial...."


A truncated defense would likely reflect a decision not to contest facts or defend Trump point by point, but rather to try to diminish the legitimacy of Democrats' overall case and end the trial as quickly as possible.How many "points" are there? Seems to me — and I'm listening to precious little of the proceedings — that the Democrats have been repeating themselves quite a bit.

A former TV star, the Donald is exquisitely sensitive to how and whem things are portrayed on TV.

After having been treated unbelievably unfairly in the House, and then having to endure hour after hour of lies, fraud & deception by Shifty Schiff, Cryin’ Chuck Schumer & their crew, looks like my lawyers will be forced to start on Saturday, which is called Death Valley in T.V.
— Donald J. Trump (@realDonaldTrump) January 24, 2020

Could that have been part of the Democrat plan? They're evil, not stupid. Insty, SPOILER: IT WON’T BE.

What do you think the second term Trump impeachment will be for? I sure hope it’s more exciting and better concocted than this one.
— Mollie (@MZHemingway) January 24, 2020 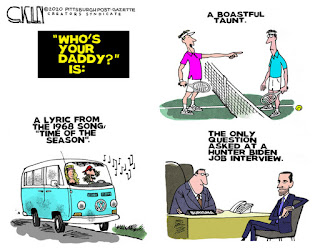 Matt Margolis, PJ Media, Biden Still in Denial, Says 'No One Has Suggested My Son Did Anything Wrong'. In fact, I agree, Hunter didn't do anything wrong by taking free money; Joe did something wrong by taking charge of Ukraine policy, and demanding the prosecutor be fired. If it was clear Biden wouldn't act on his behalf, Burisma wouldn't have hired Hunter.

Sundance, Rudy Giuliani: “I Won’t Stand By and Watch”….

Democrats are wetting their panties as ABC reports 'Take her out': Recording appears to capture Trump at private dinner saying he wants Ukraine ambassador fired. Of course, it wasn't until 14 months later she was dismissed. And they say he's impulsive.

Mike Pompeo has a spat with a reporter over Ukraine coverage: “Do You Think Americans Care About Ukraine?”

NPR's Mary Louise Kelly says the following happened after the interview in which she asked some tough questions to Secretary of State Mike Pompeo. pic.twitter.com/cRTb71fZvX
— Daniel Dale (@ddale8) January 24, 2020