Russiagate on a Snowy Morning

Well, not really snow, but more like light sleet, and not very thick.

Sundance has an interview with Gen. Michael Flynn's lawyer Sidney Powell, where she talks about their request to have his guilty plea and confession to lying to FBI agents rescinded. Sidney Powell Interview With Larry O’Conner: “We Have a Witness To The Original Flynn 302″… It's well worth the 15 minutes. I couldn't figure out how to embed it. Ryan Saavedra at  Da Wire got the news, Feds Investigating Comey Over Leak Tied To Hillary Investigation, Report Says and at Da Caller, ‘Comey Choked Like A Dog’: Trump Praises Chuck Grassley For Hammering Former FBI Director. Good.

Sundance also presents The IG Report Documentary: “FISA and Spying on Team Trump” – OAN Broadcast 7:00pm ET Tonight….. Missed it, but there's a preview on YouTube. I'm sure it will show up eventually. Meanwhile, GOP Lawmakers Press Spy Court For Answers About Ex-DOJ Official Picked To Monitor FBI Reforms (Chuck Ross, Da Caller). It probably won't do any good, but it need to get on the record before he starts covering up more crimes.


“If the FISC’s goal is to hold the FBI accountable for its serious misconduct, Mr. Kris does not appear to be an objective — or likely effective — amicus curiae for several reasons,” Rep. Jim Jordan and Mark Meadows wrote to Judge James Boasberg, who presides over the FISC, in a letter obtained by the Daily Caller News Foundation.

“At minimum, the selection of Mr. Kris creates a perception that he is too personally invested on the side of the FBI to ensure it effectuates meaningful reform.”

Also, from Capt. Ed, Hot Air, House Republicans To FISA Court: When Will You Penalize Attorneys Who Misled You On Carter Page Warrants? It's a cold day, but not that cold. George Parry at AmSpec, The Potemkin Court "Is the FISC a façade attempting to hide the U.S. government’s surveillance powers?" Absolutely.


It seems to me that Kris’ appointment provides a moment of clarity for which all of us should be grateful. It has publicly and unambiguously confirmed what many of us have long believed: that the FISC is and for decades has been a façade, a pretend court posing as an independent judicial check on the government’s exercise of its enormous powers of electronic surveillance.

However well-intentioned by those who enacted FISA, the FISC over time has evolved into a meaningless rubber-stamp appendage to the surveillance state. For example, as reported by the Justice Department, in 2018, out of the 1,117 FISA applications submitted by the government, the FISC approved 1,079. The lopsided ratios of approvals to denials are similar for every year of the FISC’s operations.

From News Thud, John Brennan Apologizes For Lying To USA And Saying Trump Wrote Ritz-Carlton Note, but not the rest of his many lies.

An obvious but uncomfortable truth. To be sure, a lot of fixtures on the news did NOT peddle the Russia hoax. But those that did haven’t confessed and there are still platforms available to the complicit. Part of the problem is the marks still want to believe it was true. https://t.co/EOZLeDffWf
— Hugh Hewitt (@hughhewitt) January 17, 2020 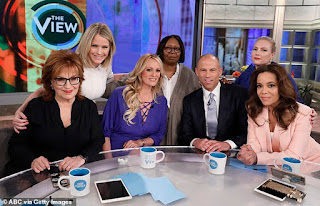 Red State, Avenatti Arrest Warrant Shows Quite the Knack for Living Large. He's clearly got a screw loose.  DaMail, 'Take off that legal note... I'm not interested!' Megan McCain explodes at producer on The View for displaying a correction after the host said Michael Avenatti 'is going to jail' when he's actually being held on remand, and yet, he's in jail.


Joy Behar cut in to say the notice was needed because Avenatti has pleaded not guilty and hasn't been to trial yet. He's simply being held ahead of his trial.

'He has pled not guilty so we don’t know if he’s going to jail for a very long time,' host Sunny Hostin added.

In Shampeachment, there are new additions to the Presidents defense, Capt. Ed, Dream Team? Trump Adds Starr, Dershowitz, And Ray To His Senate Impeachment Defense. Althouse "Kenneth W. Starr and Alan Dershowitz to join Trump’s legal team." "WaPo reports. . . And for the first the first time, I'm picturing myself watching the big trial and not avoiding it."Sundance, has Trey Gowdy Discussing the Impeachment Trial – President Trump Adds Ken Starr and Alan Dershowitz to Defense Team… and Alan Dershowitz Discusses His Role During President Trump Impeachment Trial… AllahPundit, Dershowitz: Please Don’t Call Me A Full-Fledged Member Of Trump’s Defense Team. Well, he was a Clinton voter, who supports Trump on legal issues, because he thinks it's correct legally. On the other hand, Mediaite points out that Trump’s New Lawyer (Starr) Panned President’s ‘Poor Judgment’ on Impeachment, Said Testimony Against Him ‘Doesn’t Look Good’ and from CNN, Lewinsky offers colorful remark in apparent response to Starr joining Trump defense team, Heh!

Jordain Carney on Da Hill, GOP threatens to weaponize impeachment witnesses amid standoff, the Red Meanies. Teach in Pirates Cove, GOP Is Threatening To Weaponize Impeachment Witnesses Or Something  AllahPundit, Lefty Pundit: Hunter Biden’s Going To Have To Take One For The Team If Calling Him At Trial Means We Get To Call Bolton And Mulvaney. Capt. Ed on ABC: Isn’t It Curious How Frank Biden Got Rich?

Pengate? At the Independent Sentinel, McConnell’s brilliant statement on Nancy’s “golden pens on silver platters” “Nothing says seriousness and sobriety like handing out souvenirs,”   Mitch McConnell Appears To Troll Nancy Pelosi With A Single Pen, and I'll bet it didn't look like a rifle cartridge.

Bill Livingston at AmThink, Impeachment Is Not the Issue, It's the 2020 Election. Thanks, Mr. Obvious.

BPR, Greg Gutfeld rips Dems like never before over impeachment circus: ‘They don’t hate Trump, they hate you!’ I saw it live. Worth the time. Charles Sykes, on of the boys at the Bulwark, Republicans Now Own Impeachment. Behind the WSJ paywall, Peggy Noonan finds Impeachment Moves Forward to Nowhere. AllahPundit, Senate GOP Eyeing “Aggressive” Trial Timetable That Could See Trump Acquitted Within Two Weeks. Fox, Mark Levin slams Democratic hypocrisy on Trump impeachment, warns Republican 'weak links' against voting for witnesses. Or what; you'll yell at them? M. Dowling at the Independent Sentinel, Rand Paul Will Expose Every Republican Who Joins with Democrats


“Paul says if four or more of his GOP colleagues join with Democrats to entertain new witness testimony, he will make the Senate vote on subpoenaing the president’s preferred witnesses, including Hunter Biden and the whistleblower who revealed the Ukraine scandal — polarizing picks who moderate Republicans aren’t eager to call. So he has a simple message for his party: end the trial before witnesses are called,” Politico reports.


A trial cannot be fairly conducted if a defendant is still under active investigation for the same alleged corrupt transactions, particularly when prosecutors are publicizing new evidence and new findings. That patently prejudices the trial court’s consideration of the formal charges that have been transmitted to the court.

In just the last 48 hours, congressional Democrats have raised the specter that the president and his underlings (said to be acting with his knowledge and approval) conducted surveillance of a U.S. ambassador they believed to be an obstacle to their campaign to pressure Ukraine into investigating the Bidens; and did not merely undermine U.S. policy but actually violated U.S. law by delaying congressional aid.

Simultaneously, House Democrats are coordinating with Senate Democrats to orchestrate calls to expand the Senate’s imminent impeachment trial to explore any new allegations and witnesses that arise out of continuing investigations of the president, even though these allegations are not covered by the two articles of impeachment voted last month.

I’ll repeat the point I made in Wednesday night’s column: Legitimate trial courts do not allow themselves to be abused this way. The Senate should not put up with it.

It's pretty clear the Democrats intentions are to raise one issue after another, however ill-founded and weak, every day or two, until Trump leave office in 2024, to call his legitimacy into question, and to hinder his actions, Weasel Zippers, Pelosi On Impeachment Witnesses: “It’s Not A Question” Of “Proof” It’s About “Allegations”, Wait, what?  Which bring us to Democrats attack of the week, Lev Parnas, who has the charm of Michael Cohen, the avariciousness of Michael Avenatti, and reputation for honesty of Christine Blasey Ford, which is good enough for Politico, Parnas and Ukraine aid bombshells jolt impeachment trial, AllahPundit, Parnas: Trump Knew Everything That Was Going On With Ukraine And It Was All About Defeating Biden, Not Corruption "Conveniently, he said exactly what House Democrats and Rachel Maddow were desperate to hear." Da Beast, Lev Parnas Reveals Why He Turned on Trumpworld. Chuck Ross at Da Caller, Lev Parnas’s Comments To New York Times Conflict With CNN Report About ‘Secret Mission’ For Trump. He's told many conflicting stories. AllahPundit, Robert Hyde: I Was Climbing Volcanoes In Ecuador When I Sent Those Texts About Surveilling Yovanovitch To Lev Parnas. Eddie Scarry at WaEx, Lev Parnas isn't a 'bombshell' in the impeachment case. He's stalling on his way to prison

From Da Hill, John Kruzel posits that the Trump trial poses toughest test yet for Roberts. Doing least is best.  Not on the verdict itself, I think, but "History shows Chief Justice John Roberts could cast tie-breaking votes at Trump's impeachment trial "Analysis: The chief justice has offered no clues about how he would approach the question of witnesses, but judges typically rule in favor of allowing relevant testimony."" I'll bet he'd rather wrestle a rabid raccoon.

And last, at Aces, the Morning Rant  Gorilla says,


"So it looks like the shampeachment is a go. If I were Cocaine Mitch, I would insist on a few things first, namely, that since senators Michael Bennet, Amy Klobuchar, Bernie Sanders, and Elizabeth Warren all have a yuuge conflict of interest in impeachment since they're running for the office that they're trying to oust Donald Trump from, they will be recused from the proceedings forthwith. I would make this a non-negotiable condition.

"And since the Democrats are still running options out of the Kavanaugh playbook, the Republicans need to be on guard for any last-minute tomfoolery or some surprise witness nobody's ever heard of before that they'll pull out of their ass after the game clock has expired. They know they can't win in a fair, fact-based trial, so they're going to drag this out as long as possible and turn it into the biggest clown show they possibly can.

"This is what I would do now. For the future, I would insist on impeachment rule changes, namely, that impeachment vote must be bipartisan. That is, the Senate will not accept any impeachment vote from the House where there is not at least X percent of the votes from one of the parties, say 10 percent, or 25 percent, or whatever. Because, otherwise, impeachment is just a partisan clown show with commemorative pens, celebrity selfies, and balloons and pony rides for the kids. You know, kind of like this one."