Well, we knew something like this was coming, but it still pisses me off. Axios, Prosecutors recommend Michael Flynn serve up to 6 months in prison


Federal prosecutors recommended in a sentencing memo Tuesday that President Trump's former national security adviser Michael Flynn receive a sentence of zero to six months in prison, arguing that he should not receive credit for cooperating after his new legal team attempted to dismiss his charges and accused the government of misconduct.


The irony here is the DOJ used the threat of FARA charges to compel the guilty plea. The DOJ then went after Flynn’s former partner Bijan Rafiekian on those exact FARA charges Flynn plead guilty to avoid. Mr. Rafiekian’s sketchy DOJ conviction was overturned and the indictment against him dismissed in September by a federal judge who said there was insufficient evidence to sustain the case.

Hopefully Judge Sullivan will see through the persecutions pique and do the right thing, but if not, Trump should pardon him forthwith.

Margot Cleveland is back at work at Da Fed with 3 Times The IG Report Suggests Spygate Is Worse Than We Thought. It would be hard for it to be worse than I think. I think it was an attempted bloodless coupe by our intelligence agencies. The only thing that could be worse is dead bodies turning up in conjunction with it. But read it anyway. Lorraine Silvetz at Liberty Nation, Flub Or Felony: 17 FISA Errors Submitted Four Times? IIRC, not all the "errors" were committed in the first application; some of them consisted of not verifying suppositions from the first in subsequent submissions. The point still stands. Like John Belushi's character in the Blues Brothers, he was on a mission from God, 'Duty as a citizen': Bruce Ohr concealed efforts to spread Steele dossier, from Rowan Scarborough at WaEx. The weird thing is that he's still on the job, albeit demoted.

“The idea that he actually had some role in this Russia investigation was shocking to me,” Mr. Rosenstein later told the inspector general. “We had been fending off these congressional inquiries. And they were asking for all sorts of stuff, 302s [FBI reports] and things, and … I had no idea that somebody on my staff had actually been involved in … an operational way in the investigation.”

From the Last Tradition, Bill Still: Comey Blames Brennan – Brennan Blames Comey. So hard to tell; both are liars and deserve to be in jail.


He's a hack and a goof and a partisan shill, and he's not willing to criticize the Washington Post as acting as the rec.gov.treason.coup messageboard of #TheResistance, but he is at least willing to attack his employer's competitors.

Lee Smith has a podcast on Dark to Light that's worth the time.

What do they all have in common?

And speaking of poor Hunter, WaEx claims Investigator says Hunter Biden used identity of dead brother Beau to hide location. Why not, he took his dead brother's wife, too. 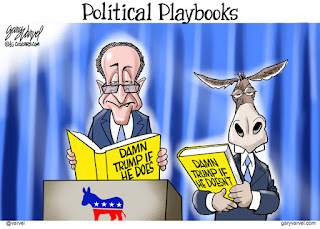 In Shampeachment news, from Capt. Ed at Hot Air, The Hill: McConnell’s Got The Votes To Dictate Senate Trial Rules


And he got them from Susan Collins and Lisa Murkowski. Despite the bombshell from John Bolton, Mitch McConnell pledged not to budge from his position that the Senate should adopt the same rules package that got 100 votes in 1999 for Bill Clinton’s impeachment trial. Thanks to the simple majority requirement for setting the rules, Chuck Schumer and Nancy Pelosi can’t force him to do otherwise . . .


This didn’t take long, did it? Almost as soon as Mitch McConnell got past the 51st vote to use the rules from Bill Clinton’s impeachment trial for Donald Trump’s, he moved to seal the victory . . .

And at the enemies camp, WaPoo, McConnell, Pelosi dig in over trial rules, "McConnell says he’s ready to begin Trump impeachment trial with no deal on witnesses"


Under the majority leader’s plan, a decision on whether to call witnesses would be made once that first phase of the trial is over — a move announced Tuesday to put the pressure back on Pelosi amid simmering frustration from GOP senators over the speaker’s delay in sending the articles.

That echoes the format of former president Clinton’s trial 21 years ago, and McConnell has been able to persuade his members that Trump should be treated in the same fashion as Clinton.

Asked if he could guarantee witnesses will be called, McConnell said that matter would be discussed after the Senate votes to proceed — not before.

“The way it works, at the risk of being redundant, is that 51 senators determine what we do, and there will be, I’m sure, an intense discussion . . . about the whole witness issue,” McConnell said. “The people calling the witnesses won’t necessarily be us; it will be the prosecution or the defense.”

Althouse  cites Turley, "In a conventional trial, [Hunter] Biden would be a relevant defense witness."


Biden’s testimony would have bearing on a key question in an abuse-of-power trial. Trump insists that he raised the issue of Hunter Biden’s relationship with a Ukrainian energy firm to the Ukrainian president as part of an overall concern he had about ongoing corruption in that country. If that contract with the son of a former vice president could be shown to be a corrupt scheme to advance the interests of a foreign company or country, it might be Trump’s best defense. Trump’s position is that he did not arbitrarily ask a country to investigate a possible political rival. Had Trump called for an investigation into Sen. Elizabeth Warren’s (D-Mass.) husband, for example, without a scintilla of proof of corruption, it would be entirely indefensible.... Schumer knows that neither Biden nor his contract will show well under the glare of a public impeachment trial... The worse that Hunter Biden looks, the better Trump looks in raising the contract. That is the problem with asking for witnesses in a Senate trial...."

From "Chuck Schumer wants witnesses. Hunter Biden could be a disaster" by Jonathan Turley (WaPo).

At News Thud, Schiff Mocked After Claiming Pelosi Holding Articles So Trump Can Get a “Fair” Trial. As well he should be.

Via the Wombat's In The Mailbox: 01.07.20, Volokh Conspiracy: Sen. Hawley Introduces Resolution To Dismiss Approved (But Not Transmitted) Articles Of Impeachment and  At the Federalist Papers, Republican Senators Introduce Resolution To Dismiss Articles of Impeachment If Pelosi Does Not Send Them. 51 votes, baby. Via Hot Air, Harold Koh at NYT whines Why Aren’t All The President’s Men Testifying? Maybe they should have called more witnesses at the House?

At PJ Media, Michael van der Galien catches Mark Levin in Full Righteous Anger Mode: 'Senate Must Declare Impeachment Articles Null and Void' Does he have any other mode?

Wombat-socho has Rule Five Sunday: Texans Cheerleaders and FMJRA 2.0: It’s No Game ready and waiting your digital pleasure.
Posted by Fritz at 8:49 AM