In 2019, more fresh water flowed into the Chesapeake Bay than it has in any of the past 82 years. The average freshwater streamflow into the Bay over the past year was 130,750 cubic feet per second—the highest since data collection began in 1937. To put this into perspective, 130,750 cubic feet is about 978,077 gallons. In comparison, an average Olympic-sized swimming pool holds approximately 660,253 gallons of water. That’s more than one pool entering the Bay every second!

These historic flows, which followed the record-breaking rainfall seen in 2018, caused Bay-wide changes in salinity. The extreme rainfall also washed nutrient and sediment pollution into the Bay, which depleted dissolved oxygen that aquatic species depend on for survival, and dramatically impacted the Bay’s underwater grass habitat and other living resources. 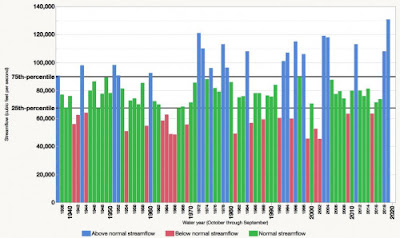 Hmm. That's interesting, since 2009 until now, 20 year, we've had 5 years below normal and 5 years above. Sound's like things are going on about normal.


However, the extreme amounts of rain that led to these heavy flows of freshwater between 2018 and 2019 dramatically impacted salinity levels throughout the entire Bay. Beginning in May 2018, salinity levels in the middle of the Chesapeake Bay were below-average, a situation which persisted for 17 consecutive months. A record-low level of salinity was observed in February 2019 in this area, and the months that followed continued to hover near record-low levels.

As of October 2019, waters in the lower Bay have returned to their normal salinity levels. However, the months of high flows has dramatically impacted plant and animal life in these regions. This has impacted the habitat for spawning fish, the distribution of underwater grasses and oysters, and increased the presence of Dermo and MSX, which are oyster-killing parasites.


After a promising year, underwater grasses have taken a step back . . .

Which, other than crabs improving, are all sort of what you'd expect from an exceptionally wet year.  One of these years soon, we'll have a drought, and then they'll be complaining about all the bad things droughts cause, too
Posted by Fritz at 7:37 PM