The gang's all here.


NBC described the Mueller team leader as a "legendary prosecutor" -- which he is actually, but not in a good way.
Andrew Weissmann is a former Justice Department official who is known for engaging in ruthless and unethical behavior in several high-profile cases. Gen. Michael Flynn's attorney Sidney Powell, in fact, made him the lead villain in her book "Licensed to Lie" and has labeled him "the poster boy for prosecutorial misconduct." 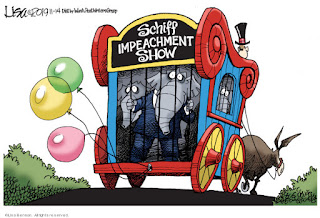 Rabbi Fischer at AmSpec on  The Great Gift of the Mueller Russian-Collusion Probe "Crying wolf far too long, again and again, gives today’s hearing no standing at all." And Daniel Greenfield at Front Page, End the War on Trump, Abolish the National Security Council "We can have free elections or the NSC." In general, I'm favor of trimming the tree of government to make it more productive and less intrusive and this might be a good branch to prune.


The NSC doesn’t answer to Congress. Its members are meant to advise the president. (Except when they’re actually working for a previous president.) They command the implements of foreign policy, traditionally the weakest element in domestic politics, but not when they start treating their domestic political opponents as agents of a foreign state. And the size of the NSC has gotten out of control.

Under Obama, the NSC staff hit 400 people. That’s up from a dozen during its Cold War origins. And it’s the staff that’s the problem.

The NSC was born in the Truman era, not as a byzantine government bureaucracy full of endless departments and hundreds of staffers, but as a means for key foreign policy and national defense figures to coordinate, develop options and then present them to the President of the United States. People like Vindman or Fiona Hill were never supposed to be there.

And in the Department of Where are They Now, Legal Insurrection reports that  Michael Avenatti Gets Two Conspiracy Charges Dropped, Feds Add Fraud Charge, while Althouse notes that even the Jeopardy champions don't remember who he is anymore in "His name — quickly forgotten, obviously — Michael Avenatti."

From Jack Shafer at Politico? The Press Should Name the Whistleblower. You mean actually do their jobs? 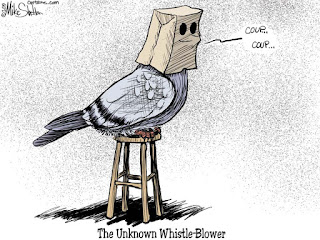 
“Ambassador Sondland did not tell us, and certainly did not tell me, about a connection between the assistance and the investigations,” Prystaiko said, according to Reuters. “You should ask him.”

CNS News, Rep. Ratcliffe: To Impeach Trump, Dems Have to Call Zelensky a Liar. No problem.

Tyler O'Neil at PJ Media, Jim Jordan Explains Why Trump Held Up the Money to Ukraine Without a Quid Pro Quo


"There was a delay on sending hard-earned tax dollars of the American people to Ukraine," Jordan admitted. "We’re not talking any country, we’re talking Ukraine. Ernst & Young said one of the three most corrupt countries on the planet. … So our president said, 'Time out. Time out, let’s check out this new guy. Let’s see if Zelensky’s the real deal. This new guy who got elected in April, whose party took power in July. Let’s see if he’s legitimate.'"

Jordan continued, "Now, keep in mind, in 2018 President Trump had already done more for Ukraine than Obama did. That’s right, President Trump — who doesn’t like foreign aid, who wanted European countries to do more, who knew how corrupt Ukraine was — did more than Obama because he gave them Javelins, tank-busting Javelins to fight the Russians. Our witnesses have said this, others have said this: 'Obama gave them blankets, Trump gave them missiles.' But when it came time to check out this new guy, President Trump said, 'Let’s just see, let’s just see if he’s legit.'"

"So for 55 days, we checked him out. President Zelensky had five interactions with senior U.S. officials in that timeframe. One was, of course, the phone call, the July 25 phone call," the congressman explained. "And there were four other face-to-face meetings with other senior U.S. officials. And guess what, in not one of those interactions — not one — were security assistance dollars linked to investigating Burisma or Biden."

So what happened during those 55 days? "U.S. senators, Ambassador [John] Bolton, Vice President Pence, all became convinced that Zelensky was, in fact, worth the risk. He was, in fact, legit and the real deal and a real change. And guess what? They told the president, 'He’s a reformer, release the money.' And that’s exactly what President Trump did."


During Wednesday's impeachment hearings, Steve Castor, House Intelligence Committee counsel for the minority, asked Ambassador Taylor a rather simple question about Hunter Biden and his position at Burisma, that he couldn't (or perhaps refused) to answer, resulting in perhaps the most awkward silence I've ever seen in such a hearing. . .

Julie Kelly at AmGreat, Impeachment Inquiry Is Bad . . . for Biden. The fact that Biden is still nominally the front runner for the Democrat nomination says a lot about how much Democrats actually care about corruption. Also, from CNS News, Nunes: DNC Staffer Worked with Ukraine to Dig Up Dirt on Trump During 2016 Election

Althouse, "Ambassador Taylor was correct that what the U.S. had been doing in Ukraine comported with the Trump National Security Strategy of resisting persistent aggressions by Russia and China."


From "The Take Down Trump Project" by Daniel Henninger (MSN.com link, originally in the WSJ). Henninger suspects voters will blame Democrats for wasting a congressional term pursuing Trump instead of legislating in some beneficial way.

Henninger doesn't talk about this, but I think voters may see the Democrats as doing something close to what they're accusing Trump of doing — using governmental power for personal political gain. If they succeed in making us anxious and outraged about Trump, we'll also feel anxious and outraged about them. What do you do with that feeling? Turn away from politics? Take note of human nature, shrug it off, and keep playing, at least enough to cast a vote? 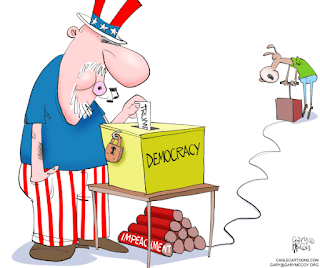 I'm not going to go through impeachment links individually but you'll see that I've sorted them roughly into related groups:

Will Senate Republicans demand -- or oppose -- a long impeachment trial?

McConnell On Dismissal Of Trump Impeachment Articles: ‘We’ll Have To Have A Trial’ | The Daily Caller

Althouse: "That might be a strategy. But I’ll leave that up to others. I’m just a lowly worker."

Turley, Starr: House Dems not making a case for impeachment so far -- or even a crime 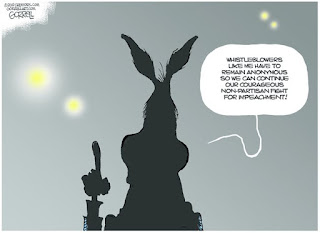 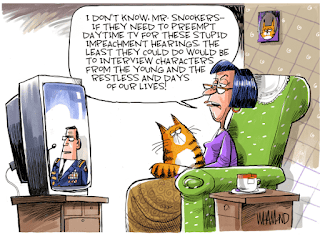 Pelosi: Let's face it, what Trump did with Ukraine is bribery

This Impeachment Inquiry Is Really About Who Sets U.S. Foreign Policy

Ace of Spades HQ The President, Not Stuffed Shirt Paper-Pushers in the Federal Bureaucracy, Is Invested With the Foreign Policy Power by the Constitution

Advice for Trump: Ignore impeachment and do the job you were hired to do, says ... Bill Clinton

No, Rudy didn't say that he has "insurance" in case Trump tries to fire him

Politics Is About Getting The Last Word : The Other McCain