Russiagate: A Hill to Die On

Continuing with a double or triple stuffed Russiagate sandwich. Yesterday was the David Holmes and Fiona Hill testimony. Both Holmes, Ukrainian Embassy couselor, and Hill, touted as the White House Russia expert, were clearly unhappy with Trump's treatment of the State Dept and his foreign policy direction regarding Ukraine. As he testified previously in the secret House sessions, Holmes reported overhearing both sides of a Sonerland/Trump phone call in a noisy restaurant. Capt Ed at Hot Air, Holmes: I Heard Trump Ask Sondland About “The Investigation” … And A$AP Rocky

Adam Schiff finally has some direct testimony on the record in his public impeachment hearing, but it’s not exactly a gamebreaker or even a surprise. Almost alone among all of the other witnesses that have appeared before the House Intelligence Committee, Ukraine embassy counselor David Holmes testified to his direct knowledge of something Donald Trump said in Ukraine-Gate. It’s the same testimony that Holmes provided in his earlier deposition, however, and it’s not at all conclusive of any sort of quid pro quo . . .

CNN, Holmes recalls Sondland saying "Rudy f---s everything up". Rudy messes up the Deep Staters plans? A point in his favor, and from sundance at CTH, this Epic Fail – Fredo Takes Trump Challenge on Live TV – Embarrasses Self and Media… as Fredo Cuomo tried to prove it was possible to overhear both sides of the conversation.


Hill noted that President Obama had ignored the “interagency consensus” for what she called “political” reasons. She explained that Obama was concerned that arming the Ukrainians could provoke the Russians. 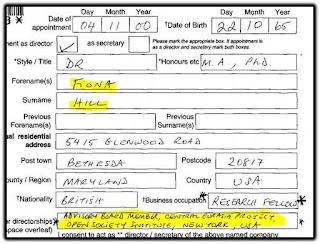 Despite her manifest hostility to Donald Trump, according to  Da Caller,  Fiona Hill said Russians Could Have ‘Played’ Christopher Steele and Fiona Hill Confirms Ukraine Was Currying Favor With Hillary Clinton In 2016. At AmThink Tom Trinko claims Fiona Hill Testifies that Obama Was Putin's Puppet. I think that's an overstatement. Rushbo, Fiona Hill Undermines Multiple Democrat Premises.  Ann Althouse cites Andy McCarthy "[Fiona] Hill conflated two separate theories of Ukrainian collusion in the 2016 election. One of these is discredited, the other is quite viable."


"Hill helped the Democrats suggest that they have both been debunked.... ... President Trump is largely to blame for propagating the discredited Ukraine theory. It holds that, somehow, it was Ukraine, rather than Russia, that interfered in the 2016 election by cyber-espionage against Democratic email accounts.... The second theory has nothing to do with Russia. It is supported by significant evidence. It includes public professions of support for Clinton and opposition to Trump by Ukrainian officials. It includes acknowledgments by Ukrainian investigators that their Obama administration counterparts encouraged them to investigate Trump campaign chairman Paul Manafort. Bolstering this theory is the fact that Ukrainian officials leaked information damaging to Manafort (a ledger of payments, possibly fabricated) that forced Manafort’s ouster from the Trump campaign, triggering waves of negative publicity for the campaign. A Ukrainian court, in late 2018, concluded that two Ukrainian officials meddled in the election. And in 2018 House testimony, Nellie Ohr — who worked for Fusion GPS, the Clinton campaign opposition research firm that produced the lurid and discredited Steele dossier — conceded that a pro-Clinton Ukrainian legislator was a Fusion informant. When Republicans and most Trump supporters refer to evidence of Ukrainian collusion in the 2016 election, it is this collusion theory that they are speaking about. This theory is in no way mutually exclusive with the finding that Russia hacked the DNC accounts — it has nothing to do with the hacking." - Writes Andrew McCarthy (in the NY Post).

It's hard for any of us to keep this stuff all straight.

This was CNN's chyron an hour ago, before they reported that an FBI official is under investigation for altering documents in the Russia probe. Great job guys! pic.twitter.com/z21MA87Ck2
— Chuck Ross (@ChuckRossDC) November 21, 2019

Reaching back all the way to Sondland's testimoy on Wednesday, Joseph Klein at Front Page says Ambassador Sondland Blows Holes in Democrats’ Impeachment Narrative "Presumes a quid pro quo -- but proves the opposite." At Da Wire, Rep Mike Turner Gets Witness To Admit Bombshell, Debunks CNN Headline In Real Time. Saw that video yesterday. At CNS News, Jordan to Sondland on Quid Pro Quo: ‘It’s Not 2 Plus 2 – It’s 0 for 3’ 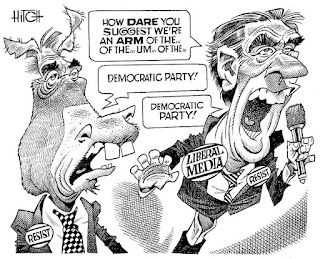 This for that, right? Looks to me like Ukraine got that three times, and there was no this. We didn't do anything. Excuse me, they didn't have to do anything. I've never seen anything like this, and this is--. When the call came out, you all remember when the call came out, everyone said we are going to -- quid pro quo. That was in the call, and of course, of course that didn't happen, that didn't happen. Remember with the complaint said? Remember what the memo said of the whistle-blower. This call was frightening. This call was scary, all those things. None of them materialized. None of that materialized. I yield back.

Tyler O'Neil at PJ Media, Fake News: AP, CNN, NYT Twist Sondland Testimony on Ukraine. I'm sure the list is much longer than that. But Michael Goodwin at NYPo says  Dems finally got something they can use for impeachment


Granted, it’s not much, for the gift came with a huge caveat. Sondland’s key testimony, regarding a quid pro quo, provides ammunition to both sides and there are contradictions and weaknesses that undermine Dem efforts to make it decisive.

Most importantly, Sondland repeated his recollection that Trump explicitly told him he wanted no quid pro quo from Ukraine. This is a powerful piece of exculpatory evidence, which is why Trump repeated it Wednesday as he left the White House.

The day’s big events started when Sondland, the ambassador to the European Union, insisted that the president set up strict conditions for meeting the new Ukrainian president. The ambassador told lawmakers that President Volodymyr Zelensky would get an Oval Office visit only when he publicly promised to investigate Ukrainian meddling in the 2016 election and Burisma, the corrupt energy company that put Hunter Biden on its board for at least $50,000 a month while his father, Joe Biden, was vice president.

Schiff has been desperate to get something like this, and he broke down the testimony in an effort to portray it as a high crime and misdemeanor. He said Trump, in asking Ukraine for the investigations, was demanding “a thing of value” in exchange “for an official act,” the White House meeting.

There’s more than one rub here. Is America going to support removing a duly elected president over failing to hold a meeting? Aren’t there almost always demands made in exchange for foreign aid? Isn’t that an extremely weak excuse for imposing the political death penalty? 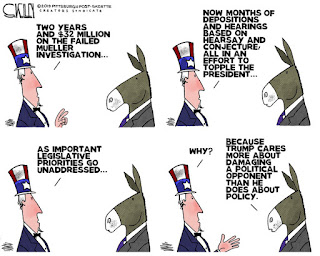 CR, Giuliani claims US embassy under William Taylor is blocking visas of Ukrainians who ‘could come here and blow up Schiff’s completely fraudulent investigation’. I would not be surprised.

John Solomon writes, Responding to Lt. Col. Vindman about my Ukraine columns … with the facts


. . . I want to exercise my right to debate Lt. Col. Vindman about the testimony he gave about me. You see, under oath to Congress, he asserted all the factual elements in my columns at The Hill about Ukraine were false, except maybe my grammar. Here are his exact words:

“I think all the key elements were false,” Vindman testified.

Rep. Lee Zeldin, R-N.Y, pressed him about what he meant. “Just so I understand what you mean when you say key elements, are you referring to everything John Solomon stated or just some of it?”

“All the elements that I just laid out for you. The criticisms of corruption were false…. Were there more items in there, frankly, congressman? I don’t recall. I haven’t looked at the article in quite some time, but you know, his grammar might have been right.”

Such testimony has been injurious to my reputation, one earned during 30 years of impactful reporting for news organizations that included The Associated Press, The Washington Post, The Washington Times and The Daily Beast/Newsweek.

And so Lt. Col. Vindman, here are the 28 primary factual elements in my Ukraine columns, complete with attribution and links to sourcing. Please tell me which, if any, was factually wrong. . . . 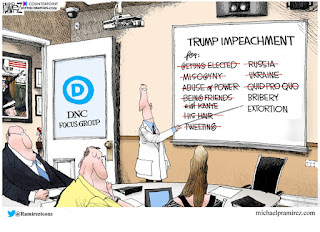 Read the whole thing.  Also from John Solomon, The Ukraine scandal timeline Democrats and their media allies don’t want America to see. Yeah. Read that too. And Ukrainian to US prosecutors: Why don't you want our evidence on Democrats?

Hunter Biden-linked company received $130M in special federal loans while Joe Biden was vice president, Ace, Another of Hunter Biden's Paymasters Received $130 Million In Special Federal Loans While Pop-Pop Was Vice President "Oh." Adam Mill at AmGreat asks Will Joe Biden Take the Fifth in a Senate Trial?. I confidently predict he won't be called. He should, but he won't. At Red State, Rep. Devin Nunes: We Will Subpoena Hunter Biden and the Whistleblower. Good luck with that.
Alana Goodman, WaEx,

The Battleswarm Blog, Dispatches from the Ukraine Corruption Investigation, on the investigation opened up on Burisma "Well, this seems like kind of a big story. . ."while sundance at CTH  thinks President Trump Disrupted DC’s Ability to Monetize Government… and that's why they're so pissed at him.

Ukrainian oligarchs who contributed to Clinton Foundation were not pursued by Obama admin DOJ or Ukraine prosecutors. Is it any wonder that Zlochevsky decided it would be good idea to hire Hunter Biden as protection? https://t.co/6s4wLfMvwU
— Stephen McIntyre (@ClimateAudit) November 21, 2019

WaEx, ‘Classy’: Biden snaps at reporter after being asked about Hunter’s paternity test. Yeah, it's a low blow, but that's the business.

And too much impeachment stuff to meander through:

The Impeachment Carnival Is a Distraction From What Really Matters : The Other McCain

It's Okay Not to Care About All This Impeachment Stuff

Ace of Spades HQ Polls: Support for Impeachment Dropping, Trump Gains on His Democrat Opponents, Now Leading (Within the Margin of Error) Three of the Four Top Democrat Challengers

Ken Starr: This Impeachment Is About Subverting the 2020 Election

In Their Rush to Impeachment, Pelosi and Schiff Overlooked One Little Thing, McCarthy Found It

Turley: House Dems only presented a half a case in a rush to judgment
Posted by Fritz at 5:34 PM