But according to Rushbo, The Real Whistleblower Is Donald J. Trump

At Althouse, "How a CIA analyst, triggered by Trump's shadow foreign policy, alarmed an impeachment inquiry " — a misread headline.


Misread by Meade, looking at the WaPo headline, "How a CIA analyst, alarmed by Trump's shadow foreign policy, triggered an impeachment inquiry."

Meade says, "I think it's more accurate my way."

Switching to impeachyment, at Ace's Morning Rant the gorilla says"


"OK, here are some take-aways from the Democrats' impeachment show trial:

"The president needs to prove his innocence.

"The purpose of impeaching Trump is to make sure he does not get re-elected. The Democrats are openly admitting this. See also here.

"Also, President Trump is being impeached because he tried to 'wrest control' of U.S. foreign policy from 'seasoned diplomats.' (see the second item under the fold). Which is weird, you know, because diplomats, no matter how 'seasoned', are supposed to follow policy, not set it.

"The breath-taking arrogance of this last one is especially galling. The old common wisdom was that the 'Deep State' was just a kwazy konspiracy theory cooked up by kooky konservatives from their paranoid, delusional fantasies. But, upon further reflection, the Deep State is apparently the fourth branch of government, not mentioned in the US Constitution, but nevertheless real and necessary; a bulwark, if you will, that protects the perks, privileges and prerogatives of an unaccountable, bureaucratic elite against American citizens who have the insolence to believe that they're entitled to participate in constitutionally mandated elections." . . .

Matt Margolis PJ Media, Top Democrats Concede They're Losing The Impeachment Battle. The battle is not to win impeachment, but to dirty Trump before the election.


CNN reported Thursday evening that top Democrats are privately acknowledging that the impeachment hearings will do little to persuade the vast majority of the public that President Trump committed an impeachable offense. According to CNN, in a private meeting earlier this week, "House Speaker Nancy Pelosi and her top lieutenants were skeptical about the prospects of a dramatic shift in opinion even as public impeachment hearings began this week, according to multiple sources familiar with the matter." Nevertheless, they intend to carry on, in the hopes that things might change.

From sundance at CTH, Speaker Pelosi Selected “Bribery” For Impeachment Narrative After Focus Group Polling in Key States…, AllahPundit at Hot Air, Confirmed: Dems Switched From “Quid Pro Quo” To “Bribery” Because A Focus Group Told Them It Was Better. A former constitutional law prof, Althouse has doubts in "The reason bribery is now the Democratic impeachment word of choice has less to do with the law than with politics."


"Well, bribery, first of all, as the Founders understood bribery, it was not as we understand it in law today. It was much broader. It connoted the breach of the public trust in a way where you're offering official acts for some personal or political reason, not in the nation's interest...."

Seen in that light, is there anything politicians do that is not bribery?

Teach at Pirate's Cove, New Democrat Narrative: Ukraine Was About An Attempted Crime, Not A Crime Crime. Breitbart, Bureaucrats Fail to Respond to Ratcliffe Question ‘Where Is the Impeachable Offense?’

Congressman @RepRatcliffe asks both impeachment witnesses "where is the impeachable offense in that call?"

From the New Neo, Impeachment can be preventive…

What a great idea, like so many of her ideas.

and The Democrats want to define Trump being president as a high crime and misdemeanor. Mark Levin on impeachment hearings: Swalwell doesn't know what he's talking about. He could have left that unqualified.

From the The Schiff coup: Day one, by J. Marsolo at AmThink


If this were a real trial, the judge would dismiss the complaint and assess counsel fees and costs against the Schiff Democrats for bringing a suit with no basis in law or fact, and brought solely in bad faith to harass President Trump.

Althouse watches Da View, so you don't have to, "Well, Linda Tripp — remember, Clinton was impeached because of Linda Tripp’s testimony, which was complete hearsay!"/"Well, she was not under the desk with Monica. Let’s put it that way. So that’s hearsay." Discussion of the hearsay rule on "The View.". Well, there was the DNA on the infamous blue dress. From the Weasel Zippers, MSNBC’s Maddow: The Impeachment Process Will Unify America… "Yeah, no." Top 10 Tweets from BadBlue Tonight: 11.15.19

Politico whines, Rand Paul may force vote to bring Hunter Biden as witness in impeachment trial.  I don't blame Hunter for trying. I blame his dad for enabling him. 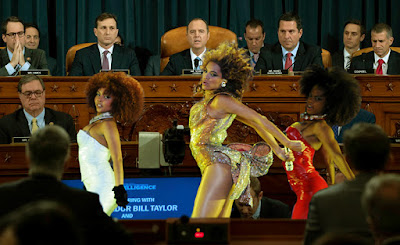 The halftime show will also feature an indoor fireworks display. Ever the restrained and dignified leader, president Trump has vowed to continue to incriminate himself and justify the impeachment inquiry on Twitter before ultimately taking to the stand to scream ‘You want the truth? You can’t handle the truth’.

Of course, no news review would be complete without the conviction of Roger Stone, Jerry Dunleavy, WaEx, Guilty on all counts: Roger Stone, longtime Trump confidant, convicted of lying, obstruction, and intimidation


He was found guilty on five separate counts of lying to the House Intelligence Committee in addition to two more charges of obstructing a congressional investigation and intimidating a witness following a two-week trial that centered on the actions taken by the self-identified "dirty trickster" and GOP agent provocateur during the 2016 election and beyond.

Stone, 67, now faces up to 50 years in prison, a maximum of 20 alone for the most serious charge. Judge Amy Berman Jackson, who has presided over the case since January, will hand down Stone's sentence in February.

The jury found Stone repeatedly misrepresented and concealed his 2016 attempt at collaborating with WikiLeaks and founder Julian Assange to obtain dirt on then-candidate Hillary Clinton and stolen emails when speaking with Trump-Russia investigators from the House Intelligence Committee in a spin-off case from special counsel Robert Mueller’s two-year investigation.

The charges against Stone included one count he “corruptly influenced, obstructed, and impeded” the congressional investigation and another that he attempted to “corruptly persuade” Randy Credico’s congressional testimony. Stone also faced five counts of making “materially false, fictions, and fraudulent statements” to Congress.

Sundance, Roger Stone Convicted on All Seven Counts – Sentencing in February, Faces 20 Years in Federal Prison…  Ace, DC Jury Finds Roger Stone Guilty of Seven Counts of Process Crimes, The Same Crimes That Andrew McCabe, Peter Strzok, Bruce Ohr, etc. Are Not Being Charged With,  "Made Men in the DC Mafia play by a different set a rules than the mere citizens they intimidate and extort." NYPo, Trump tweets about Roger Stone’s conviction, calls it a ‘double standard’. He's not wrong. EBL, Roger Stone Found Guilty 🙀

In more vindictiveness on the part of the Deep State, Rudy Giuliani Investigated For Lobbying And Campaign Finance Violations (Victory Girls).

Aaron Mate at RCI has an expose on The Brennan Dossier: All About a Prime Mover of Russiagate A taste:
From Judicial Watch, Documents Reveal Extensive Relationship Between Dossier Author Steele and Top Obama State Department Officials


Wednesday we learned that DOJ Inspector General Michael Horowitz had submitted his report to witnesses for their review, a final step before the report is released. Last night, the Washington Post published a story claiming that the IG’s office had told those witnesses they were not allowed to submit written feedback on the report. Instead, they would need to give feedback orally. But a few hours later, the IG’s office appeared to reverse itself, saying that wasn’t the case:


The Post’s report, first published early Thursday evening, detailed a series of parameters that some feared could make the final document less accurate. At the time, the Justice Department inspector general’s office declined to comment. But late Thursday night, Stephanie Logan, a spokeswoman, said the office would clarify to witnesses that they could submit written feedback “consistent with rules to protect classified information.”
“As part of our factual accuracy review, and consistent with our usual practice, we are providing witnesses with the opportunity to review portions of the report that relate to them,” Logan said. “Also consistent with our practice, we undertake every effort to ensure witnesses can provide their comments and we are clarifying to witnesses that they will be able to provide written comments, consistent with rules to protect classified information.”

So it sounds as if there was some change here though the Post admits it has no idea what the initial restriction was about. Was it limited to an individual? Was their some specific purpose for it? We don’t know.

At least "We don't know" is generally an honest response.