Reason #6411 that Trump was Elected 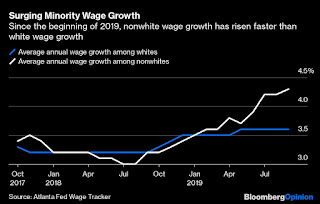 
Despite his reputation for being racially divisive, President Donald Trump’s approval ratings have drifted upward among nonwhites in the last two years. While it’s impossible to say exactly why, one reasonable explanation is that the U.S.’s long economic expansion has been particularly beneficial for minority workers.

There is strong evidence that Trump’s rhetoric on race is hurting him among minorities. Nonetheless, in the latest Gallup poll of presidential job approval, Trump stands at 20% among nonwhites, up from a low of 14% in January. For comparison, the president’s approval ratings among self-identified liberals and moderates are 6% and 29%, respectively.

While Trump’s tweets may be hurting him among minorities, the economy is no doubt helping. As the president is fond of pointing out, unemployment rates among African Americans, Hispanics and Asians are all at historic lows (though it should be noted that data on Asian unemployment rates dates to only 2000).

Just as important, the unemployment gaps between both blacks and whites as well as Hispanics and whites have reached all-time lows. It’s not just that the job market has been good: For minorities, it has been historically good.

Of course, being Bloomberg, they have to downplay it subsequently, and take a few digs at Trump in passing.

Linked at today's If All You See… at Pirate's Cove.
Posted by Fritz at 6:33 PM