Yesterday was the long awaited testimony of EU Ambassador Gordon Sondland, who, as promised in his closed door testimony, attempted to tie President Trump to a quid pro quo, of demanding investigation of corruption, and more specifically Burisma and the Bidens, in exchange for releasing lethal military aid to Ukraine. And that's how it has been and will be reported in the headlines: Yahoo! US envoy says followed Trump orders in Ukraine 'quid pro quo', Reuters, U.S. diplomat Sondland says he followed president's orders on Ukraine. WaPoo, Sondland implicates Trump in quid pro quo, says Pence, Pompeo knew. Da Beast! Ken Starr: GOP Senators Might Consider Having to ‘Make a Trip’ to the White House After Sondland’s Testimony

But what he really said was something slightly different; Hot Air, Sondland Opening Statement: The Quid Pro Quo Was Real, And It Was Spectacular; Update: Trump Never Told Me About It “Ever”. It turns out that no one ever told him there was a so called quid quo pro, he just inferred it from the course of events, and it wasn't about military aid, it was about a one on one meeting with Trump. WaPoo again, Diplomat says Ukraine leader couldn’t get a White House invite — unless he announced probes. Allah Pundit, Hot Air, Sondland: My Understanding Was That Zelensky Had To Announce The Investigations — Not Actually Do Them, which makes a lot of sense, since actual investigations take painfully long, as we should be aware by now. As pointed out in, heaven forfend, Da Bulwark, Sondland's testimony was highly contradictory. Via the Wombat's In The Mailbox: 11.20.19 (Morning Edition), Twitchy: How Fake Is The AP’s Fake News About Ambassador Sondland?

First we were told Trump broke campaign finance law. That was a dud. Next came “quid pro quo” for defense money. That was false. Then Democrats rolled out “bribery” because it polled well. That fizzled.

Trump, of course, see's total vindication, Trump: Let’s Face It, That Gordon Sondland Testimony Was Pretty Fantastic For Me (Allah Pundit), while Republicans actually had to work to elicit how Sondlands conclusion was merely an inference and not documentary fact. Matt Margolis PJ Media, Amb. Sondland Admits He Has No Evidence Trump Tied Ukraine Military Aid to Investigations Other Than His 'Own Presumption' From Herr Professor at  LI's While you were watching Gordon Sondland, Trump flipped the 11th Circuit

Sondland: “no one on this planet” told him aid was tied to investigationshttps://t.co/0s0K1IjAQs pic.twitter.com/9Z2OVJqWJo
— RNC Research (@RNCResearch) November 20, 2019

In the Department of "Nothing Exceeds like Excess" Sundance at CTH has clips as Turner, Jordan, Ratcliffe and Stefanik Question Ambassador Sondland…. drive home the point. We already saw Turner, so Jordan:


What did Mike Pence know, and when did he know it? According to Gordon Sondland, he told the vice president on September 1 that he believed that military aid to Ukraine had been stalled as leverage for investigations into corruption. Sondland included this in his opening statement
. . .
Not surprisingly, Adam Schiff drilled down into this immediately during Sondland’s live testimony. The testimony itself is rather weak sauce, even if did prompt a strong response from Pence’s office:

Note here that this testimony has the same weakness as Sondland’s statement. Even taking this at face value, Sondland’s testifying that (a) he believed that there was a linkage between the military aid and the investigations, (b) Pence “nodded” when Sondland aired his opinion, and (c) the topic of aid came up in Pence’s conversation with Ukraine. That’s not very compelling in terms of a dictated quid pro quo. Sondland’s testimony is just that Pence “nodded” at the notion, not that he got any indication of confirmation or even factual knowledge of Sondland’s belief.

Pence’s office didn’t let it slide, however. In a statement sent out widely to media via e-mail, including Hot Air, chief of staff Marc Short blasted Sondland’s testimony as false. The conversation that Sondland described “never happened,” according to Short . . .

In some cleanup of previous testimony fall out, Bonchie at Red State thinks Kurt Volker and Tim Morrison Finished Their Testimonies and They Were Bad for Adam Schiff. Capt. Ed, Bondi: Of Course Trump Wants To Testify In Impeachment Hearing — But He Won’t

And things that make you go Hmmmm! Ukrainian Intelligence Sources Report Ambassador Yovanovitch Lied To Congress, Protected Russian Oligarch On Sanctions List. But if their intelligence agencies are as rogue as ours, I would demand video.


"No evidence" of anything worth investigating, the media keeps telling me.

- Ukraine has widened its investigation into the founder of energy company Burisma to include suspicion of embezzling state funds, Prosecutor General Ruslan Ryaboshapka said on Wednesday. . .


Dobinsky, the MP, says there is a "signed suspicion" at 1:19 in the video below. This has been described in Ukrainian media as an investigative step which documents allegations against an individual or individuals, similar to a criminal referral. While Donibsky says during the press conference that "Zlochevsky was charged," we have updated our headline and report accordingly.

A transcription of key portions of the press conference can found here, via Tanya Tay Posobiec.

Ace again, NBC: Ha-Ha, Conservatives Reported the Story about the Founder of Burisma Being "Indicted," and He Totally Wasn't - Ukranian Translator: The Press Conference Says a "Sworn Statement of Suspicion" Has Been Issued Against the Burisma Founder


You tell me: Who's doing their best to actually report the news?

Here's the chuckleheads at NBC, who still aren't reporting this story, except as a partisan "Gotcha" about conservative websites.

I think this would be the equivalent of our DOJ sending out a Target Letter. Analysis from Byron York, WaEx, What if Trump was right about Ukraine?


One of the most important issues in President Trump's impeachment defense is also one of the least explored: To what degree were Trump's concerns about Ukraine valid? It's well documented that the president fixated on Ukrainian activity in the 2016 election and on the Bidens' actions in the Burisma matter. Democrats and many in the media dismiss his concerns as "conspiracy theories." But to what extent were those concerns, in fact, legitimate?

If they were even mostly legitimate, then Trump defenders could say: "Look, he had a point. Even if one thinks he handled the issue inappropriately, the fact is, what was going on in Ukraine was worrisome enough for a United States president to take notice." That would not change minds among those dead set on impeachment, but among others, it would make the case for impeachment and removal much harder to make.

Of Trump's two concerns — 2016 interference and Biden/Burisma — the 2016 part came first and is the foundation for Trump's later concerns about the former vice president. So leave the Biden part for a later article and focus on Ukraine and the 2016 election. Republicans insist Ukraine did, in fact, try to interfere in the American political process in 2016, and they point to five examples . . .

The Blaze, Rudy Giuliani says US diplomats were doing the bidding of George Soros in Ukraine, in interview with Glenn Beck "Giuliani also says he knows Ukrainian prosecutors who can back his claims." Rudy says a lot of things. Show me the evidence.

Ren Jander at AmThink, President Trump Never Impounded Even One Dollar from Ukraine Aid. It down in the weeds, but read it. Half the money had already been sent and spent by the time the events we are arguing about occurred. WaPoo whines, U.S. military aid bolsters Ukraine’s front lines, but the Trump drama makes Kyiv nervous'


A guy who lies and lies and denies the paternity of his child certainly would never use his political connections to Pappy Biden to grift favors for the company paying his unqualified ass $80,000 per month.

And we're still concerned with the "whistleblowers"; or at least the FBI is, YaHoo! FBI seeks interview with CIA whistleblower, WaPoo, FBI asks to interview the CIA whistleblower,  Sundance, AP Report: Chris Wray FBI Wanted to Interview Whistleblower Last Month – Interview Never Happened… Apparently not a "leak" investigation, but maybe they'll pull a Flynn on him. Kerry Picket at WaEx reminds us 'Bro-like': Schiff aide was White House friend of alleged whistleblower Eric Ciaramella. Washington is really a small town, at the top of the pyramid. At WaEx, 'I get upset': GOP congressman demands Schiff explain legal authority to conceal whistleblower.

Matt Margolis at PJ Media gives us Ten Reasons Vindman’s Testimony Was Bad for Democrats. He sure wasn't no Ollie North. 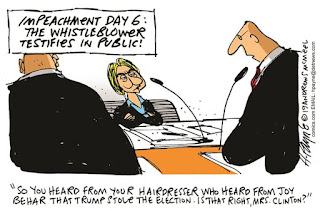 
The summary Vindman wrote after the call read:

President Trump underscored the unwavering support of the United States for Ukraine’s sovereignty and territorial integrity – within its internationally recognized borders – and expressed his commitment to work together with President-elect Zelenskyy and the Ukrainian people to implement reforms that strengthen democracy, increase prosperity, and root out corruption.

But Vindman clarified during his testimony that the president did not bring up the topic rooting out corruption during the phone call, but he included it in his summary of the call anyway.

When asked by the Democrat counsel about whether the summary he wrote was false, Vindman hesitated. “That’s not entirely accurate, but I’m not sure I would describe it as false, it was consistent with U.S. policy,” Vindman said.

Vindman said he included the rhetoric about corruption as a “messaging platform” to describe U.S. policy toward Ukraine, even though it was not discussed on the call.

So to him it was important that the call record reflect what Maj. Asshole Lt. Col. Vindman wanted, not what was actually said. Ruhbo has a good question, Who’s at the Top of Vindman’s Chain of Command? Because it doesn't appear to be the President of the United States.Also via the Wombat's In The Mailbox: 11.20.19 (Morning Edition), Weasel Zippers Schiff Steps In To Help Vindman Protect Whistleblower, Accidentally Exposes Another Lie and This Ain’t Hell: Venkman Still Speaks and Legal Insurrection: Nunes’ Opening Statement – “Media Are Puppets For The Democratic Party”,  Did Vindman Leak To The Whistleblower?


Update: Fox responds in an email: “As a guest on FOX News, John Yoo was responsible for his own sentiments and he has subsequently done interviews to clarify what he meant.”

Ned Ryun at AmGreat, How to Shut Down the Democrats’ Alternative Universe "President Trump needs to be far more serious in his second term about personnel, ensuring the executive branch is filled with staffers working on his administration’s behalf every day." Fire 'em all, and start over. 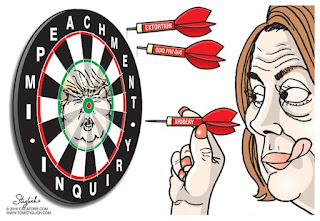 On the impeachment nonsense the Babylon Bee finds Poll: Majority Want Impeachment Hearings To Continue As Long As Possible So Congress Will Be Too Busy To Meddle With Our Lives. Attention Snopes, the Babylon Bee is a parody site. But Ace has some real bad news (for Democrats) Oh, Dear: In Crucial Battleground Wisconsin, Support for Impeachment Falls 4%, and Trump Now Leads... The Entire Democrat Field and Trump Now Beating Democrats in Wisconsin as Support for Impeachment Plummets (Rick Moran, PJ Media)


On Monday, Kash Patel, a White House official serving on the National Security Council (NSC), filed a $25 million lawsuit against Politico, alleging that Adam Schiff, the California Democrat, leading the sham impeachment against President Trump, “weaponized the media” with defamatory information to advance his goal of removing the president from office.

Patel, Breitbart says, is a former staffer to Rep. Devin Nunes, R-Calif., who moved to the NSC to advise President Trump on national security and intelligence matters.

The suit, filed in Virginia, names Politico reporter Natasha Bertrand and Robert Allbritton as defendants and says they worked with Schiff and members of his staff to defame him.

and (NYPo), Giuliani slams GOP impeachment lawyer, demands apology. Yeah, good luck with that.
Posted by Fritz at 9:37 AM